If not us, then who? Volunteering with refugees at Moabit Hilft

I spent last Wednesday serving lunch to refugees with the volunteer group Moabit Hilft. The unmistakable sound of chanting protestors boomed towards us from the main street while my friend Lisa and I carted our tray of minestrone soups and schrippen around the park. We hoped that these newcomers couldn’t understand the demand of the Nazi demonstrators cry: “the boat is full – deport asylum fraudsters!”

People languish here, often waiting for days, to have their number called and the opportunity to present their case for asylum. The park, a grassy patch between a series of LaGeSo administration buildings – the Senate Department for Health and Social Affairs – is where thousands of refugees have camped throughout this summer, waiting in the hope of being housed. For some, the wait has been up to 10 days.

When we returned to the tent to collect our next round of soup, the supply had run out. The next soup delivery was trapped in the rowdy demonstration, the Nazis inadvertently preventing a hot lunch from being delivered to refugees.

Luckily there were packaged sandwiches and so we began our next round to those still waiting. Some looked at us as if to ask, “where’s the hot lunch?” When the soup eventually did get through for distribution, many of the people were now full on sandwiches. No longer hungry for soup, thank you. 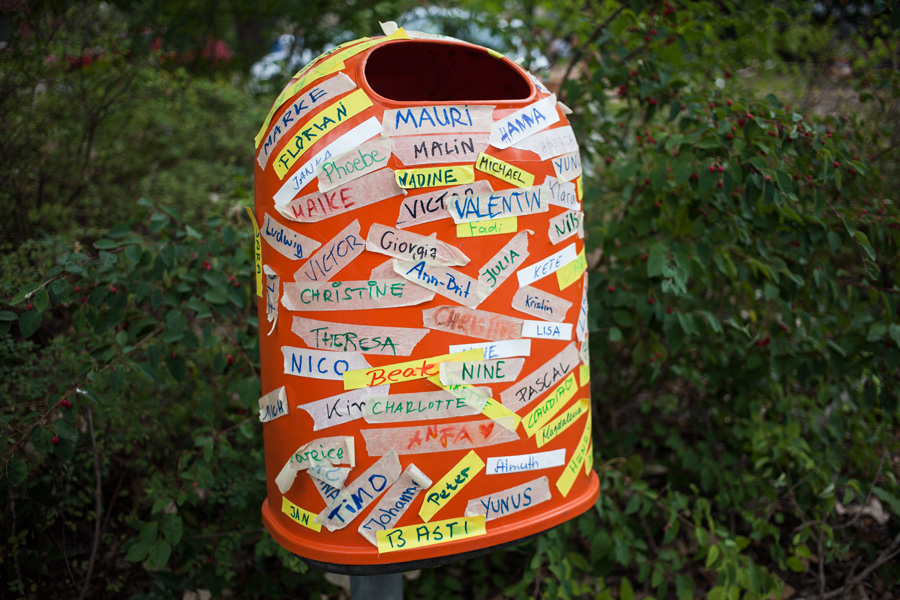 A classic orange Berlin rubbish bin where volunteers ‘clock out’ at the end of each shift by placing their nametags on the bin, which is now covered with hundreds of names.

As we’d found previously, many people queuing weren’t hungry for anything – nerves, possibly. A new queue had been set up to wrap around the building. Patrolling security guards asked our group not to feed this queue but we handed out a few bowls of soup while they weren’t looking.

Later we would learn that there were only eight Nazis protesting out on Turmstrasse. It was the gegendemo – the hundreds of Greens and Antifa – that had really caused the disruption. This is Berlin, after all.

“We’re doing the best we can” sums up the sentiment of the Moabit Hilft volunteers pretty well. Over-exhaustion, hungry children, logistical challenges and humanitarian concerns: all things that drive the base instincts harder. In this case, the instinct is simply to help.

Earlier that morning while my friends and I stood waiting for volunteer tasks, my boyfriend called to say that, after three months of searching and viewing more than 50 apartments, finally we had scored one for ourselves. Searching for a place in Kreuzberg or Neukölln, we’d run up against rising rents, high competition and increasing anger towards gentrification – a hot topic at Give Something Back to Berlin and one you’ll hear plenty more about on this blog. It had felt as if our waiting had taken forever, but now my excitement for our new home seemed hollow as I wandered around serving hundreds of people who had no place to go but this park.

Spend just an hour at LaGeSo and you’ll see that while Germany’s people might be globally lauded for their welcoming spirit, its system still has a long way to go. It’s not all smiling and waving at train stations; here in Moabit the next step on the refugee journey is queuing for days at a time. There’s a lack of information about which queue leads where, when the process might end, talk of corruption within the queuing system, sleeping in parks without shelter and relying on food donations. There is little dignity here.

Refugees waiting for their numbers to be called.

And yet there is hope:

…in the boy, no more than 10 years old, who hung around the food tent for enough consecutive days that hospital services operator Vivantes, in charge of providing food to the refugees outside LaGeSo, gave him his own branded apron and hat. He now dishes soup into our bowls for his fellow refugees.

…in the woman who still bothers to apply makeup before her appointment inside LaGeSo.

…in all the volunteers, enough on some days that some get turned away, giving a day or a few hours to serve others.

…in the refugees wanting to serve each other, asking where they can pick up some gloves and lend us a hand, learning enough German on their smart phones to ask us, “Brauchen Sie Hilfe?” There is no doubt that these people want to contribute to our society. They are giving back even before they have received.

At Give Something Back to Berlin these past weeks, the sense has been that the tide is finally turning. People who might usually turn away from others in need are now awake to the call. Not just Berlin, but Germany has been overwhelmed with compassion, generosity and the feeling that it is our responsibility to help. If not us, then who? If not now, then when?

In for the long haul

Engagement culture is certainly having its day with many spontaneous initiatives popping up across Berlin to support the refugee cause. It’s exciting and inspiring to witness, but how can we keep this up?

To create long-term sustainable engagement, we need organizations like Give Something Back To Berlin. For the past two years already we’ve been working for and together with self-organized refugee initiatives establishing a successful track record with the projects we undertake. Like the refugee music collaboration that developed into a real band, the weekly social cooking events to strengthen friendships between refugees and non-refugees, and the English and German classes that have been running every week for two years now. Responding to the current need is only the beginning of htis vital work. We’ll be here working with refugees long after the hype dies down.

We know you don’t want to let this energy go to waste – together we have a unique chance to build a new culture of living together; in Berlin, Germany and Europe. This week we launched a crowdfunding campaign so you can be part of supporting our growth as we ramp up our operations. Funds will be used to help us continue building our network to adequately support and realise the extensive potential of Give Something Back To Berlin.

Come along for the ride

On this brand spankin’ new GSBTB blog, also launching this week, we’re going to be covering migration, social innovation, volunteering, inclusion, diversity and all that good stuff that makes our grand city tick. Join the ride, we can’t wait to share this journey with you.

Vanessa Ellingham is a freelance journalist and editor based in Berlin. She writes for Fairplanet.org and edited the Slow Travel Berlin Anthology published earlier this year.

Photos by Timo Stammberger, from his photo series Humans of LaGeSo.