The Geoscientist running #BIKEYGEES on volunteering, start-ups and female empowerment

Christina Homburg speaks to Dr. Anne Seebach, co-founder of #BIKEYGEES, where GSBTB volunteers are supporting newcomer women to explore the city by bicycle.

Hi Anne, thanks for taking the time to speak to the newly re-launched GSBTB website and blog. As one of our active and longstanding community members, we wanted to share the story of #BIKEYGEES with our readers. So firstly, can you tell us a bit about yourself, your background and how #BIKEYGEES started?

Well my story isn’t so straight-forward. I actually come from a Geo Sciences background and have a PhD in this field. I worked in this area for a short time, however due to a lack of job opportunities, I moved into tech recruitment over five years ago and I am still doing that now.

About 1.5 years ago, I took a sabbatical and as part of that wanted to take some time to give something back, particularly with refugees, given what was happening in the world at the time. During that time I helped in a refugee shelter in Moabit, which was a great experience, along with other small projects. Whilst in Sri Lanka, my co-funder Annette approached me, (we had previously met at a job fair) with the idea of starting a project related to getting women on bikes. The initial concept came from the fact that woman are always dashing off to appointments and I, having grown up in Bremen, was always used to having a bike and with that the freedom that it brought. Because a bike isn’t just a mode of transport. It enables you to see a city in a very personal manner, without reliance on public transport or harm to the environment. 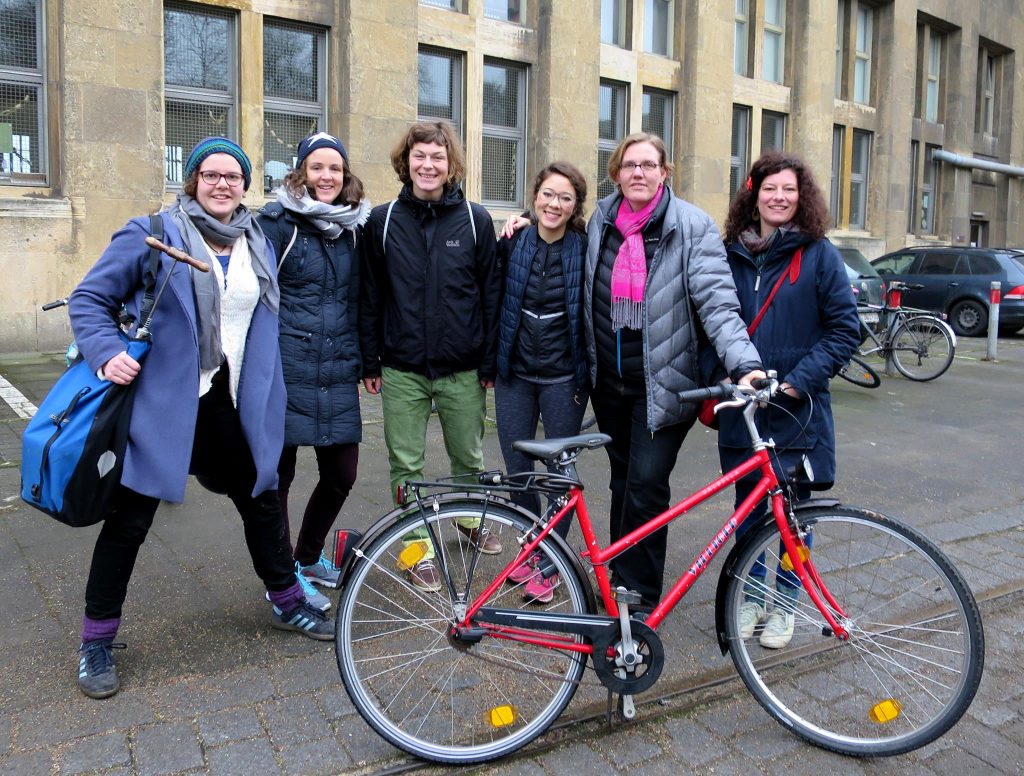 From this very basic concept, the idea grew, and we started giving training courses, with regular attendees eventually receiving bikes, helmets and equipment. In 2016, we were able to move to a permanent location at the Jugendverkehrsschule Wassertorplatz, where we provide training once a month, whilst continuing to engage refugee shelters directly with 1-2 exclusive sessions in the same period. It’s been a steep learning curve but Annette and I have always been clear of our goal and mission for the project and we are now seeing that come to fruition.

How did #BIKEYGEES become involved with GSBTB and how has that relationship evolved?

Initially the relationship was started through one of our participants, however it has since developed into a long-standing friendship. GSBTB have supported #BIKEYGEES through advertising the project, workshops and training through their website and enabling us to reach a wider audience. As such the programme has grown substantially with 283 women now trained to ride bicycles. Our ladies come from a wide range of countries, although most are refugees from Syria and Afghanistan. Nevertheless the training is open to all woman and we have had some European ladies approach us recently about taking part. The only restriction is that attendees have to be over 14 years. 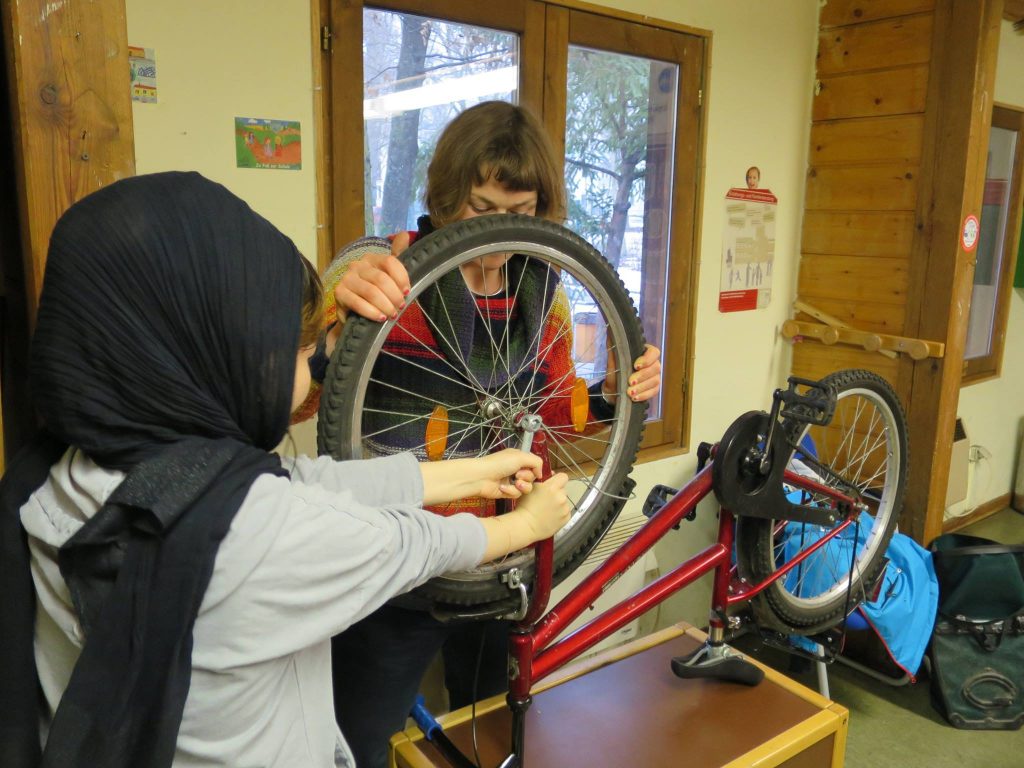 Speaking English or German is not a necessity for the course, and we do translate important documentation into multiple languages. But most of the time, we don’t require language and the warmth and commitment of all of our volunteers goes a long way in communicating the important messages.

#BIKEYGEES recently won an award. Can you tell us a bit more about that?

Yes we won the ‘Hatin Sürücü’ women’s rights prize for female empowerment. Fifteen projects were nominated in total, so we are very proud to have won. The award was originally commissioned by the Green party, in memory of a young woman who died in Berlin at the hands of her family, after trying to break out on her own, so it is very fitting for what we try and do with #BIKEYGEES. 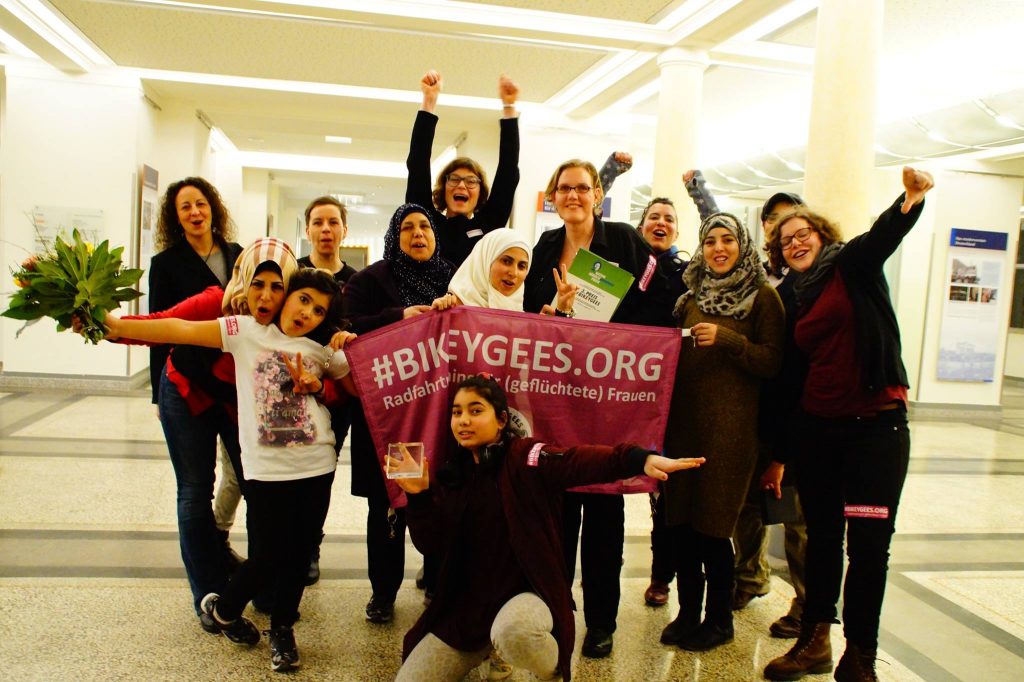 So what’s next for you and #BIKEYGEES?

We have been fortunate enough to have a lot of success quickly, as the project works under a very low-cost model. We have over 200 volunteers, some whom attend every training session or come regularly and we have a lot of support with the city. Nevertheless we want to expand the project into Europe and have applied for funding to help us achieve this.

As a founder of a successful start up, do you have any tips for anyone out there who would like to do something similar?

Absolutely. The most important thing for success is fun, being able to laugh together and not forgetting why you are doing this. Some of the ladies that we work with are never going to be able to ride bicycles and in these instances we provide large tricycles. The moment they get on these ‘bikes’, the smile on their faces, that sheer happiness, it really reminds us why we do what we do. Remembering that is without a doubt the most important thing for success. And if anyone is interested in our business model, then we are more than happy to share our knowledge and expertise.

Any final thoughts for the GSBTB readers?

Yes. Just a huge thank you to all our wonderful volunteers and the platforms and channels that we are able to communicate on that have helped this project be such a success.

Christina Homburg is a finance manager and photographer from London, currently working and studying in Berlin.