Five years of memories and LOLs

This week Give Something Back to Berlin celebrates five years since the Facebook post that snowballed into what is now GSBTB.

It’s been five years of incredible highs, disastrous lows, tons of love and connection, insane hard work, surreal craziness and everything in between.

Of course it’s an awesome feeling to celebrate and reflect on what we’ve achieved so far. But this week we’re also taking some time to remember just how much we’ve learned – and how often we had no idea what the heck we were doing! Growing something big, bold and beautiful definitely includes a lot of laughs.

After the excitement around the viral Facebook post that got our original idea going in May 2012, Annamaria remembers our first community meeting being a bit of a flop.

“Everyone had been ‘soooo excited’ and like, ‘vamos let’s do this!!!’ But the meeting ended up being a lame gathering with just five shy, mismatched people (most of them my friends) at the Roma Theatre Café. Still, one year later Give Something Back to Berlin officially launched and skyrocketed from there. It’s a good lesson in never judging shaky beginnings.”

Three years after that initial meeting and the hype around the ‘refugee crisis’ was spiralling out of control in the media. Having worked with newcomers since 2013 we found ourselves right in the centre of the chaos.

At our Community Team Up event in September 2015, more than 200 new Berliners showed up to find out how they could get involved. Lucky we stuck it out after that first five-person meeting!

Autumn 2015 was a huge time of growth for us, but whenever we checked back into our poky, 13-square-metre office, our organisation was still only staffed by a couple of people working for 450 EUR a month. That didn’t stop outsiders from imagining us to be something much bigger.

“One of the funniest things was when a group of 80 American politicians and activists asked to come and visit our ‘headquarters’ to learn about our work. We said, ‘it’s going to be pretty tight in there!'”

One thing so many people asked us about during that chaos of late 2015 was how to donate items to refugees.

We were trying to direct people to donation centres because we didn’t have anyway to store or manage donations ourselves. At GSBTB we were focusing on forging human connections, rather than the distribution of supplies.

So when a woman showed up at our office door asking whether we could accept some donations she had collected in Dubai, a stressed-out Lucy prepared to turn her away.

“But then we found out she was a Syrian woman herself, working as a journalist for Al Jazeera, who had been fundraising among her network in Dubai. Diana was standing at our door ready to hand us 5000 EUR in cash to support our work!”

Suffice to say we accepted the donation and sheepishly invited her for in for tea, extremely humbled that this woman had decided our organisation was one she felt she could support. “Refugees need more than clothes and teddybears,” she said and we couldn’t agree more.

Annamaria remembers some of other donation-related challenges:

“At one point our server almost crashed with all the people who were wanting to get involved. So many positive things came out of this interest, but sometimes people’s initial reactions and ideas could have been a little better thought through.”

“There was the girl who called me, hysterical, from the Netherlands, wanting to take a taxi from Amsterdam to Berlin to ‘help in the refugee crisis’. And the guy who’d made too much pasta and aggressively demanded that we tell him where he could go to give his two portions of leftovers to some refugees.”

“Plus the Christian missionaries from the US who wanted to come visit us in Germany to ‘investigate how God was operating during the refugee crisis’.” 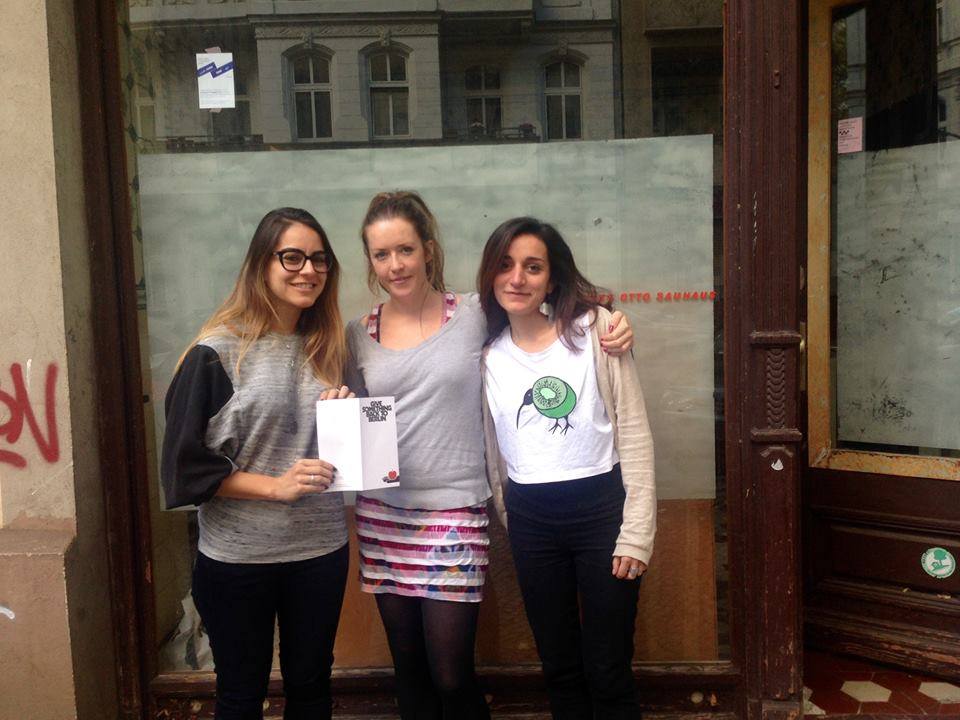 Lucy and former intern Alessia receive the donation from Diana.

By the end of 2015 we were exhausted from the year’s work, but wanting to celebrate with an end-of-year party.

“We might have been able to manage hundreds of volunteers, but coordinating the Christmas party brought us to our knees. I’ll never forget the team meeting where Lucy told us, exasperated, ‘I’m not sure if I’m more worried about this UN funding proposal or how to heat up the Glühwein!’

Well, we ended up winning the top prize at the Intercultural Innovation Awards from UNAOC and BMW Group the following year, thanks to her application. And we also drank a fair amount of lovely warm Glühwein at the Christmas party. Done and done!” 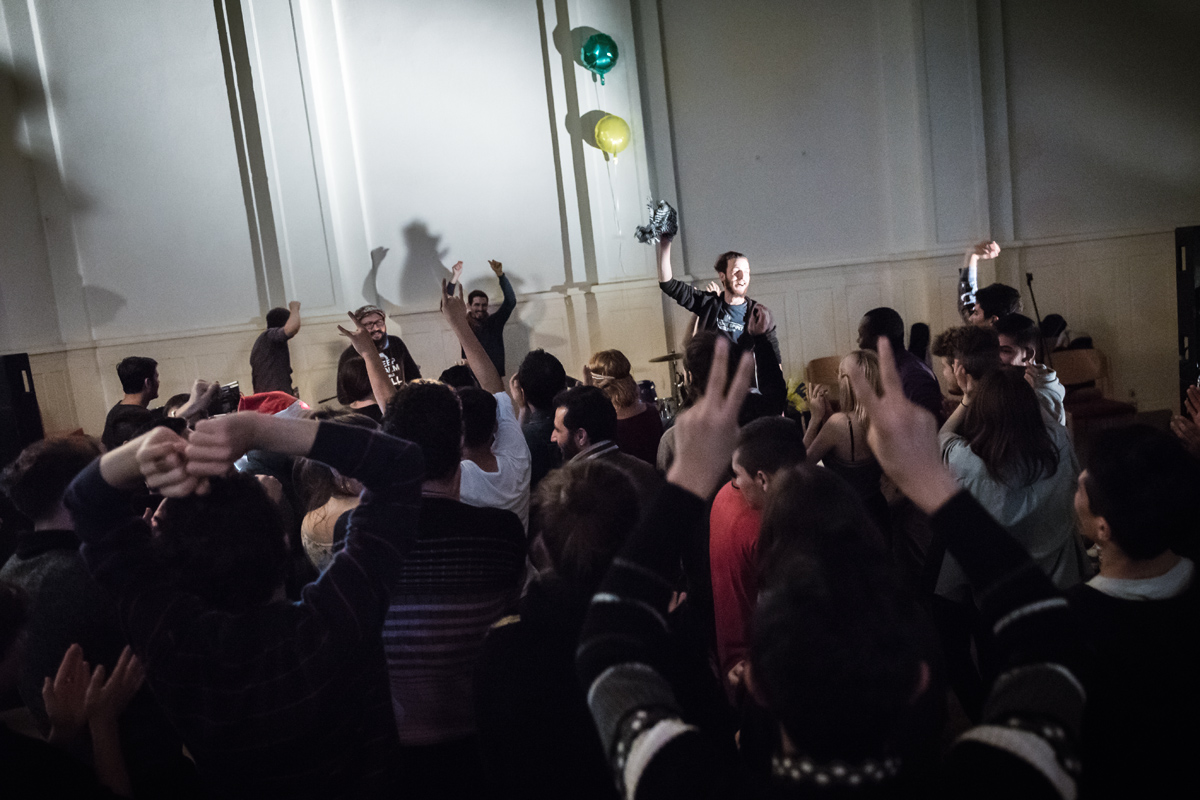 By 2016 we’d added three new team members to manage our projects, as well as a new intern, Max.

Annamaria remembers being so impressed with Max’s CV that she put off a meeting with a really important boss at BMW Group to make sure she got to meet him. Max did end up becoming our dream intern and then, later, an employee.

“We’re not quite sure how often the CSR boss of one of Germany’s biggest companies gets de-prioritised for a potential intern – but I think she was rather surprised!” – Annamaria

Max has also experienced the challenges of receiving donations.

“Last year we were offered ‘some Christmas presents’ and we just said ‘yes’ because we thought it might be nice stuff for the kids in Open Art Shelter. Then I go to the warehouse and there’s just a MASSIVE amount of crates full of presents. I end up having to emergency-call a professional house-moving service, frantically loading crates into the back of a truck as if we’re loading stolen goods because the driver had just squeezed me in between two other jobs.”

It’s incredible how generous some people are, and of course we’re very grateful. The children were, too! 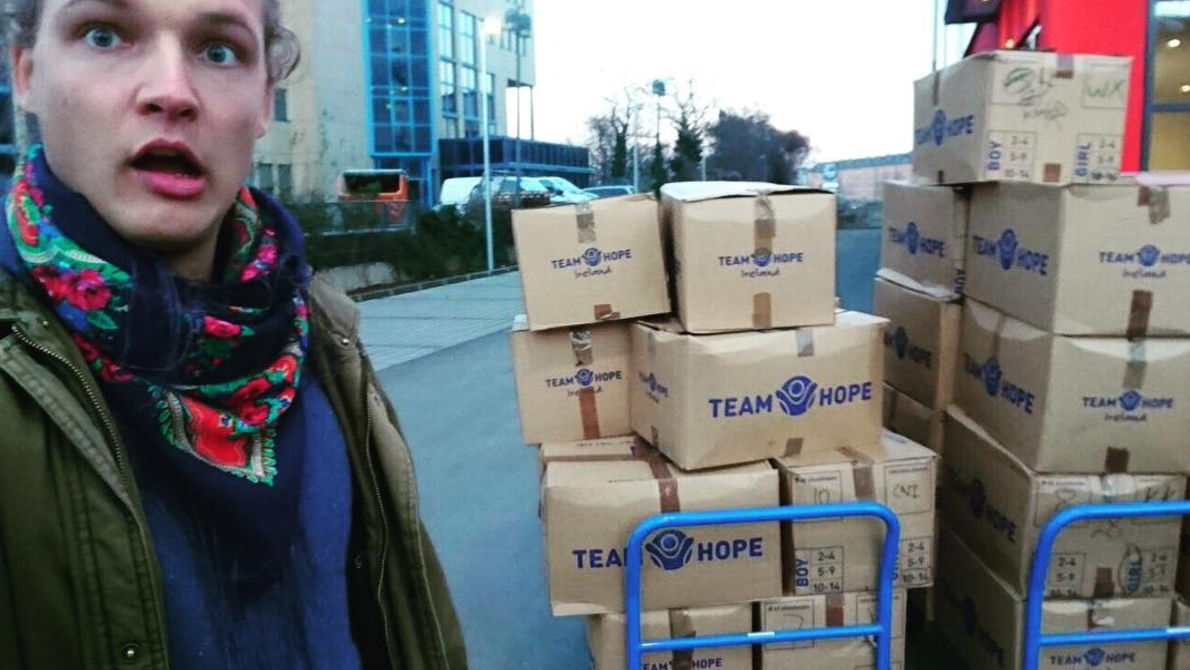 “The summer of 2016 was a really exciting one for the GSBTB Open Kitchen. We were approached by some of the biggest names in cool catering that Berlin has to offer. After a first super-successful, sold-out day with Bite Club at Umspannwerk in Kreuzberg, the second edition was well on the way.

But alas, the weather forecast was not on our side and there was a lot of toing and froing. Nobody was sure whether we should go ahead or reschedule for another week. Finally, the decision was made, we’d stick to the plan.

The food is ready, the team is ready and everything is set up. But the occasional glimpse at the sky does not provide a comforting sight. People are slow to arrive and, looking at the clouds piling up overhead, we don’t blame them. Suddenly, the heavens open and monsoon style rain sweeps over Kreuzberg. We run for cover, but in the tunnel-like Innenhof of Umspannwerk, there’s not much shelter to be had. The wind is howling through the brick walls and sends everything flying. Seriously, EVERYTHING! Food, flowers, tables, speakers, people. After an hour of intense downpours and gusts of wind, things calm down again and we pick up the pieces.

We definitely learned our lesson today. Listen to the weatherman, children. He’s usually right about these things. That’s his job after all.”

Someone always has to mash the meat.

The GSBTB Open Kitchen crew would go on to recover from the experience and serve up more delicacies at Markthalle Neun. They’ve got more exciting social cooking events planned for this year.

Hania runs the GSBTB Open Art Shelter, a project we’re all really proud of, and one that’s delivered some of our biggest laughs since it launched in 2015.

There was the time Hania accidentally scheduled an event for 1.00am, instead of 1.00pm, and someone showed up in the middle of the night. And the time knitting needles were deemed to be too dangerous for the Tempelhof refugee shelter. Our volunteers were allowed to continue the knitting circle with the women residents, but only if they agreed to refer to the knitting needles as “big plastic sticks”.

And there was more.

“It was in summer 2016, when we organized an Open Art Shelter at Klunkerkranich rooftop bar. We’d planned a family afternoon with painting, origami, knitting and a simple drumming circle. One of our volunteers went to Malteser Notunterkunft (a refugee shelter) to invite the residents to the beautiful roof. Except he advertised the event as a dancing party with a lot of girls. Perhaps predictably, around 60 guys showed up. We were a little bit panicked, but we spontaneously adapted the plan and used paper, crayons and pencils for a German language lesson.

Among the guys was a musician from Afghanistan, who noticed the drum and ended up really enjoying himself.”

We were back on the Klunkerkranich rooftop for a Community Team Up later in the summer. Vanessa spent most of the evening pulling children out of this giant dog’s bum.

Tom runs the GSBTB Open Music School, where another poorly-attended meeting ended in an incredible experience.

“Not long after setting up the first piano and guitar classes in early 2016, we were excited and looking for others to start. I held an open meeting for people to share ideas for what we could do next. I think three people came, which was a bit disappointing.

Two of the people were interested in signing up to be piano and guitar teachers. But the third was a man in his late 50s, with a weather-beaten face.

He was wearing a black t-shirt with a shiny red Anarchy symbol on it, a Guns n’ Roses head bandana and plenty of jewellery. He said things like, ‘rock n’ roll is the freedom to tell people to f**k off and just be yourself, man’.

The others left after we talked about the classes and exchanged contact info. He stayed, however, and after a confusing conversation in which I tried to find out what he actually wanted to offer, he said he’d like to teach the recorder or tin whistle. He then pulled a tin whistle out of nowhere and proceeded to perform Aqualung by Jethro Tull, in full, for a one person audience: me. It was pretty amazing.

I invited him to discuss the tin-whistle more via email and future meetings, but I never heard from that mysterious rock n’ roll minstrel again.”

The past five years have given us enough memories to last a lifetime. A couple more of our favourites include:

Here’s to five more years of making worlds meet working together for a better city, and hopefully more hilarious memories! Thank you for your support.