“You never forget where you come from”

Annick Repellin-Holzgreve is a long-serving GSBTB Open Art Shelter volunteer and long-time resident in Germany, originally from France. Here GSBTB summer intern Madeline McKay interviews Annick about her experience as one of the more mature members of the group, volunteering with a new generation of newcomers every week at Tempelhof Refugee Shelter.

Where are you from?

How long have you been involved with GSBTB broadly, and Open Art Shelter more specifically?

About two years. I’ve been with Open Art Shelter from the very beginning.

What has it been like to be around for that amount of time? My sense is that with Open Art Shelter, a lot has happened during that time and it’s changed and grown in many ways.

It has evolved, it has changed. At the beginning in Tempelhof [Refugee Shelter] we had planned activities. We would have to plan one or two activities for Monday, so that when we arrived, we knew what we were going to do. So we offered the children, also adults but mainly the children, crafts or something like that. And, over the months it has changed to be more personal contact with the people, which I find a good thing. I think that’s what is really needed. 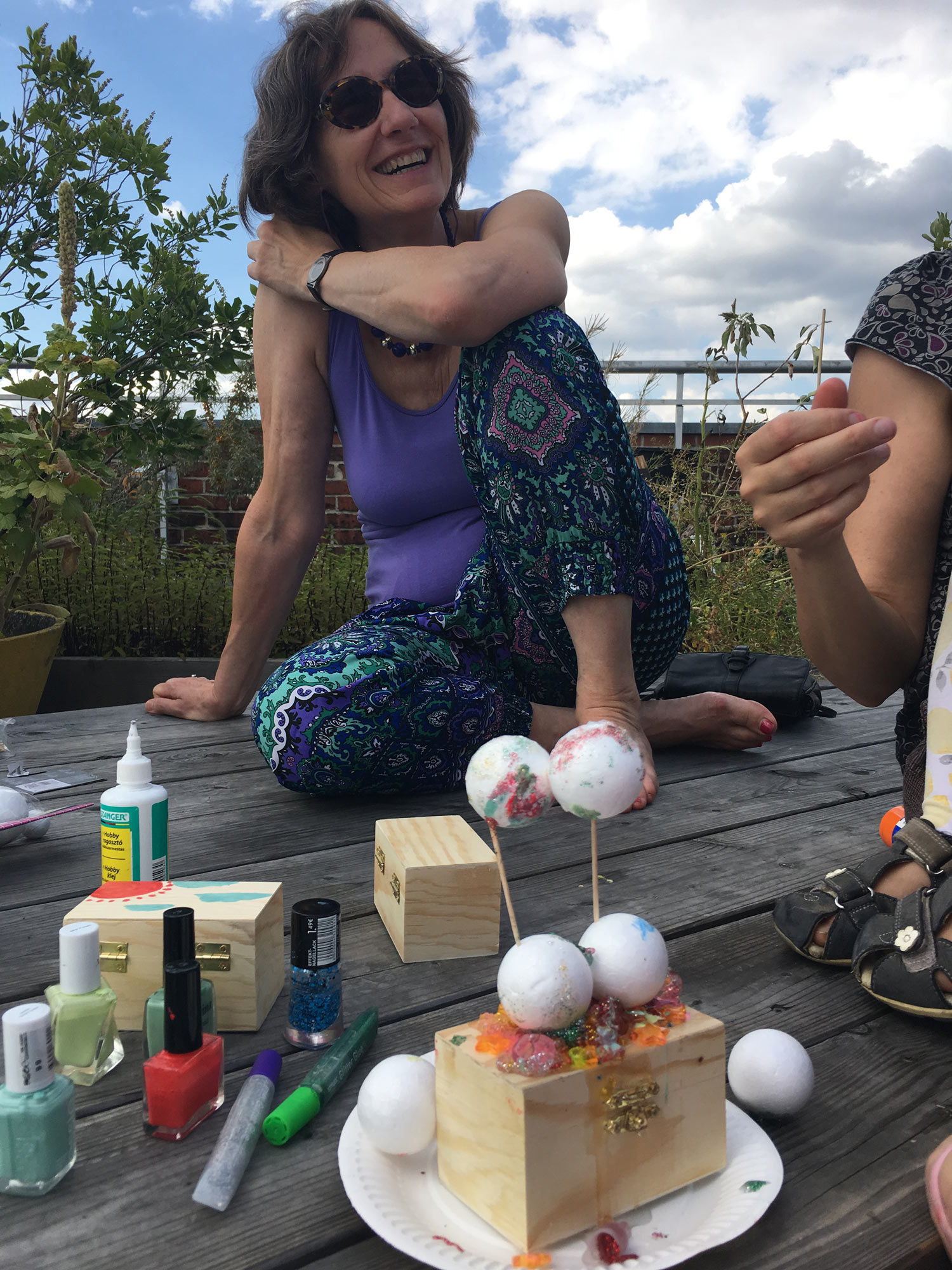 You have mentioned that you’re older than most of the people volunteering with Open Art Shelter. Is that something you think about, or has that been strange for you?

Well, I suppose they got used to it and I got used to it, too. But at the beginning it was challenging because, you know, it sounds stupid, but one of the problems was that technology is somewhat difficult for me. I had a Facebook account that I never used and then I discovered all the communication on the group was through Facebook and Messenger. After a while I thought, “okay, I have to do it”. So now I go to Facebook regularly, you know when there’s a group, when there’s a meeting, when there’s a change. And sometimes I don’t see the change because I didn’t remember to go to Facebook. Or I think of it too late, and I’m on the way to some place, and then I see, “oh no we’re not in Lichtenberg, we’re in wherever.”

Do you consider yourself to be a political person?

I was, years ago. And then for quite a while, I must say I was not. Really not at all. When you get your children it’s a different phase of your life. Now I’m political in the way that I go to demonstrations and I’m not in a political party, but I think that what we are doing here is political. 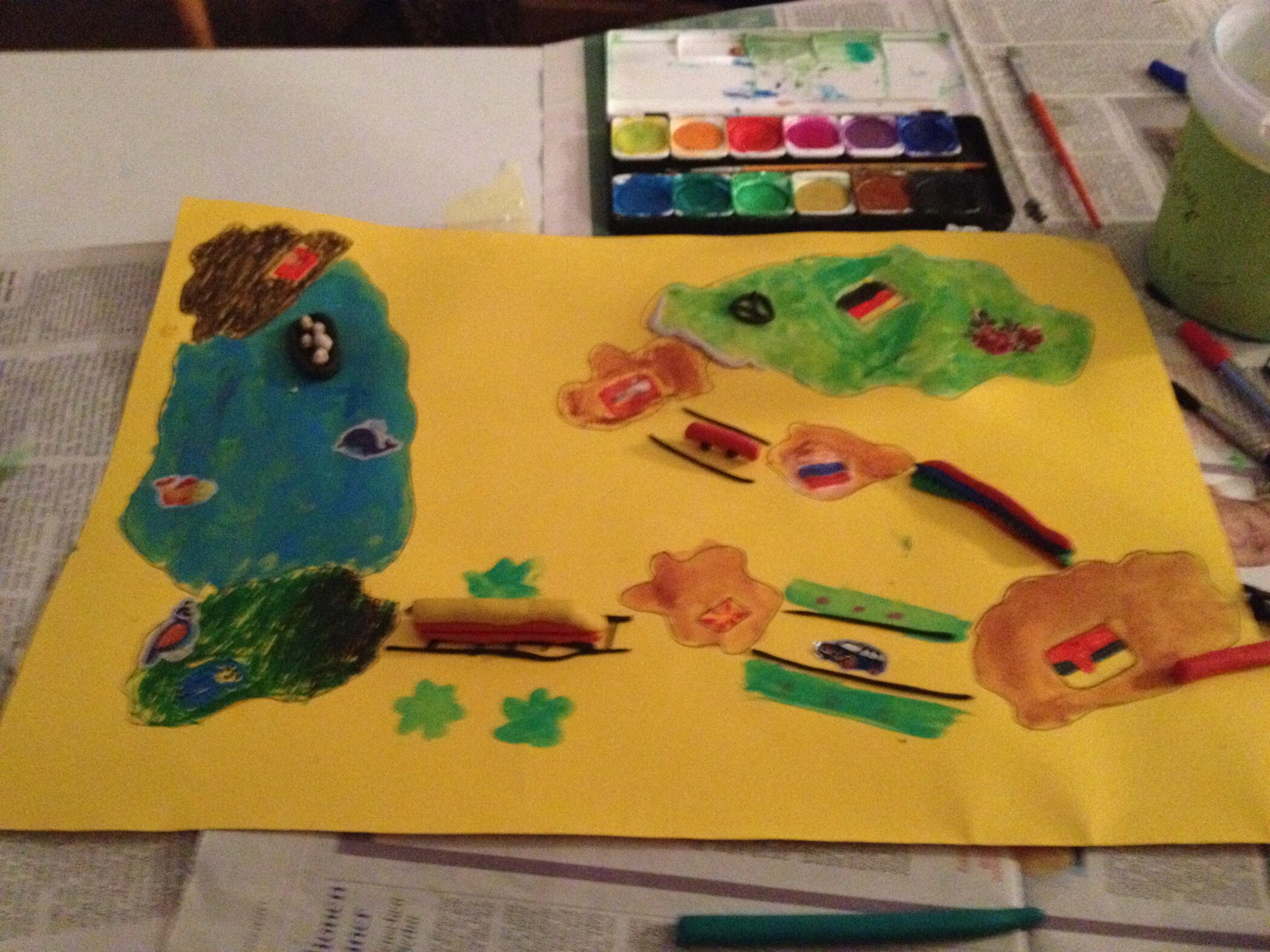 Do you feel like you’re aware of that on a day-to-day basis when you’re just coming to Open Art Shelters?

Not, in the moment, no. But if I step back and see what I’m doing, that I’m interacting with a family with children and they’re residents at the refugee shelter, okay, actually it is a political act.

But, you know, sometimes [volunteering with Open Art Shelter] is just spending nice time with the residents, it really is. And it’s very enriching – feeling that people need help and I have time, so I just do it. If I were from Syria or Iraq and in their situation, I would be so glad that someone takes a whole day and goes to the hospital with me if I need it.

It’s just a human thing really, more than a political one. I think on the whole it is a political activity, if you understand what I mean. But in the daily activities and meeting people and all that, it’s a human thing. Just being human with other humans.

You’ve been in Germany for a long time now. What does your connection with France look like for you now?

Well I’ve still got family in France, my sister is there, her children live there, and cousins, so family relationships. You never forget where you come from. So I’m very French in some ways, and now I’ve been living here in Germany for more time than in France, but I am still French. There’s some difference between France and Germany, and the mentality is different, the kind of humour is different, and it sometimes leads to misunderstandings, like with my husband! Even now, after so many years. I’m still interested in what’s happening in France, like in French politics, and the election we just had, of course. 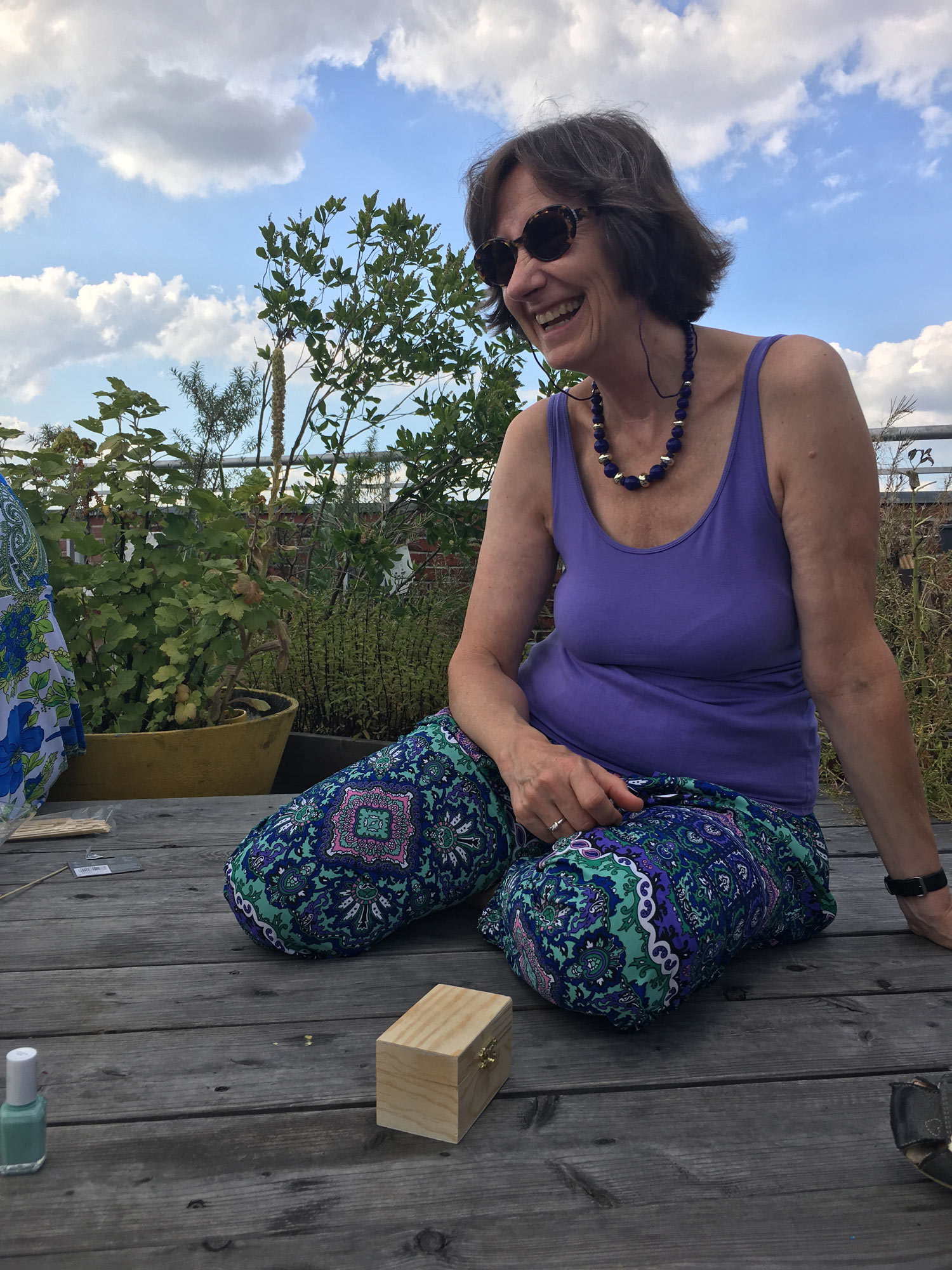 Do you think of yourself as a migrant?

No. But I did some years ago. I mean it’s been a long time, but I remember I found it very difficult, 40 years ago. I had to decide if I listened to radio, to the news in the morning, do I listen to the French one or the German one? I can’t read all the papers all the time, so do I read the French one or the German one? A lot of things like this. I don’t know why, but now it’s not a problem anymore. Okay maybe the years helped: it’s been a long time, I’m married to a German and most of my friends are German, so maybe that’s one of the reasons.

My family still laugh at me and say, “oh you foreigner, oh you’re the German one,” but I just laugh at it. It’s not a problem anymore, but it was. Quite a few years ago it really was a kind of identity crisis. I didn’t know anymore, “what am I, where am I?”

Is that something that connects you to the more recent newcomers to Germany?

Actually, they’re not that far yet. They will have the problem in two or three years’ time if they stay. Right now it’s really about survival. It’s about finding a place, finding an apartment, learning the language. So I don’t really think they have the problem at present. But I think they will find these problems later.

There’s also a difference in whether you are from the EU, or from other countries, especially Arab countries. I remember I was deeply shocked at the time when I started here, some 40 years ago, I had to go to the Ausländerbehörde (immigration office) and get a state permit and the rest of it. For me, it was very easy because I was French. But black people or dark skinned people were treated in a way that appalled me.

So the question: do I feel like a migrant? I’m not really treated like a migrant because I am from France. So it’s different. I think we will never be able to really understand or really feel what they feel, because we are being treated differently.

After a couple years being involved with Open Art Shelter, what are the most valuable things you’ve learned?

Well first of all about the people, those who I meet, it’s amazing how resilient they are. I admire them deeply. It’s amazing, I think if I’d gone through even half of what they’ve gone through, I would be completely destroyed. And you know, a lot of them suffer depression, or get sick, which is understandable. But they still fight, they are still looking for a flat, they are still learning the language and they’re doing ok. I really don’t know how they can manage it. 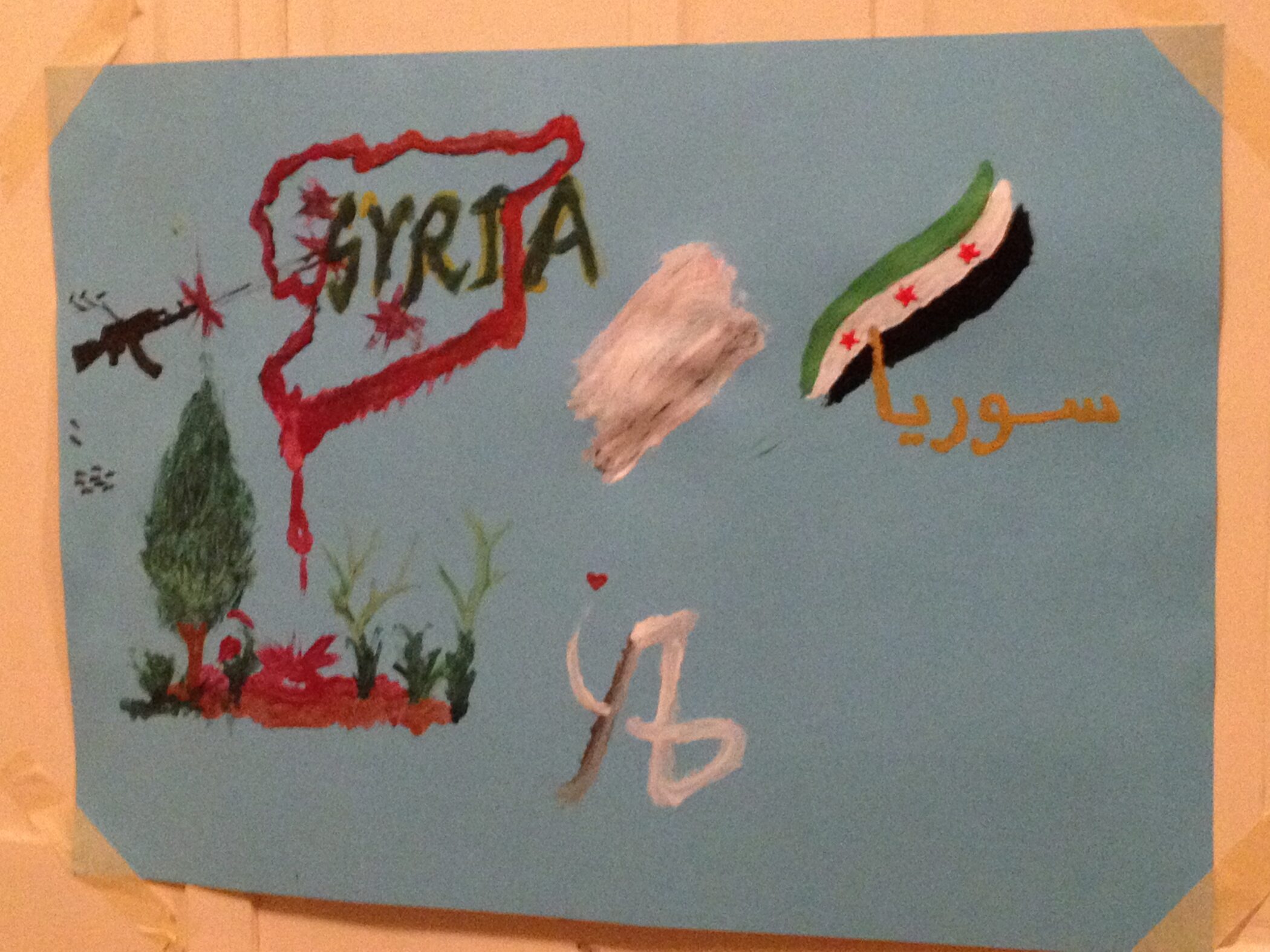 It’s very interesting to see, especially with children, in a psychological sense, how they translate [their experience], or express it. One of the very first times I came to Open Art Shelter, there were three or four boys sitting together at a table, painting – they also had clay and a huge piece of paper. They painted, or represented, their trip from [their homes] to Germany. So you had the sea they painted in blue. And then they made a little boat with little people in it. Then they drew the railway line because part of the trip was a train. And then there was a bus, so they painted a bus. Then with a smart phone they looked for the flag of each country they had been through and on the painting they put the flag of Greece, Turkey and it was fascinating. And in this way they were working at it.

When we go [to Tempelhof] on Wednesday evenings and dance, it’s fascinating for me. I’ve always known that suffering and joy are very close to one another, but I really can see it on Wednesdays. People who were crying maybe one hour before, or are very depressed, all of a sudden we put on music and they start dancing and it’s fascinating!

And then on a more personal level, I’m surprised by myself, [my ability] to cope, to adjust to changing situations with these people, with the team. It’s been on the whole a very positive experience for me. And I’ve met a lot of nice people.

So you intend to keep volunteering?

Of course, yes, of course. I don’t know how it will go on with Tempelhof, now they are going to close the Hangar, or at least that the people who are still there will move to the containers, or – I hope for them – into flats. I don’t know how we go on, but we go on.

Madeline McKay is GSBTB’s summer intern. Coming all the way from Philadelphia, USA, she is currently studying Women & Gender Studies and Art at Bates College. Photography by Madeline, drawings by the kids.