“Integration isn’t only a one-way street”

Eli Waël Khleifawi is our very own project coordinator at GSBTB who is originally from Damascus, Syria and arrived to Germany in 2015. In this interview he talks to Abeera Atif about his interests in business, his home city and how it compares to Berlin and discusses the complexities surrounding the current integration and welcoming processes for newcomers. 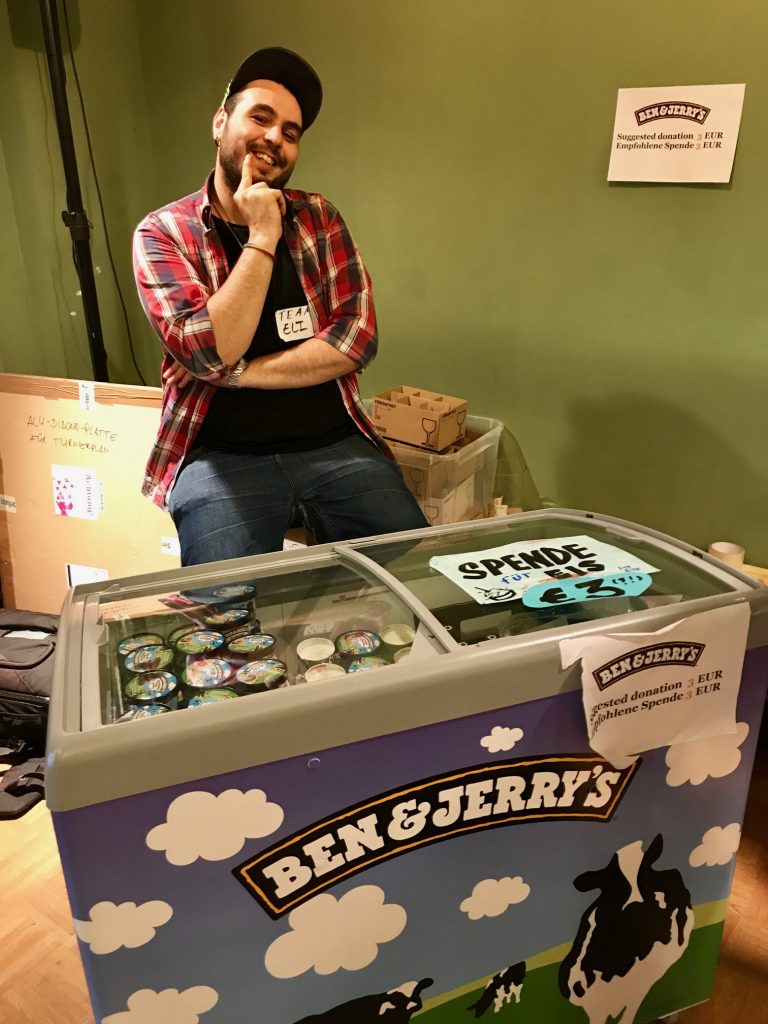 What brought you to Germany?

After I lived for two years in Istanbul, I couldn’t get a work permit so I decided to leave and come to Germany. This was mostly because I have a degree in business and I’m interested in economics, so I’d rather be in a country with a strong economy where I could find a job in these fields. Germany obviously has advantages and disadvantages – some say it’s too much of an individualistic society, for example – but for me, I like the concept of being your own person and having to do everything on your own. This was one of the things that attracted me towards Germany, other than the economy, stability and the possibilities for a better future.

What’s your connection to GSBTB?

I heard about it first in 2016 through the projects they’ve been doing, especially the Sprachcafé. A friend of mine was friends with Max Hoßfeld and he told me they needed someone to join the team. I applied  because I like most of the projects that are run by GSBTB, I like how they deal with newcomers and I think they are very successful at integrating people into German society without explicitly calling it “integration”. Currently, I work as a project coordinator so my job revolves around coordinating projects and making sure they run smoothly. I also facilitate communication between the GSBTB team and our volunteers.

I came to Berlin because it’s a very multicultural city. I like that aspect of the city – especially the fact that you can meet people from literally everywhere. I met people from Chile, Australia, New Zealand, America, Canada, Africa, Asia – everywhere. I find that quite nice because my family background is very mixed as well, so I feel more comfortable in an international atmosphere. I also love how easy it is to go around the city; it’s quite an achievement, to be honest. You never really need a car. I really like the fact that Berlin is old and new at the same time – you can see the differences between the east and the west and that really portrays the history of the city well. It’s an interesting place, definitely one-of-a-kind – I can say for sure that there is no other city like Berlin.

But that doesn’t mean it’s all sunshine and rainbows here; I dislike the fact that there are so many extreme right-wing people in Berlin, because it creates a lot of problems that could be easily avoided if they weren’t allowed to organise marches, for example. They create a bad atmosphere for immigrants and people who are coming here to make a life for themselves. So this is definitely an aspect I’m not a fan of – yes, there are always right-wing people everywhere, but they do have the freedom to say whatever they want to say.

On a lighter note, every expat knows how complicated German bureaucracy tends to be. You need paper copies of everything, which I guess, since we’re living in such technologically advanced times, seems a bit outdated for a first world country. They do love their papers (“Blattform bitte!“).

How does it compare to your home city of Damascus?

Well Damascus is an ancient city which is still inhabited – it’s the oldest capital city in the world. I like it because of its layout, because of the ancient buildings that date back to 9000 or 10,000 B.C.

People are super friendly in Damascus, so I definitely feel a difference when it comes to the warmth of the people here in Berlin. In Berlin no one wastes time talking to you or strikes up a conversation when you’re asking for directions – it’s also a thing to not smile so much here (classic Berliner Schnauze – it’s “cool” to be unfriendly). While in Damascus, it’s the opposite – people go out of their way to accommodate you, and they would do anything they could if you ask for help. It gets annoying sometimes when they try too hard, but it’s one of the things I really miss Damascus for. I think us foreigners really feel the Berliner Schnauze when we come here. 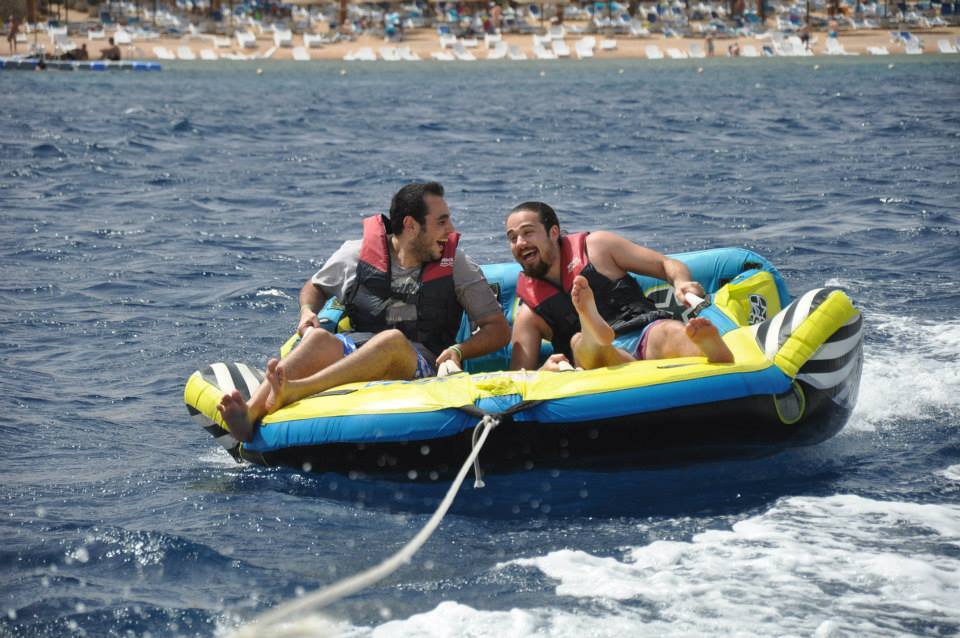 Before rubber boats became a symbol of strife and associated with the dangerous journey refugees made over the seas, they were still what you used to have good time on when you were travelling in the summer. Waël in Egypt in 2013. Source: Private.

The discussion in Germany around “welcoming newcomers” and “integration” has been quite heated during the last couple of years. In your experience, what could be done differently in both those aspects?

I think there should be organisations who actually take care of the welcoming process because currently, it’s non-existent. When I came to Germany, I had absolutely no sign of any “welcoming”. Frankly, I didn’t even hear the phrase “Welcome to Germany” until 6 months later, when I met a very nice German lady who was helping us with our bureaucratic problems.

Regarding integration, I don’t think it works well if it’s only a one-way street. Right now it’s all about telling people what to do – telling them to learn the language, know the political system inside out, assimilate into German society – even though it’s very different. What they teach you in Bavaria is different to what they teach you in Berlin, which is obviously confusing for newcomers. The focus is all on the fact that newcomers must integrate into German society, while the German society as a whole doesn’t make efforts to understand these people – to the point where German people feel confused or scared when they see Arabic letters, even though it’s a script, just like Chinese or Korean. If they don’t understand those, why should Arabic letters be a problem? I don’t think it’s just the responsibility of the state to “integrate” newcomers – it should be the responsibility of the citizens as well.

Whoever is involved in creating the framework for integration must sit down and meet the people they’re making these policies for. Listen to them, see what’s different, see what you can agree on or whether there’s a mutual ground and start from there, rather than telling them what’s okay and what isn’t. Again, it’s cultures coming together and when it’s about that, you cannot just say that your way is right and theirs is wrong. It’s not about changing their culture, it’s about accepting their culture and them accepting yours – and they will adjust accordingly.

This process can’t be calculated or reduced to numbers, because it doesn’t account for the differences within newcomers themselves. For example, my family has a mixed background and raised me with Western values, so that’s all I know. But I also understand Eastern values because I grew up within that society – so I think they have real importance and hence shouldn’t be ruled out. If someone’s own culture or background isn’t respected, it demotivates them from trying to adjust to or respect other cultures. I feel that in Germany, there is a lot of mistrust and disrespect towards newcomers, which just harms the process as a whole and which can be very dangerous. If you’re constantly disrespected by laws, by people and by people applying those laws, then your natural reaction will be disillusionment. An honest effort needs to be made to address this problem, from both sides. 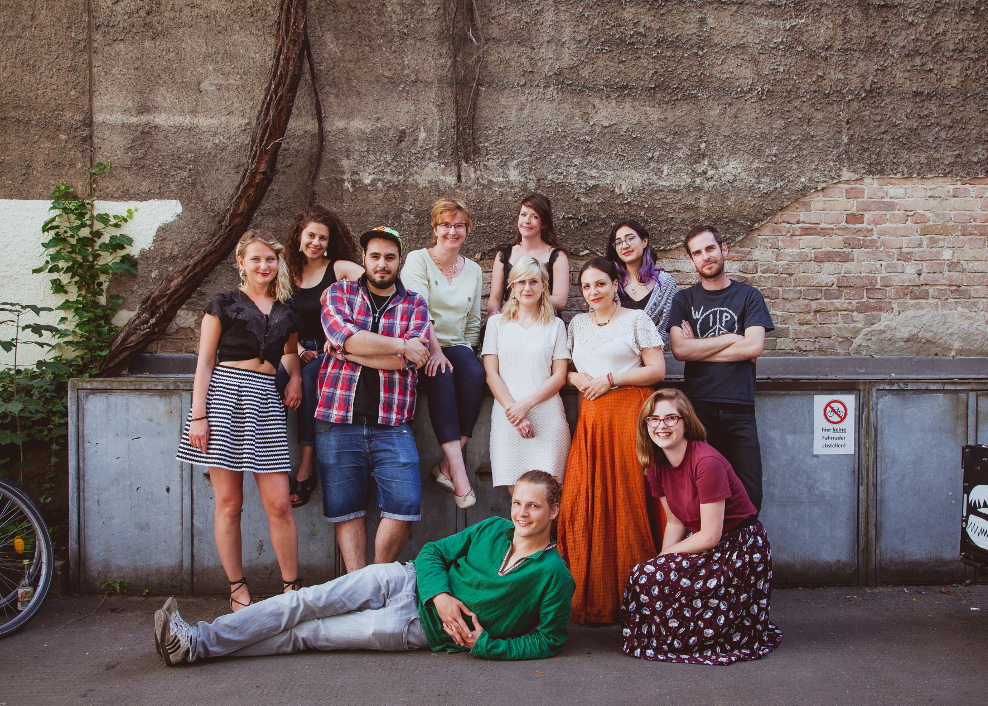 What do you hope to do in the future?

My passion is related to my studies. I have a business administration degree from a private university in the south of Damascus, with affiliations to European and American universities. I also have work experience in Damascus, Dubai, Egypt, Cairo and Istanbul. I’ve always wanted to go into crisis management. I really like to be prepared for things, so that’s why I studied things like organisational structuring and risk management in more detail. I hope to do my Masters degree – if I have enough time some day, I’ll do it. My dream career is to work in a multinational company or organisation – an international work environment would be great for me. I’m just hoping for the best.

Abeera Atif is the communications intern at GSBTB.