Grime, hip-hop and afrobeat artist Afrikan Boy recently teamed up with GSBTB to perform at East Side Music Days 2017. He also ran a workshop with GSBTB Open Music School.

Born Olushola Ajose, son of Nigerian parents, he was brought up and raised in South-East London. His experiences as a second-generation immigrant, as well as his interests in refugee rights, migration and borders, shape his lyrics and his sounds to account for all the peculiarities migrants face when they’re out in this world.

Abeera Atif met up with him to find out more about the inspiration behind his lyrics, his support for community-based projects and the purpose behind his music.

Tell us about your experience performing for refugees in the Calais Jungle.

I always wanted to go to a refugee camp to see what it was like, because I have this habit where I want to go see things with my own eyes. We got a phone call on a Friday, and the guy was like, “Hey, do you want to come down to the Jungle, to Calais?” See, all I’d known about that place was what the media had put out there, that it was a jungle of rapists, that these people were in the jungle and they were wild – and, of course, that they were trying to get to the UK. So, [the organisers] had called all these other artists and nobody wanted to go down to the Jungle and do a show for nothing in a refugee camp that was getting bad press at the time. Nobody knew what it was about. I had a different image of it in my mind, and I hadn’t really gone online to search anything about it.

So we accepted and the next day we were on our way to Calais. I had a friend from Germany who was in the UK at the time, who really wanted to see Calais – he offered to come there and shoot a quick little movie, because that’s what he does. The idea was simple – turn on a camera, and just film what I see. For anyone who can relate to me, they could kind of get to see Calais through my news report, as opposed to the news reports we see all the time.

I really went there to talk to people and try to understand their human stories rather than these narratives around “economic migrants” or whatever that we’re forced to listen to. I wanted to offer another side of the story – like some guys want to be actors out here, and they just want normal ordinary things, you know? And in between that, we shot the music video for Border Business.

The most important part of the trip for me was the performance. It was important because it brought the context of my music to the people who needed it. Something I had told my manager earlier was that I felt I had messages in my music, and I perform all around the world for people who don’t understand my language, don’t understand my culture and don’t understand me. They’ll enjoy a show, because I’m an entertainer – I’ll communicate with you and give you good vibes, no matter where I am, because that’s universal. But for my message to have a transformative effect on you, we need to have some kind of shared experience. So when I’m in an environment [like Calais], I’m like, “this is it, this is what I’ve been talking about”. When I’m in front of my people, even the pretext to my songs changes from ‘I’ to ‘we’, because I’m in the environment that my music talks about, live, directly giving them my message.

So, Calais was one of the most important performances for me of my career. [The atmosphere] was like – you start off the music and everyone’s cold, everyone looks a bit confused at the beginning because it was a Sudanese camp and they were all thinking, “who is this guy?”. And I have been to Sudan, so I had just a little bit of lingo, maybe two phrases or so. But with those two phrases I bred a familiar ground – so eventually they were like, “this is a brother” and they all came closer.

And then the hip-hop started – we were out in the sand with one speaker which was raggedy as hell, a USB and a mic I was using, and by the end of the night everyone just freed up. The people there were going mad, their energy was crazy – and that was so important to me, because it brought back the root purpose of my music, and what I do. 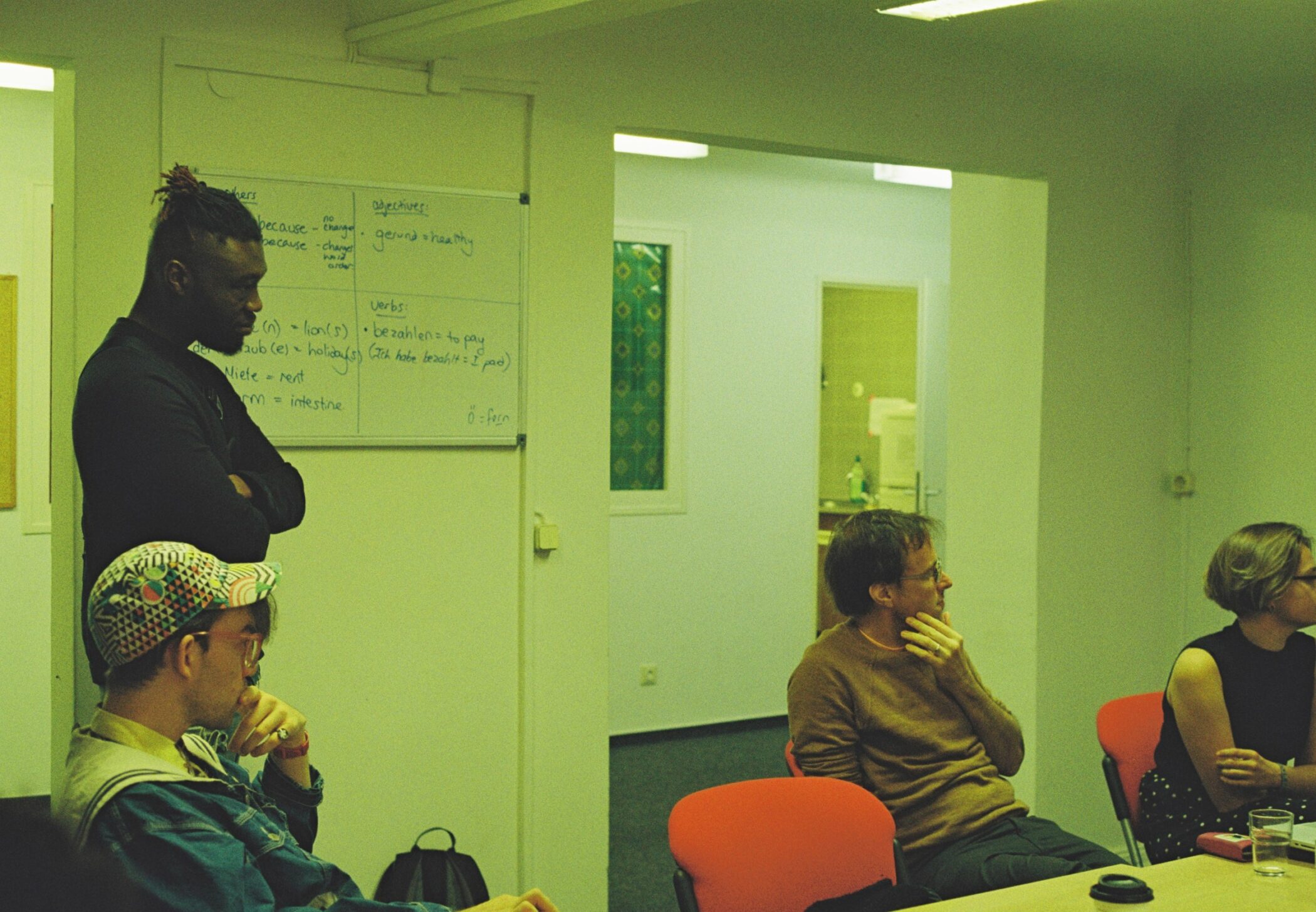 What’s your connection to GSBTB, and how did you get in touch with us?

I met one of the organizers at a gig – it stemmed from either my Lidl play [Editor’s note: Afrikan Boy’s best known song is One day I went to Lidl], something I’d said online, my previous work with refugees, or my visit to Calais – and they just got in touch with me a few months ago because they were planning East Side Music Days and some workshops. We continued the conversation and just made it happen, you know? The show was awesome, and doing the workshops, meeting [your community] and hearing all their interesting stories is invaluable. 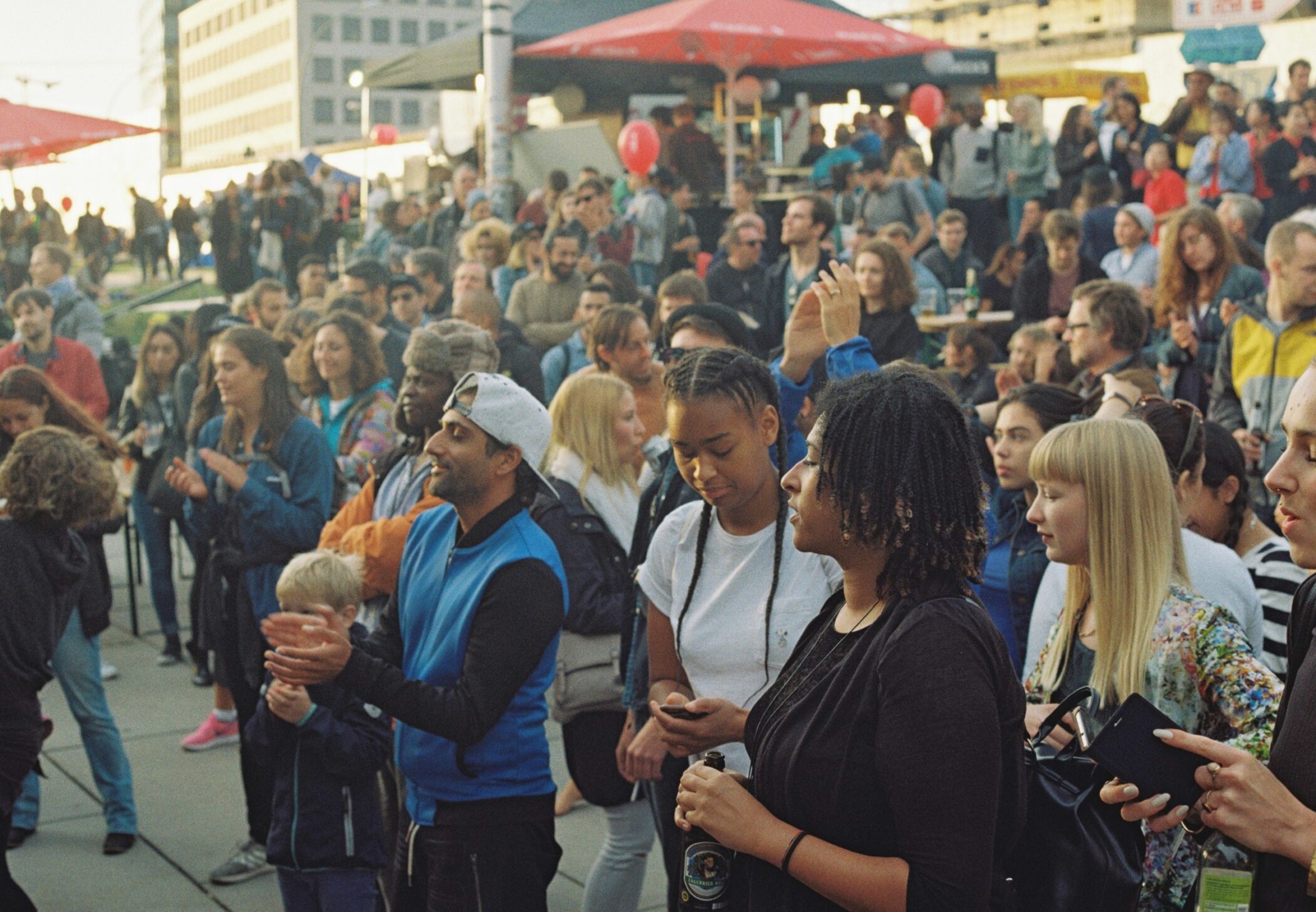 You have this lyric in one of your songs, saying “Music is my visa”. What’s the inspiration behind it?

When I started, I was on free school meals and low-income family sh*t. So to be able to go to America for the first time for free, or being able to travel the world because I make music is something I find very special and it’s a very important gift, because not many people have this opportunity, especially with their careers. But me, music is my passion and I make a living out of it – that’s the perks of the job, you know! I get to travel, learn about other communities, open my mind to the fact that all of these different things are happening on the same earth, under the same sun. It’s like, wow, people live such different lives, and their realities are so different… and that opens up my reality, because these people who live in different realities are valid in their humanity. So that’s what “music is my visa” means to me. Obviously, I need visas, but music is my passport to go to other places.

You’re a second-generation immigrant, so you must have been constantly found yourself caught in between multiple realities. Your song ‘One Day I Went to Lidl‘, in particular, is a comical take on shoplifting in supermarkets. How did these experiences translate into your music?

I just used what was around me and what was around everyone, and said things that people weren’t saying at the time. And that was the basis of my career, that, “oh everyone’s singing left, so why don’t I sing right?” It was about expressing this real reality that no one’s expressing, which gave me just a real vast range of metaphors and punchlines – as opposed to just using London references, I’d use African and Nigerian references. And people would get it and they’d find it funny.

It’s just like, “what can I can say truthfully that hasn’t been said but is still relevant?” And besides that, I do drama [and theater] and that influences me as well, so it’s like telling a story, finding an interesting way to present it and making it entertaining, because at the end of the day I’m an entertainer. Whatever I might be doing – performing, hosting a wedding, talking to people – I’m an entertainer.

Afrikan Boy after his workshop at Refugio. Source: Abeera Atif.

So, what’s next for you? Do you have any new projects or albums coming up?

Yeah, the [new] album’s in construction, it’s coming. It’s really for me about making sure that it’s heard by the right people, those that’d get it in 4D. ‘Cause I think, they’d listen to it and know it was something special. So it’s just making sure that people get to hear it – and that could take years. There’s no time limit, to be honest, ’cause I know what I’m making now will be relevant for years to come and will inform younger generations. It’s those kind of conversations that are repetitive over time. Yes, so continuing to make music, doing workshops, engaging with the youth and local communities, travelling… just being “YAM” all the way – that’s “young, ambitious and motivated”.

Hear a snippet from Afrikan Boy’s single “Wot It Do”, featured on his upcoming album:

You can find Afrikan Boy’s music on SoundCloud and Spotify, as well as on his label YAM Records. Follow him on Facebook to get updates on his new album!

Abeera Atif is a Communications Assistant at GSBTB.