A musical ‘family in exile’

Sami Salloum is a Syrian percussionist living in Berlin, who is also interning with the GSBTB Open Art Shelter. GSBTB Communications Manager Abeera Atif met up with him to discuss the beginnings of his musical journey (as well his band in Syria), his views on the Arabic cultural scene in Berlin and his new band Sham Trio.

How did you first get into music in Syria? What’s the story behind that?

I was 6 years old and we had a wedding for my aunt. My dad brought us a darbouka*, and there was a guy playing it during the wedding. It was my first time watching an instrument being played, and it fascinated me how he could manipulate the whole atmosphere, bring it up and make it more dancey. Then my father kept the darbouka for us, and I started to play on it while my brother played the riq*. We used to play on New Years’ Eve, or parties and concerts, stuff like that – but only for our family, not professionally or anything like that.

Did you learn how to play these instruments at home or did you have any professional coaching?

No, I usually just played at home by myself. But there’s some really famous rhythms in Arabic music, which fit for a lot of songs. I started with those – at the time there wasn’t as much material on the Internet as there is now, so I needed to ask people who knew [how to play] about how to do this or that and replicated it afterwards somehow. 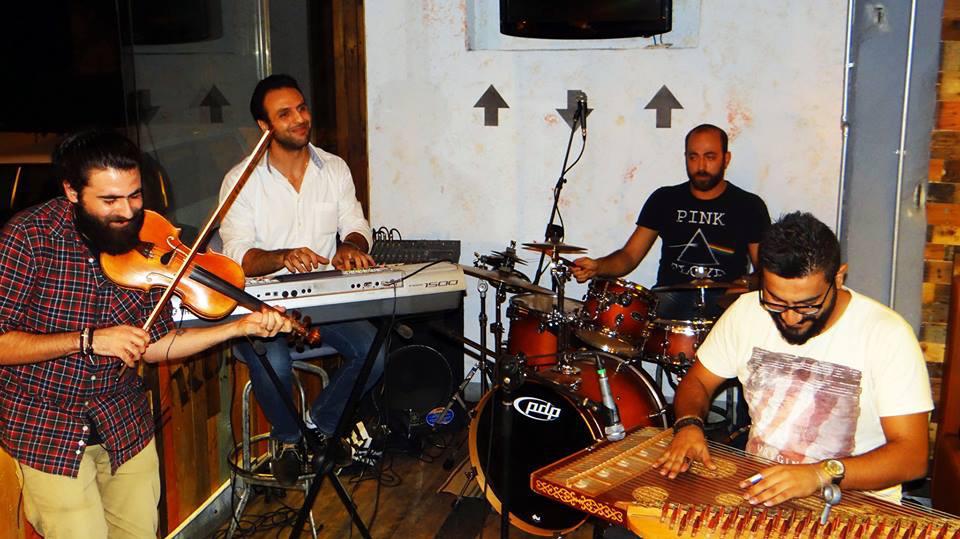 Sami playing with his old bandmates in Syria. Source: Private.

Tell me about the band you were part of in Syria. How did you form the band?

In high school I was into this alt-music and old school rock, like Pink Floyd or the Scorpions – this kind of stuff. I started turning my attention to the drums, but it was expensive at the time to buy a drum set. So my brother and my best friend bought me one – electric drums. So I started off by watching Pink Floyd concerts, playing along with them and trying to follow the rhythm with them as they played. After that, a friend of mine posted on Facebook that he needed a drummer for a new project he was doing, which was forming a band, so I wrote him because I wanted to join. It also turned out that there was a Lebanese businessman living in Damascus at the time who had lived through the war in Lebanon, and he knew what it would do to the youth. Either they would get into drugs, or they would get into guns – it’s a hard time for everybody, but it’s especially hard for the youth. So he established a cultural association called Nehna, which means “we”. It had to do with everything related to art – such as drawing, creating sculptures, writing, theatre and music. I wrote to him, and we met. I brought my drums to the meeting – and the world was basically open to us after that. 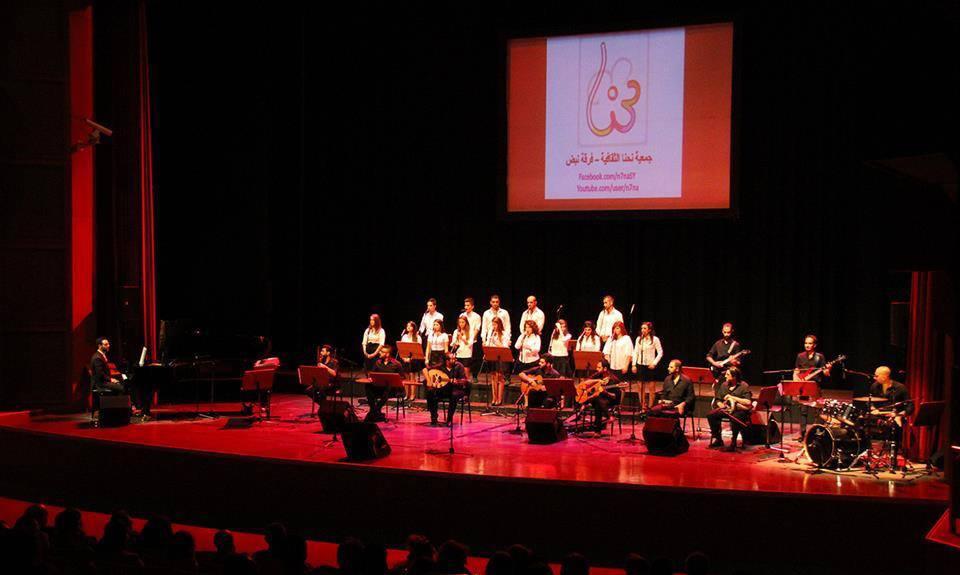 Sami performing on a stage in Syria as part of a large 30-person band. Source: Private.

What was the music culture like in Syria before the war in terms of doing these kinds of projects, and what happened to it after the war?

Of course – before the war, I would always go to the opera house in Damascus. Especially in 2008 and 2009, Damascus was the cultural capital of the Islamic world, so artists from all over the world and really famous Arab artists would come there. It was really nice at the time, but when the war started, so many musicians left the country immediately because they wanted nothing to do with the war.

In 2012 and 2013, there was basically a drop. There were no places you could hear live music  anymore – even the opera house closed due to security reasons. In a way, this actually opened up a path for new people who were coming from non-professional music backgrounds – just like my friends and I – to come and perform on professional stages, because there was such a lack of music. But somehow, even through these times, Nehna held so many workshops and classes, trying to bring up the level of the local people. You started off as an amateur, but you would become close to professional through these workshops.

Did Nehna start doing more of its work after the war, or before?

After, actually – it was established in 2013, and it allowed us to be on the biggest stages in Syria, such as the opera theater, the Al-hamra theater and so many others. We played around Syria – in Latakia and Homs – and even went to perform in Beirut later. 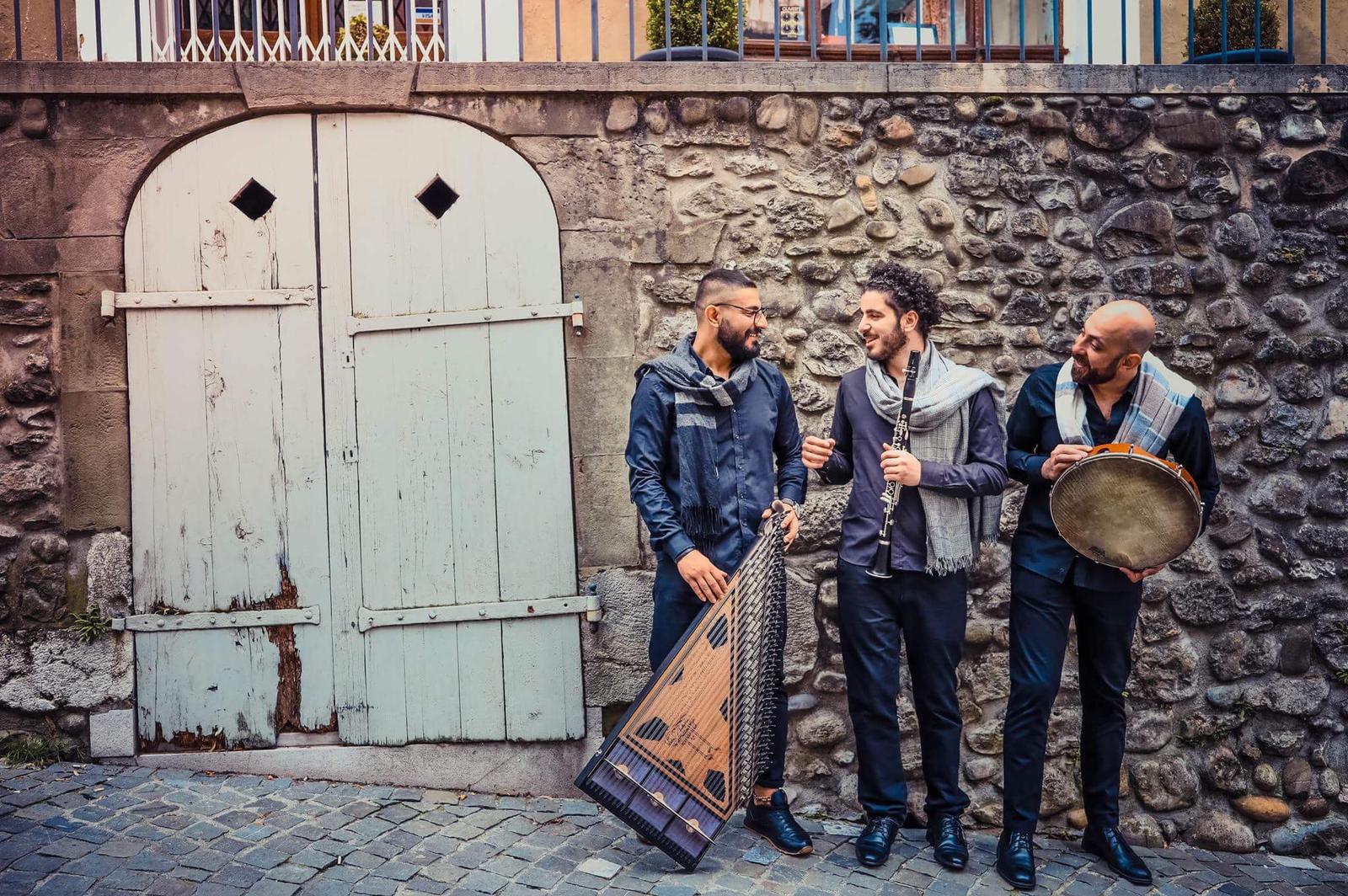 Sami and his bandmates from Sham Trio. Source: Private.

So, tell me about your new band Sham Trio. What’s the story behind it?

Initially we were part of a 30-people strong band in Syria – it was a big project at the time. Now I have two of my best friends here, who I used to play together with in Damascus. Since we’ve been together in Berlin, we formed Sham Trio, where they play qanun/kanun* and the clarinet, while I play percussion. We play some of our own compositions, some traditional Arabic music and some of the pieces we used to play in Syria. The music is mostly fusion, because it varies between so many styles and influences – we can go anywhere from flamenco to oriental to Western beats and melodies, which brings us more credibility on the stage, because it is more interesting for people to hear this ‘mix’ than one kind of beat or note. 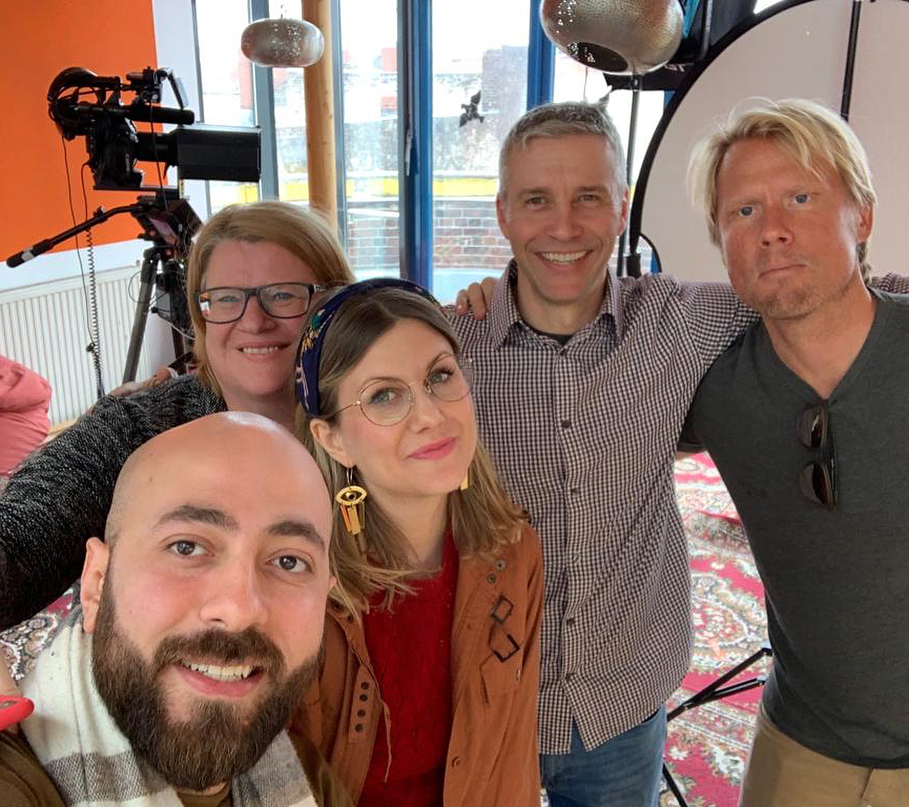 Sami being interviewed along with GSBTB founder Annamaria. Source: Private.

Who are some of your inspirations for your music?

When I started off, I was fascinated by Nick Mason, the drummer from Pink Floyd. After that, when I was playing with this band in Syria, we were in contact with very talented musicians on a daily basis and we constantly exchanged knowledge and music between us. I was introduced to many good musicians from the region – for example, from Turkey, Syria and Egypt. I was really captured by Ziad Rahbani, the famous Lebanese composer. We believe he even brought his mother from the old, traditional music into the music the new generation listens to. He’s really good, and one of the people I really look up to.

How has the Berlin music scene been for you? How is it different (or similar) to the one in Syria?

First, it’s really nice that the people here are quite open towards new music and that it’s so interesting for them. In Arabic music, there’s these quarter notes between the notes themselves, so some people may perceive it as being out of scale and be disturbed by it. But Berlin is a main hub for music in Europe – also for oriental music. There are so many Arabic musicians living in Berlin at the moment. Of course, I like the idea of jam sessions very much, because you get to meet new musicians and see who fits your style, or think of what new instruments you can add. Berlin has really been adopting these talented musicians somehow, and it’s good to have these people in the city itself. Whenever there are musicians who visit from other cities in Europe, they always say that they should be here, because this is the place to be.

In terms of the audience, it’s very surprising to me – we had a concert at Nachbarschaftsheim in Schoneberg, where the hall fit around 150 people. More than 200 people showed up, and the organisers were also flustered because they had never had such a situation before. So it was cool, because the audience were very warm and lovely and they loved the music. And that’s the most important thing, that you deliver the message and emotion through your music.

How has living in Berlin for you personally? What are the good parts and the bad parts?

Actually, I love Berlin. Whenever we travel, I always have this feeling of wanting to go home – back to Berlin. It’s an amazing city, super big and you can easily adapt the way you are – whatever ideas you have, or what you want to do or be, you can find it here. The lovely thing about this city is the variety of backgrounds, thoughts and ideas that people have. You can easily find interesting people in the U-Bahn, tram or S-Bahn. What I don’t like is the bureaucracy and waiting a long time for official papers. It takes a long time to get a single paper that you might need to proceed with your studies or something – you need to wait maybe 3 or 4 months, which doesn’t seem logical for living in Germany.

How do you find the Arabic cultural scene in Berlin? We’ve talked a bit about music culture here, but what are some other areas where Arabic culture is really taking the city by storm?

The Arabic cultural scene is really huge, which I believe is good to show different perspectives to people who might already have some kind of prejudices about Arabs. You can taste Arabic culture through the food, drink, music and the art it gives you. Or at least you have the opportunity to meet people from Arabic countries and get to know them to see that they are really similar to Westerners. They might speak another language, but at the end they are enriching the whole mix of people you have here. You have so many musicians and restaurants here – Arabic food has even begun to really come up and rival other cuisines.

There is a lack of places, however, where you can find cultural exchanges between poets and writers – there was a cafe that used to provide this opportunity, and there will be another one opening soon. But there’s only one. And I don’t mean a cafe in terms of a place where you can just go eat and then leave, but a space where you can sit down and hear some story-telling or poetry. But hopefully because there’s a huge number of Arabs in the city, something like this will be created in the next few years.

What are your plans for the future? Do you have any new projects that you will start either musically or personally?

Musically, I’m really satisfied with Sham Trio, since they are my best friends before they are musicians I share the stage with. We have kind of built up this relationship where we can easily jam on the stage without even agreeing on what to play beforehand. We are together on a daily basis, we spend whole days together – so we’re kind of a ‘family in exile’, so to say. So this has been really great and I think we have a bright future which we are walking towards (but slowly). Personally, I would love to study public relations and media. I think having native Arabic speakers will be very needed in this domain in the future, because there are so many Arabs who want to start their own business and would need support with the press and communications. Having learned three languages, that would put me in a better position to be able to do this kind of work – of course, I want to learn Spanish as well first!