A one-on-one with GSBTB’s Project Manager

Friedemann Bumblies is GSBTB’s Office and Project Manager and resident German, who hails from Thuringia (a state located in East Germany). In this interview, he talks to Abeera Atif about his life in East Germany and then in Berlin, tackling stereotypes and the future of cooperation between East and West Germany.

Berlin has always fascinated me since I was a little boy. I have an uncle and cousins here in Berlin, so that meant that I visited Berlin with family several times – and it was an absolute highlight, always! I often came here with my brother and my friends when I was a teenager. There are so many aspects that I positively associate with Berlin – quite banal things like the pithy smell of the subway. I studied in Bavaria, in the small Franconian town of Erlangen, and at the end of my studies I was commuting to Berlin almost every weekend. What I like about Berlin is the “Screw it!” attitude it displays. On the one hand I like the feeling of anonymity one has in this city – on the other hand, I’ve never had such a good relationship with my neighbours and with the people in the neighbourhood as I’ve had here. This contrast between cool personal encounters and feeling part of the neighbourhood and absolute anonymity is what totally excites me. 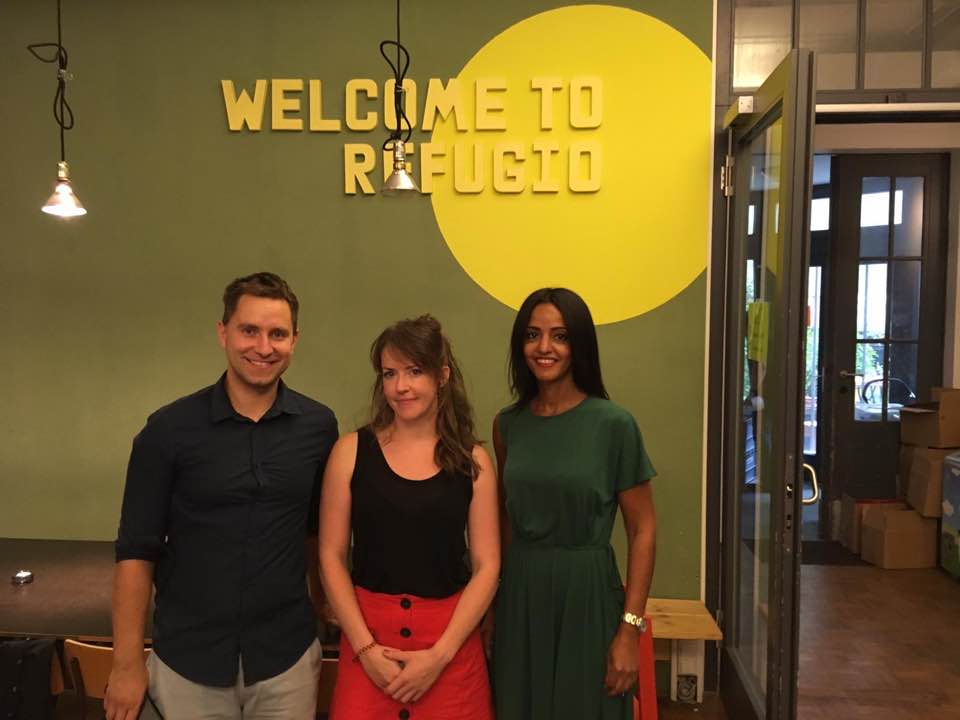 How do you compare it to where you came from?

I grew up in Gera, a town located in East Thuringia. It’s very difficult to compare – I have to say, I am perhaps a bit biased. I like my hometown – and I like being there regularly. It’s a great change from city life. Talking more on this point, through Give Something Back To Berlin I learned that you first have to have a positive attitude towards the city and decide that you like the city. Then in most cases you voluntarily decide to go to Berlin and give something back to it. But my own experience in Gera is different. For economic reasons and lack of perspective, many people have left Gera – an absolute brain drain, if you will. It was clear to me as a teenager that I would leave this city after finishing school, and this naturally also influenced my attitude towards social engagement, having commitments, fostering longer ties and so on.

East Germany has a stereotype attached to it, where it is typically considered more racist than the rest of Germany. How does this hold up in your experience, and where do we go from here to defeat these kinds of stereotypes?

The question provokes me a little. I would rather ask how existing structures can be better supported in their (sometimes lonely) fight against the right. Additionally, such a stereotype is constantly repeated – and perhaps rightly so. The thing is, I’m not the right person to judge because I’ve never been exposed to racist hostility in Berlin, Bavaria or Gera. Having said that, even from primary school I noticed that such a thing exists – for example, a good friend who was frightened by growing hostility had to eventually go back home.

Perhaps a short anecdote – I recently attended an event held by the Heinrich Böll Foundation. It was about how to react to right-wing populist speech and how counter-strategies could be developed. There was one person sitting in the audience who said that they never had contact with “right-wing, open-minded” people and had no experience of how to talk to them. It really shocked me that there are people who sit here in Berlin and say, “Hey, I don’t know any Nazis, I have no idea about them”. What was shocking is that these are people sitting in the Heinrich Böll Foundation, who then discuss counter-measures for right-wing populism. But these people are not affected in the sense of experiencing direct racist hostility, nor have they ever talked to these populists on a personal level. But perhaps this is an isolated case.

I’m strongly in favour of explicitly supporting associations and people from East Germany who have been committed to these causes for a while, and involving them concretely in any discussions about these topics – because at the end of the day, they are better equipped to develop any sort of counter-strategies against growing populism and hostility. That would be my wish – to actively involve the forces that already exist (and which have also been strengthened by years of debating these very things) in the process. 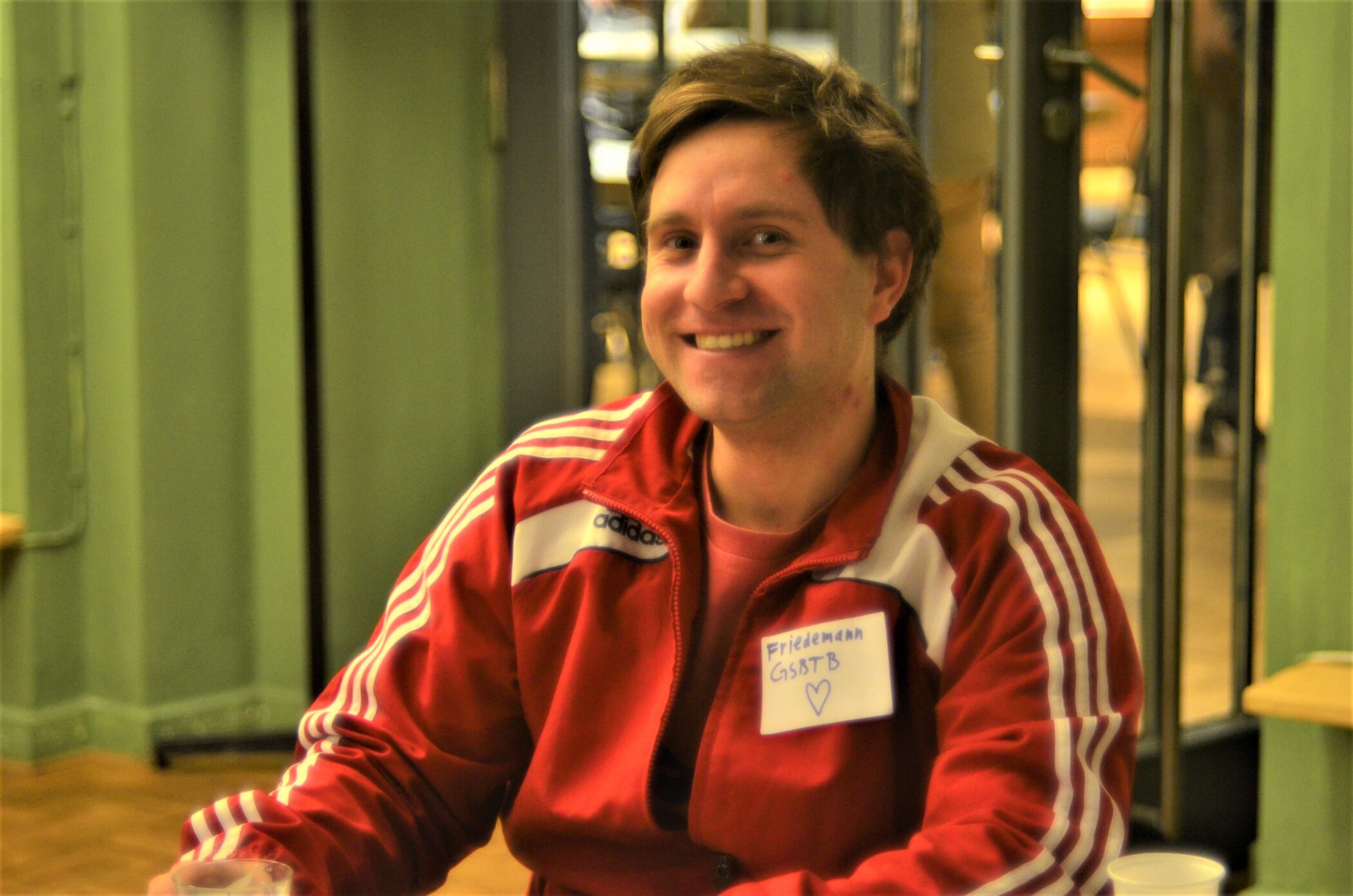 Friedemann sitting at the welcome desk at one of GSBTB’s Team Ups. Source: Private.

What is your connection to GSBTB?

I first came across GSBTB on Facebook in 2015, when I had first moved to Berlin. Since 2015, I had been working in three different Malteser shelters, so the kind of work GSBTB was doing seemed to be a logical “next step”, building on the work I had previously done. I followed GSBTB’s work on Facebook and realised that I wanted to help people arriving in Berlin and make them feel comfortable and settled. That’s why I applied to work for GSBTB. And I’m really happy to see so many people here at GSBTB who I met while working for the Malteser shelters. My main motivation in this association is my own personal development, and also to be in contact with people I have met over a longer period of time – to see how their lives in Berlin develop, and to support them in making this city a home.