Bringing up baby (in the office)

An often overlooked problem in today’s society is the pressure on women to not only bear the brunt of parenthood, but also balance their work aspirations. Constantly having to balance your duties as a mother with being a ‘good, productive’ member of society often carries with it a host of mental and emotional baggage. So we asked ourselves – what is it like being a mother in a world that constantly demands productivity? Read an article by GSBTB Open Kitchen Manager Ricarda Bochat, where she discusses the challenges of being a working mother, and the gaps in labour market and social service provisions that make this balance harder to achieve. 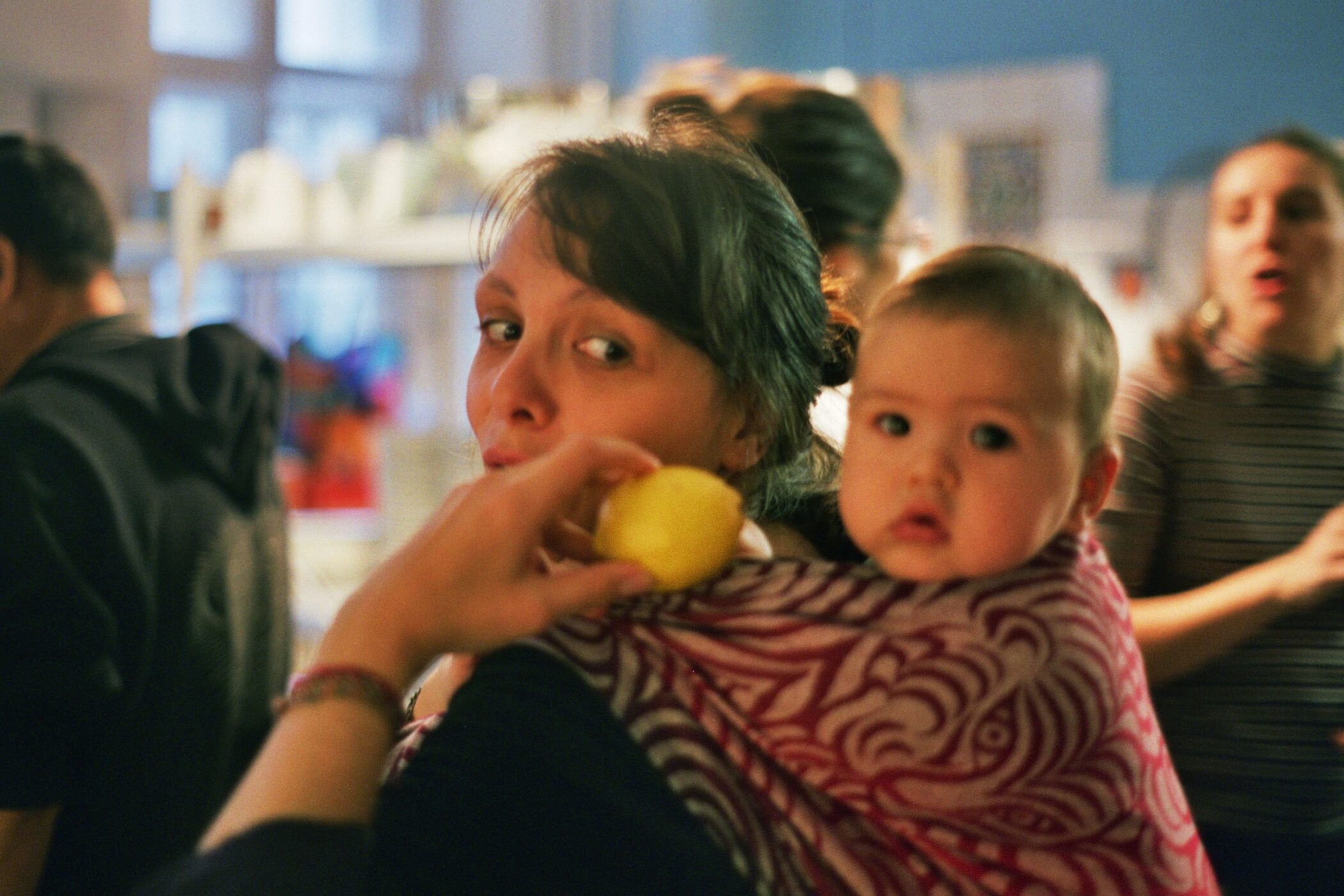 In the kitchen together. Source: Private.

Our first ‘office baby’ turned one this year! I spent the day chasing after him (this little guy is such a mover), and repeatedly shedding tears of joy (it’s true, motherhood is an emotional roller-coaster). But I also spent a lot of time thinking about the year that passed – the ups and downs, the challenges and triumphs. The first steps, the first smile, but also the first day back at work (two weeks after he was born; I know, I know, I’m crazy).

So, what is it like working after you have a child? Well, it’s many things – but it’s not easy. Before he was born I used to make big proclamations about how I would put the child on my back and be back in the kitchen in no time (much to the amusement of all the people who have children). I do that now, and it’s great. But I had no idea just how much work is involved until doing that is possible, and just how lucky I am to have a child that will let me do it. Questions about little details (that can impact a lot) constantly run through my mind: Did he nap? Did he eat? Will I have to breastfeed him on the U8 on the way to work? Did we leave two minutes too late and now he’s in tears, and probably won’t sleep again until 11pm at night? 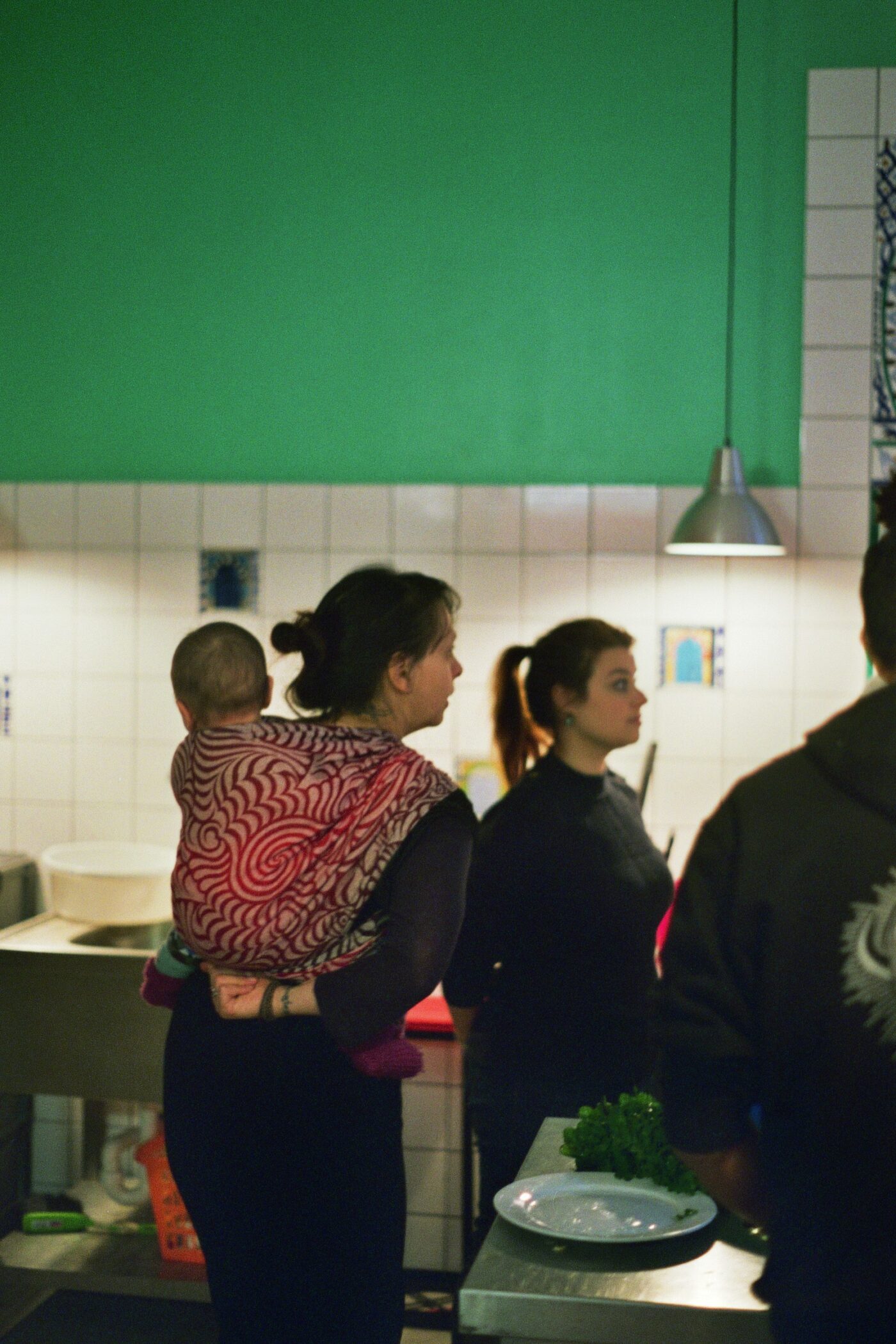 It’s very much a life in two parts. There’s the work part – the part with making all the meetings, constantly being up to date with emails, adhering to deadlines and getting feedback. There’s a kitchen to take care of, food that must be cooked, events that have to be organised, and the community I do this all for. And then there’s the mum part. The sleepless nights, the sticky hugs, the endless loads of washing and the profound love for a tiny human that’s growing into his own person. It’s relentless, exhausting and the most rewarding experience ever.

Somehow you have to do all of that – ideally at the same time – with only 24 hours in a day. Is that even possible? Other moms can probably attest to the constant intrusive thoughts that run through our heads during the course of a day: What was I thinking? How do other people do this? Do we get any help? Where are the dads in all of this?

Simply put, motherhood isn’t a joke. There are those days, when none of it seems possible. Even before this life-changing event, there were days when things started going wrong the second you put your feet on the ground in the morning. Your bike tire was flat, you’ve missed an important email, you’ve gotten a bill that you didn’t budget for – commonplace things that are enough to ruin a day. Those days aren’t  fun, and we try our best to get through them with our heads held high. 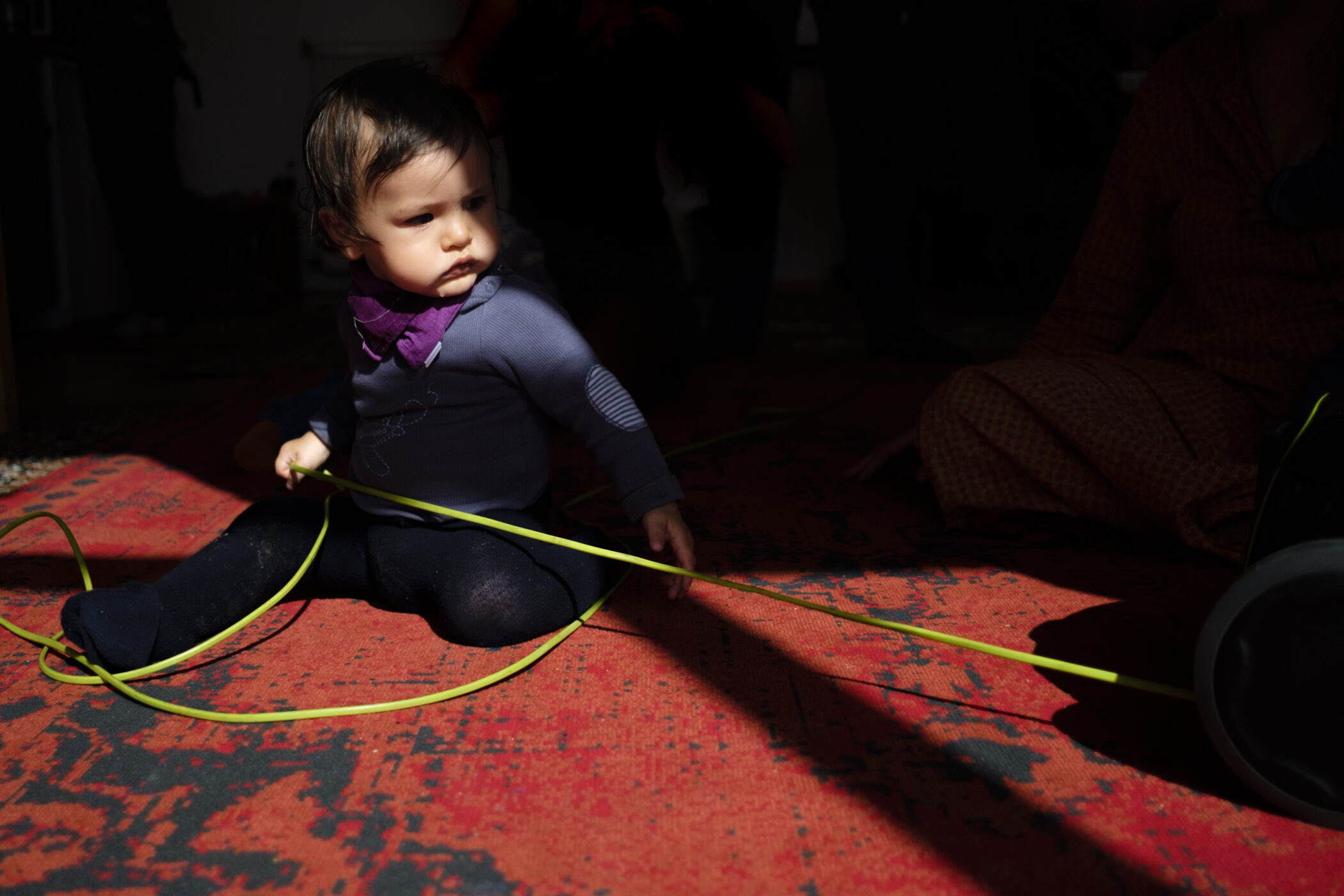 But add a small, unpredictable person with their own needs and problems into the mix. Days like that are incredibly difficult to get through, because at that point, you feel like every little thing that goes wrong matters so much.

It’s not just me who feels like this; according to an article on Motherly that has been making the rounds online recently, 51% of mothers feel like they can’t properly handle the stress of motherhood and work. For a third of mothers, this stress reaches a point that their physical or mental health is suffers as a result. A third. Think about that – that’s a lot! But it’s easy to see why this is the case. Work is demanding. Depending on the kind of work you do, you might have to leave everything behind when you get there. That can be difficult – if not impossible – if you’ve had a night of no sleep, for example. But even if you have a job that allows you to bring your family with you, or even the baby at times, the lack of sleep gets to you. Having double the amount of responsibility but a finite amount of time to deal with it (never mind the fact that you don’t get double the pay to make up for it) is very tiring. 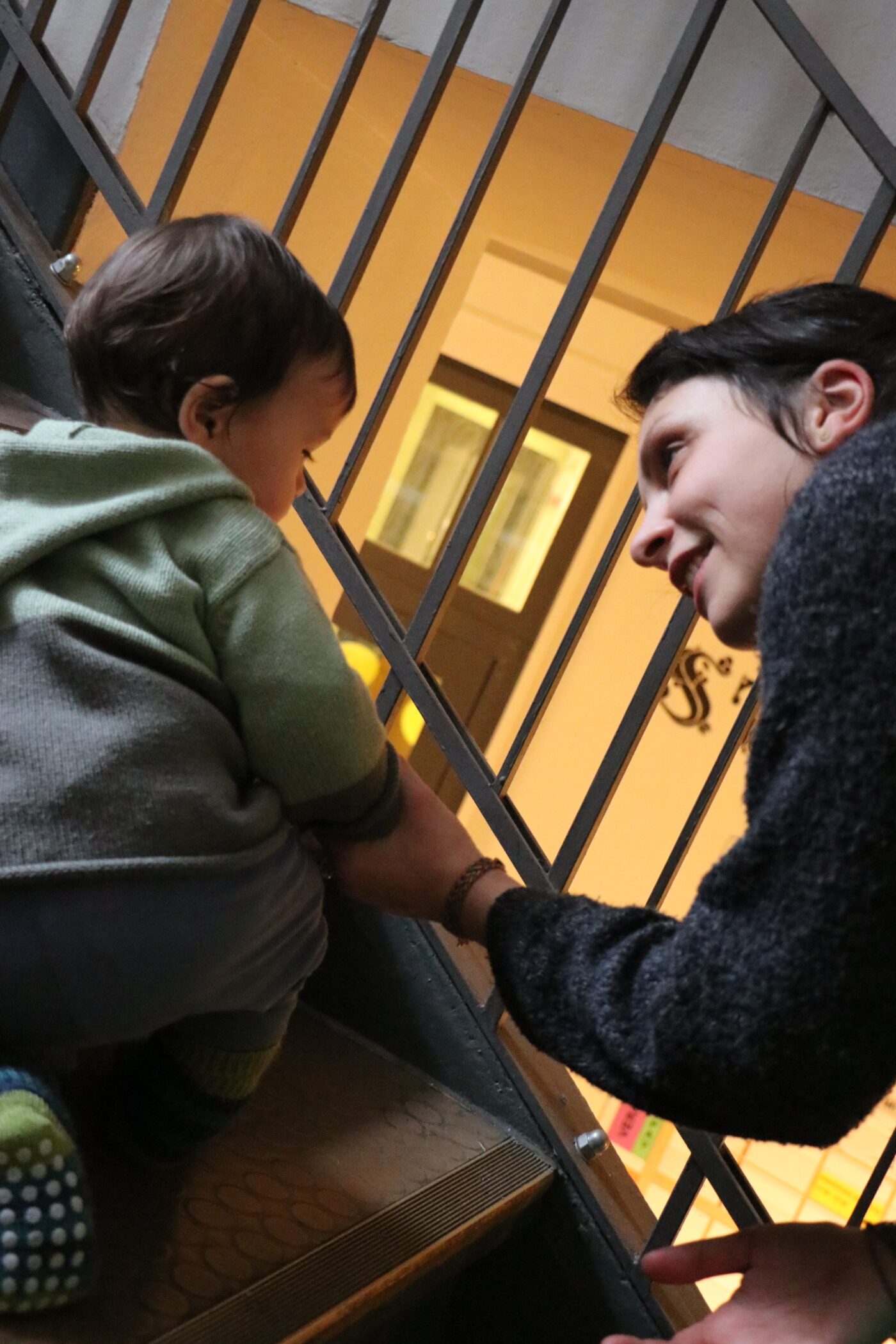 Other factors also play a role here. Depending on your upbringing or environment, there can be a lot of pressure to get back to work as soon as possible. This can be financial, emotional or social pressure, either from yourself or the people around you. Once you are back at work, you’re expected to function – and be as productive – just as the way you were before. You get a number of sick days for your child being sick. But what I found in this first year alone is, that no matter how hard I try, if baby gets sick, I get sick – and really sick at that. Add to that the emotional pressure of wanting to be successful, productive or generally well-functioning in all aspects of your life, this can amount to way too much for one person to deal with pretty quickly.

You also have to worry about childcare, which has become nightmare fuel for anyone who even thinks about becoming pregnant in Berlin. There are simply not enough spots at Kitas (childcare centers) or other daycare places to go round. A lot of Kitas simply don’t have the right amount of staff to deal with all the requests they get. A lot of the times, the Erzieher (childcare workers) are fresh out of training to make up for more experienced staff. Childcare workers don’t make nearly enough money which leads to fewer people choosing to go down that route, resulting in a constant cycle of shortage. 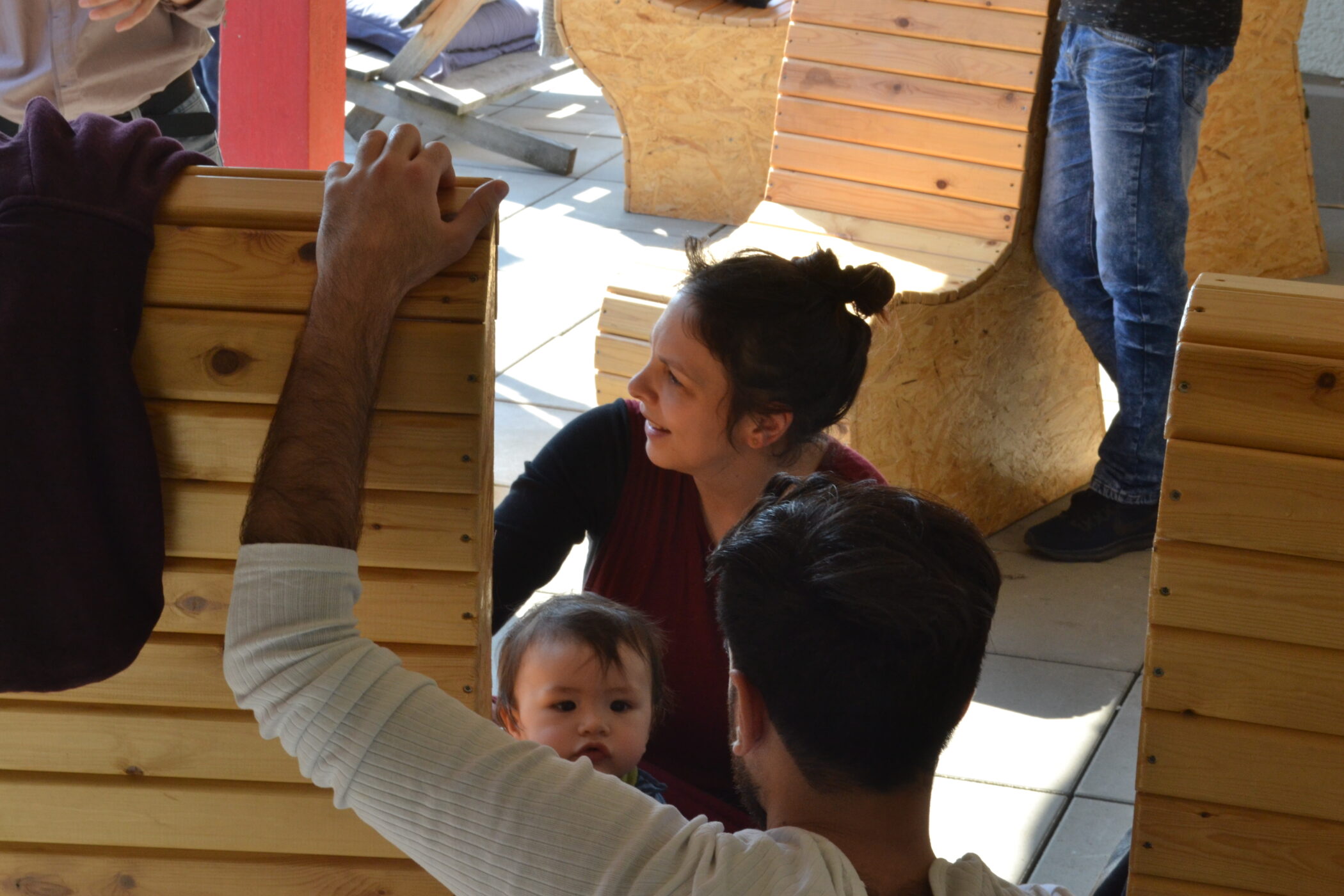 Having dinner atop the Refugio roof. Source: Friederike Ruge.

I have friends who contacted well over 60 places in total, and still ended up with nothing. Unfortunately, that’s definitely not unusual. How do you deal with this lack of support? Do you sign up everywhere the second you find out you’re pregnant? Do you just never go back to work? Do you leave Berlin?

Kathrin, a friend of mine, once said, “If you send your child to Kita early to go back to work, do you miss out on a lot?”. Most people don’t consider the emotional aspect of all of this. As a mother, you’re constantly battling the urge to not miss your child’s firsts – the first steps, the first half-word spoken, the first time they can sing the alphabet. You can’t really be the pristine and productive worker society demands you be if this guilt keeps gnawing at you in the back of your head.

Then there are those days when it just all comes together and you ride this wave of sheer joy until you fall into bed in the evening with a huge grin on your face, your heart filled with love for this tiny human sleeping next to you and a genuine sense of excitement for the next day. To be fair, those are not exactly the norm – but they do exist. 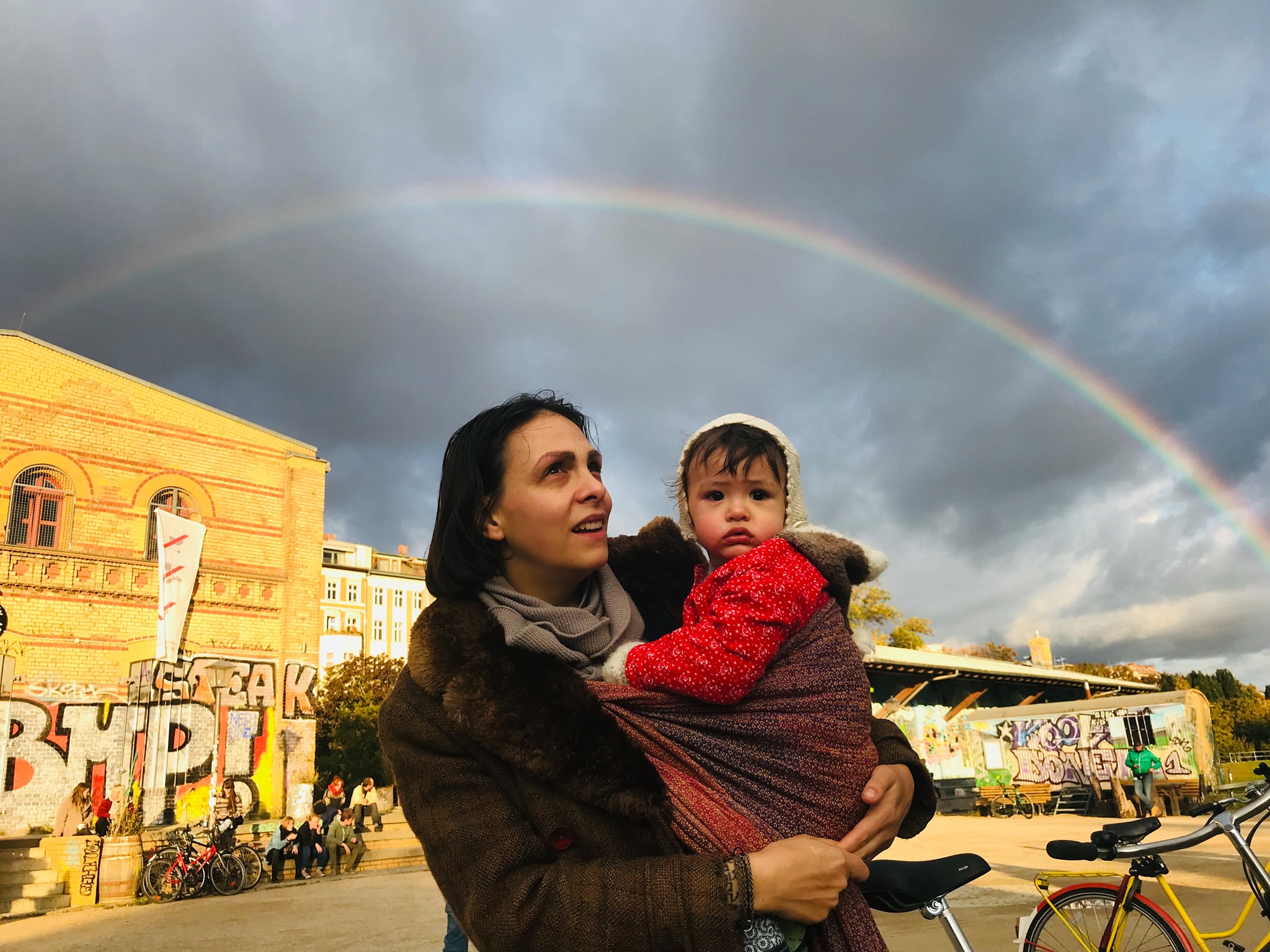 You wake up at 9.30am (9.30? What happened? Is he still breathing? Yes, he is. Okay, good!) and you actually manage to put breakfast together without everyone having to change their clothes for a second time. Success! You get some emails done while the little one is busy ‘repotting’ plants in the garden. You make it to work for a really successful day in the kitchen, the little one asleep on your back for most of it. You finally get to take him down when the food is ready, and get immediately covered in sticky hugs and kisses (but you love it). You go home, and he immediately falls asleep when you put him to bed.

Those days do indeed exist. They’re few and far in between – but they make you feel unstoppable, super-human and invincible.

The Kita crisis didn’t affect us quite as badly as it affected others. Neither my partner nor I work full-time and honestly, I just bring the baby to work most of the time. Obviously this was much easier when he was smaller and would just sleep wrapped up on my back all day. But even now, he still loves coming to the cooking events and eating Indonesian, Swedish, and Egyptian food with us. By now, he knows Refugio like the back of his hand and probably thinks it’s his living room. 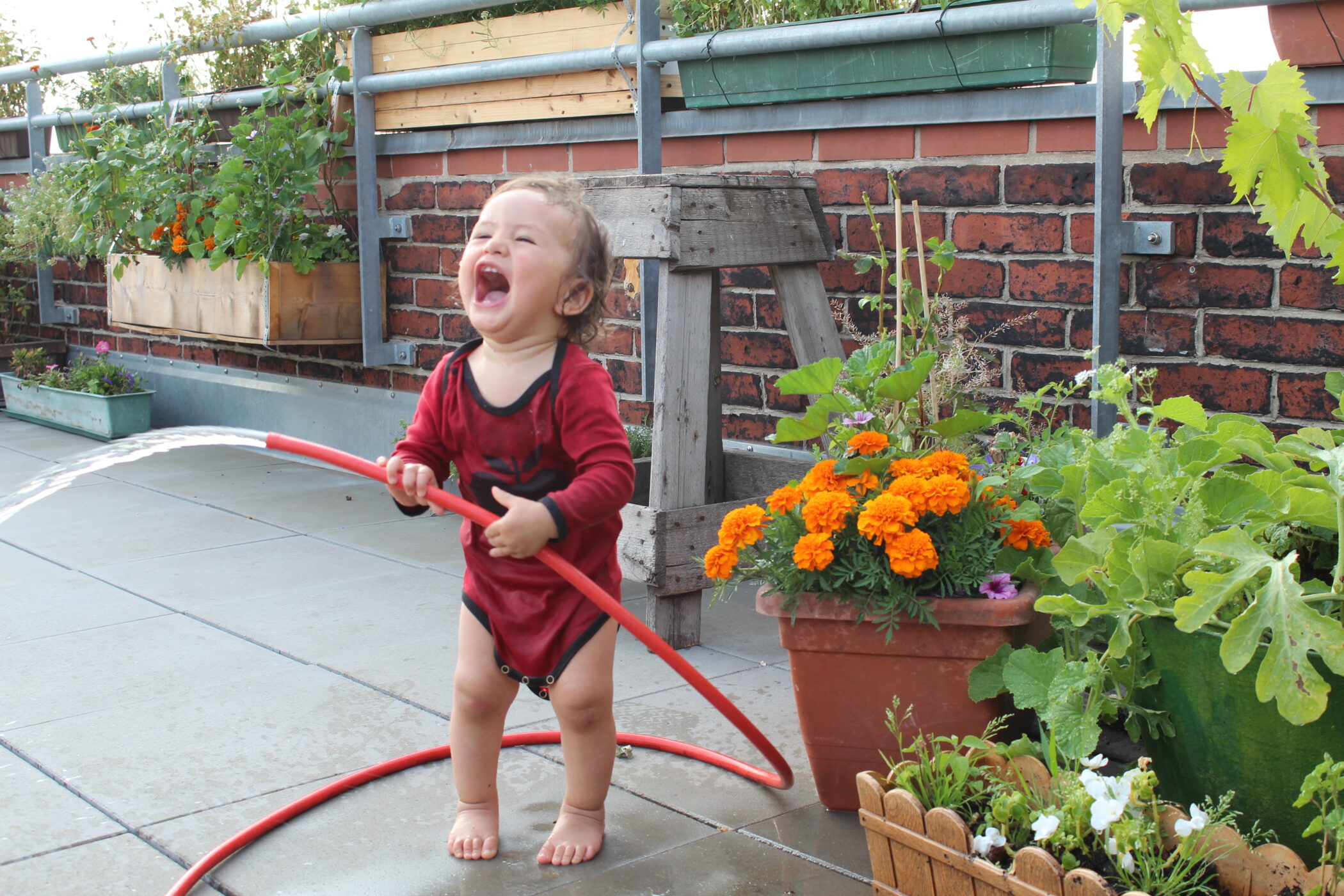 But obviously not all employers are that welcoming. Some can’t be, for obvious reasons. Others have probably never thought about is an option. This makes it even more special to see trailblazers like the prime minister of New Zealand Jacinda Ardern bringing her baby to a UN meeting, or Australian senator Larissa Waters breastfeeding her baby during a parliamentary session. If it’s possible to accommodate mothers in a such high-stake political environment,  then surely a lot of other places could follow suit.

Looking towards the future

Sharing your life with a tiny human that depends on you for pretty much everything at the beginning, and then seeing their independence gradually develop until they can go off to explore the world is an exciting, fun and hugely rewarding experience.

But we can’t really do it alone. It takes a village to raise a baby, as they say. With the absence of an actual village around us – replaced instead by a major global city with a severe lack of resources – we need to build those structures for ourselves. Exchange babysitting hours, use Facebook groups as sounding boards and fountains of wisdom (an example is the much-frequented Expat Babies Berlin) and go to (or host) clothes swap parties or get-togethers with other moms – what Berlin lacks for in its social services, it makes up for in unofficial and innovative avenues for one to have their own support system as a parent. The key thing to remember is that you should allow yourself a break every now and then, because being hard on yourself doesn’t help. It’s okay to not always be a 100 percent productive or at your best all the time – after all, you’re only human!