GSBTB Communications Manager Abeera Atif met up with some members of the GSBTB community who had been observing Ramadan this year, asking them about their experiences in light of the Covid-19 crisis and the restrictions in Berlin, what new problems came to the forefront, and how they were able to cope.

Ramadan is undoubtedly the holiest month for Muslims; adhering to the traditional Islamic aspects of community and togetherness, an entire month is spent abstaining from food and drink during the hours between sunrise and sunset. To the outward eye, this seems to be a painstakingly long exercise in physical and mental fortitude, but for Muslims, it’s simply a way to test their faith by putting themselves in the shoes of those less fortunate than them.

A particular aspect of Ramadan that always stands out is that of community. Back in Pakistan, we traditionally always ate suhoor (the ‘pre-dawn’ meal, eaten before the sun rises, signifying the beginning of the fast) as a family, or made plans with friends to eat a traditional Lahori breakfast at 4-5 am at a restaurant. The iftar/maghrib (the evening meal which Muslims use to break their fast) is always a communal affair; on normal days, I remember always skipping family dinners to watch TV instead. But during Ramadan, it was a given that the iftar had to be eaten together. We would gather around the dining table, waiting patiently (and hungrily!) for the maghrib adh’aan (evening call to prayer). As soon as the sounds of the adh’aan would echo across the streets from the local mosque, we would break our fast by eating dates. Even family members (such as my grandmother) who weren’t fasting would join us — and so, Ramadan is closely associated with being around loved ones, especially your immediate family. 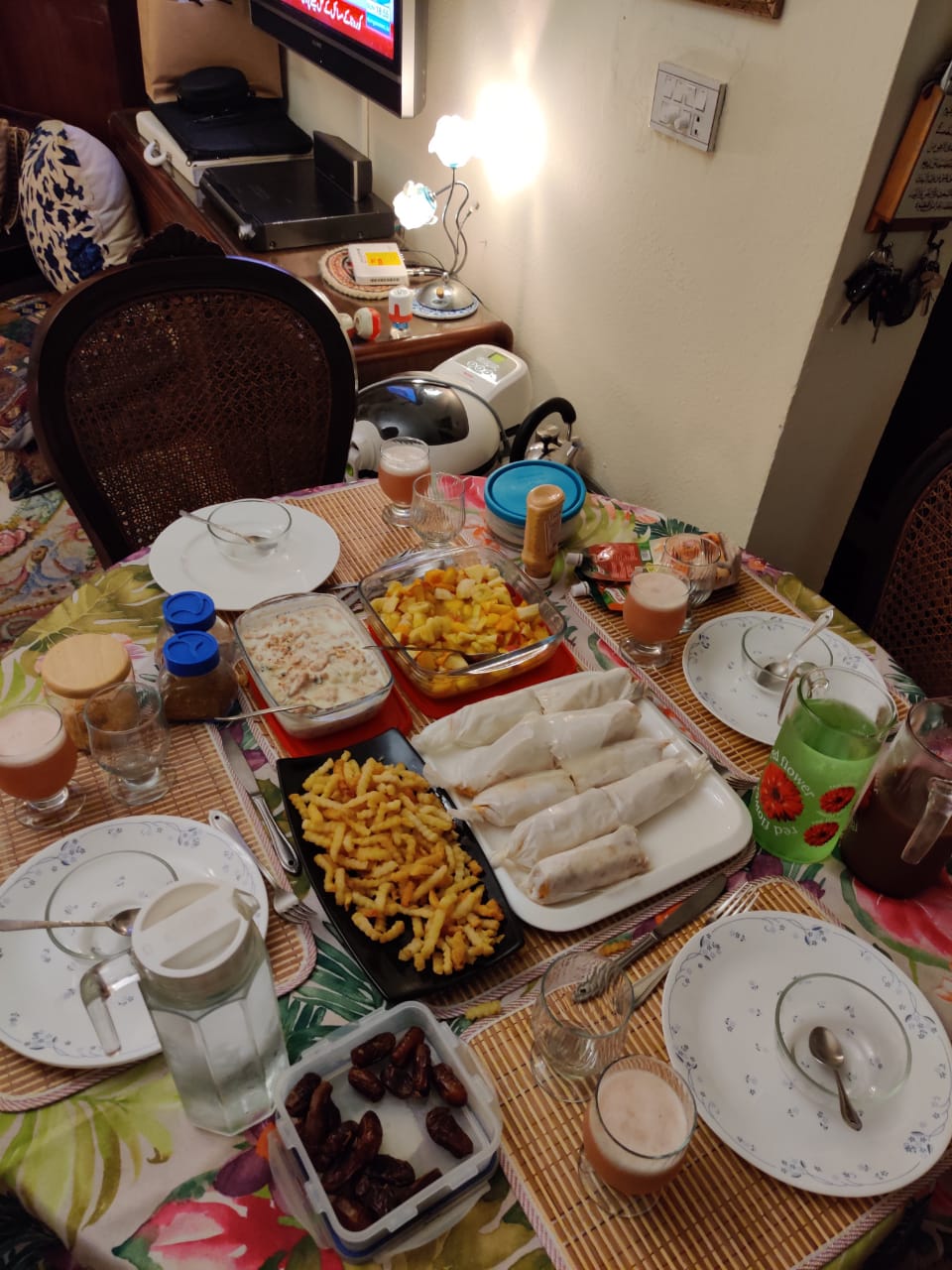 A normal home-made iftar meal from a household in Pakistan. Source: Private.

Keeping this in mind, the Covid-19 crisis has had significant implications for Ramadan. Having talked to Muslim members of the GSBTB community, some things particularly stood out; many felt that they missed their families even more, remarking on how the distance between them seemed even greater now that there wasn’t even an option to travel back home any more.

For others, that option had never existed even in “normal” times. I talked to one of our community members, Majid, who had been exiled from Syria; having been part of the resistance movement, he had fled the country and lived abroad for around 8 years. Having no possibility to go back, he mentioned that it was a norm for him to spend both Ramadan and Eid away from his family. “I got used to it, but this year was a little different. Usually I wouldn’t really care, given that I can’t even go back, but this year I felt this strange sense of sadness that wasn’t there before [the crisis].” 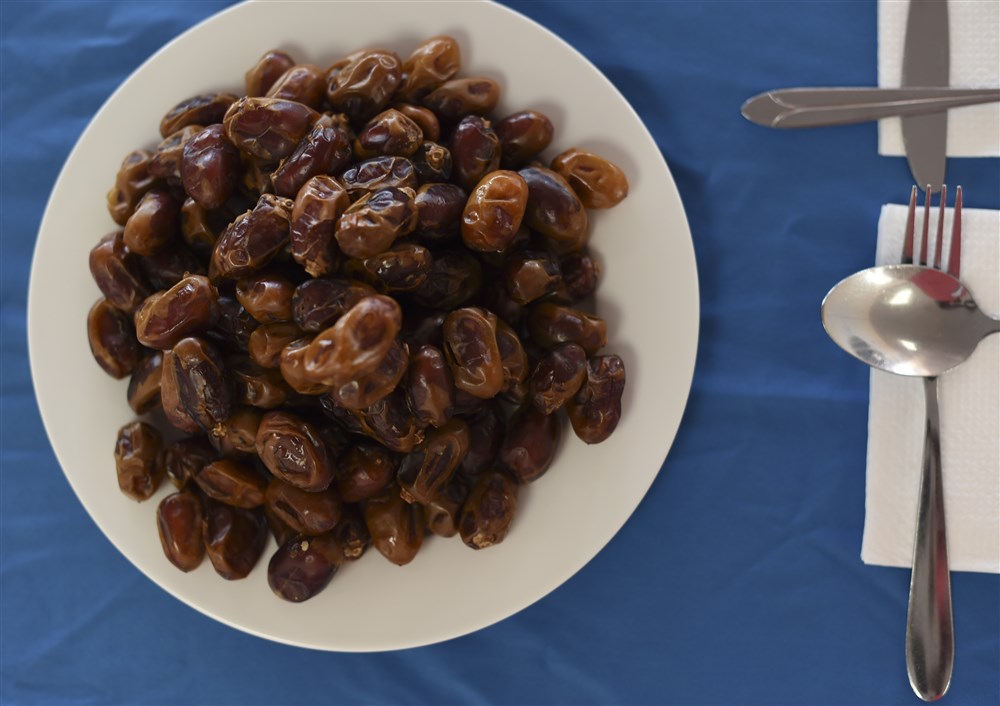 A plate of dates at an iftar meal. One of the most common ways Muslims typically break their fast is by drinking water and eating dates. Source: CTJF-HOA.

Others had a different perspective on this unique new situation. Speaking to Amjad, a resident of Refugio and long-time GSBTB community member, he brought up the point that the current circumstances actually worked in his favour. “I didn’t feel so sad, because back in my homeland there was also an enforced quarantine, and people weren’t allowed to go outside or meet each other. Last year and the year before, I felt quite sad to not be with my family. But this year, I guess the situation kind of helped in a way.”

Many also talked about how different it was to celebrate a holiday built around family and sharing once they had migrated to a Western country, and compared it to how the experience had been in their home countries. Amjad told me: “I was living with my family, so we always did Ramadan together. We would have the suhoor together, sleep for a while, and then fast through the day while living our daily lives — going to school or work, usually. We’d meet as a family again at maghrib to break the fast together. I suppose the biggest difference is that I live alone here; my parents or my girlfriend aren’t in Berlin, so I’m totally alone.”

When you do suhoor alone, and then you do iftar alone, it can really get lonely. I used to have a lot of people around me at this time, you know? And suddenly, I’m doing everything alone.

“It’s the second year I’m celebrating Ramadan [in Germany], and this year was special, because I had made up my mind to go through the entire month of fasting. I didn’t even feel strong enough to do it, because here the fasting period is much longer than in Syria [due to the sun setting later in the day]. The atmosphere doesn’t really help, because when you just go out of your flat, you see everyone eating or drinking, living life normally. All of the things you’re supposed to stop yourself from doing [while fasting], everyone else is doing them — and you’re just watching. It isn’t so problematic in the beginning, but gets harder as the month goes on. I was quite energetic in the beginning of the month, but I felt a dip in my energy during the last 5 days because the fasting time became even longer [due to the sun rising earlier]. [In Syria] You could feel it everywhere outside, because most of the population is Muslim. Even the Christians didn’t eat openly in the streets during the fasting period; all the cafes and restaurants were very empty. You can really feel the atmosphere of Ramadan everywhere in the streets.” 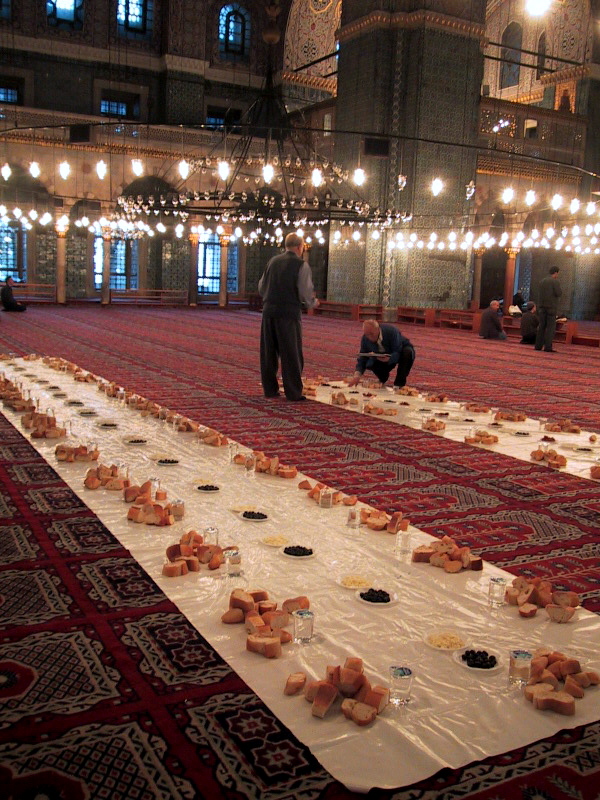 A communal iftar meal being set up at a mosque in Turkey. Source: User balavenise on Flickr.

Majid also had a similar opinion. Having lived in Turkey before, he said: “Ramadan is just very different here than how we used to celebrate it in Syria. You see more “scenes” from Ramadan there and in other places than you do in Germany. Especially the rituals you usually associate with the month — for example, it was quite obvious it was Ramadan when I was in Istanbul, because you would see all these large gatherings and people eating together at iftar time. In Berlin, you can see these scenes in some areas or streets, because of the Arabic and Turkish diaspora present in neighbourhoods like Neukolln.” Laughing, he then added, “You can see that a lot of people on Sonnenallee are taking it quite seriously.”

When I asked him if things had been especially strange this year, given the restrictions placed on gatherings as a result of Covid-19, he said: “Ramadan is about gathering with the family, talking about what happened during the week, discussing the food you cooked that day, or visiting your relatives — here, you can barely have this kind of contact anyway. And this year, everything has been very different because of Covid. Usually I would have the iftar with a couple of my friends, and we would break the fast together, but it just wasn’t possible this year, unfortunately.” 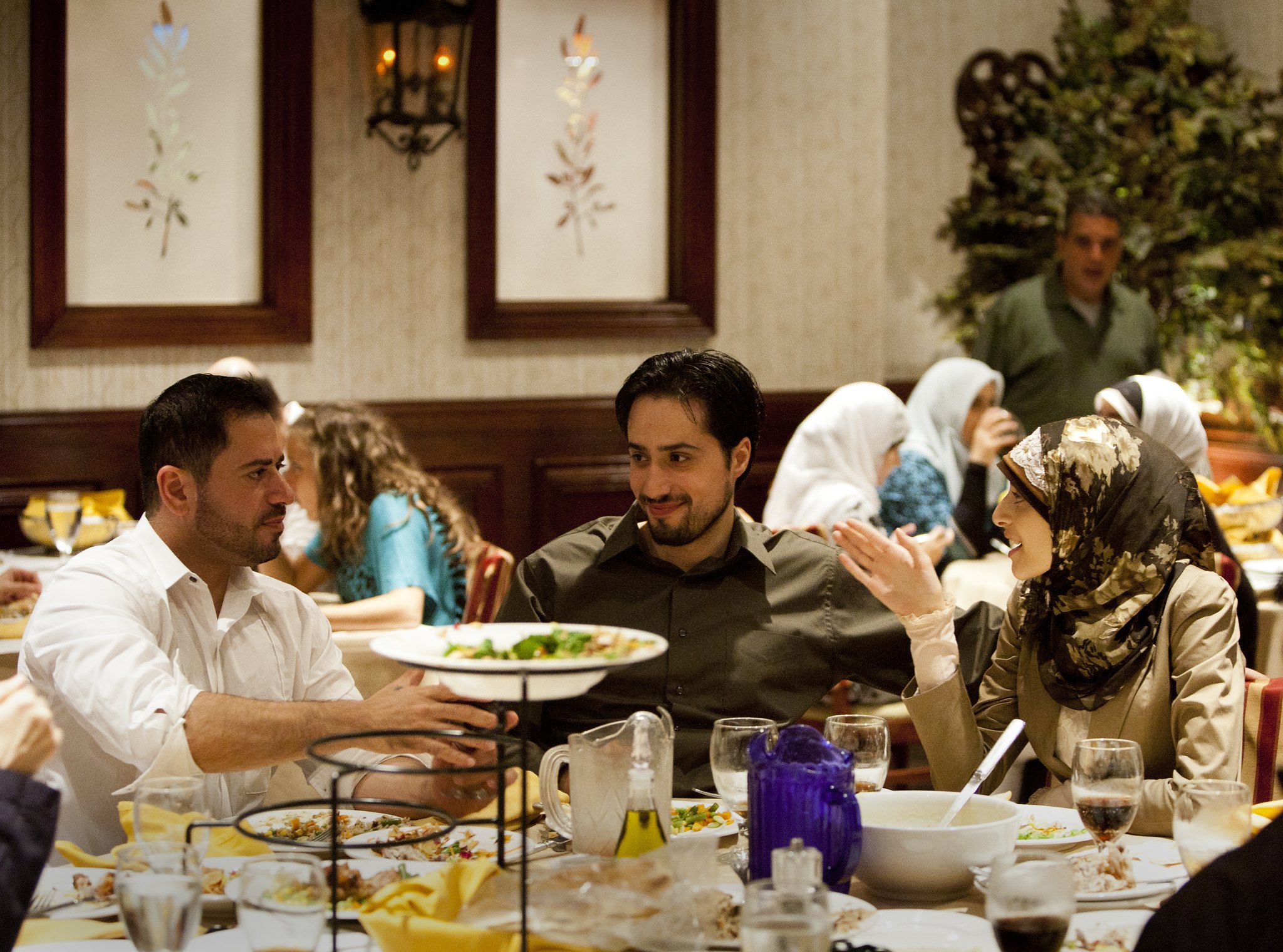 Friends having a conversation over an iftar meal. Source: user GPA Photo Archives.

Amjad, on the other hand, had an entirely different living situation — which posed new challenges.  “I live in Refugio with a lot of other people from many different cultures and countries,” he said. “Everyone has friends from many different walks of life, or has a different approach to the crisis — so you couldn’t really trust that everyone was staying safe, because you didn’t know who they were meeting outside. I mean, you trust the people who you know in the house, but you can’t trust that the friends they’re meeting are healthy.”

I trust everyone living here as a person, but I don’t trust the virus — so Covid-19 cut us off from each other.

I asked him if he ever shared an iftar meal with the other residents in the house who were also observing Ramadan, and he remarked, “Everything [at the house] is quite intricately connected, so you couldn’t pretend like everything was normal and just eat together. Sometimes I would go to my sister’s place to eat with her family, but that was pretty much it. We had made a deal that we weren’t going to see a lot of other people, and created a close circuit of 3 or 4 people, so we were at least able to meet sometimes during Ramadan.” 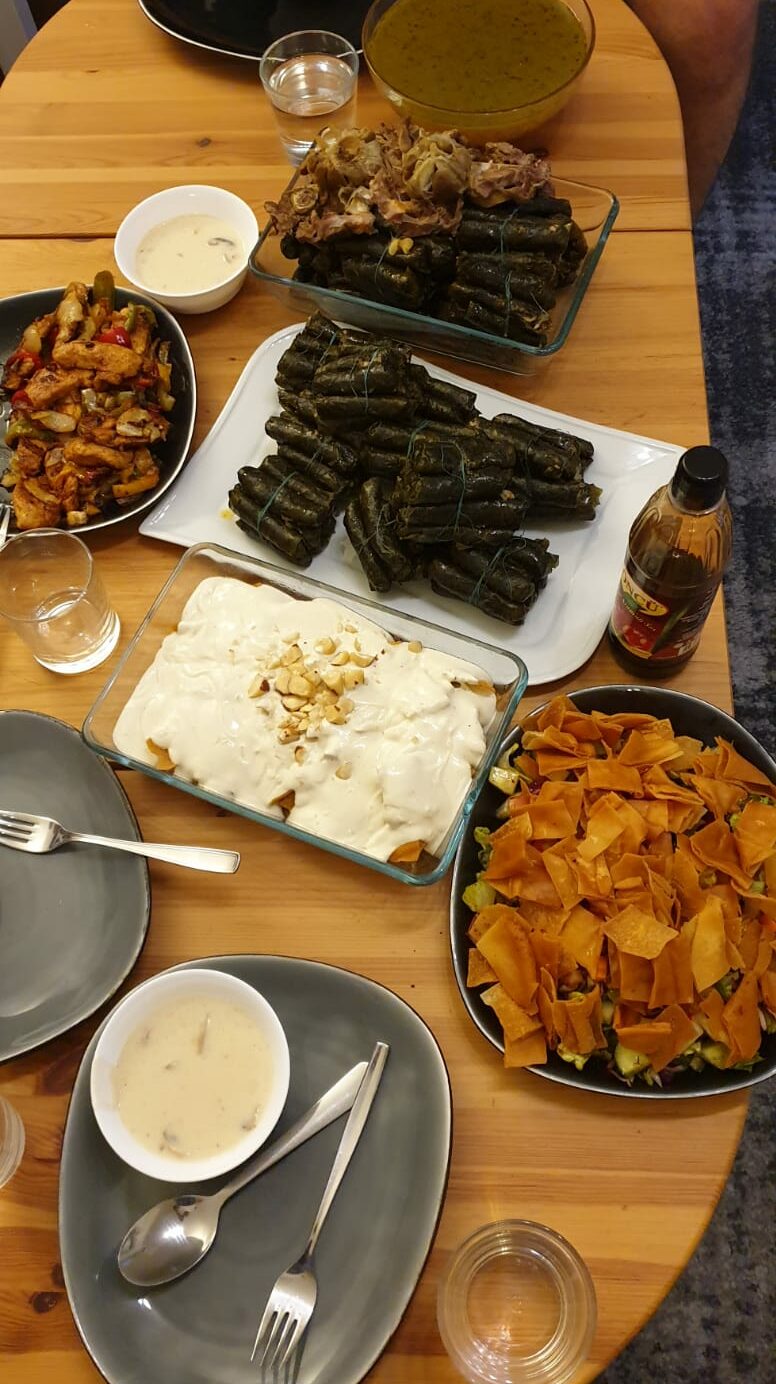 An iftar meal Amjad, his sister and family made, featuring traditional Syrian dishes such as fattoush and tabbouleh. Source: Private.

After a whole month of fasting has passed, Muslims celebrate Eid al-Fitr (“Festival of Breaking the Fast”), which marks the official end of Ramadan. Since Muslim families are traditionally large and complex, this is a time when everyone gets together; the whole day is spent meeting your immediate family, aunts, cousins, or even your more distant relatives. Sharing food is important — no Eid is complete without a beautiful spread, usually lunch and dinner at a relative’s house. 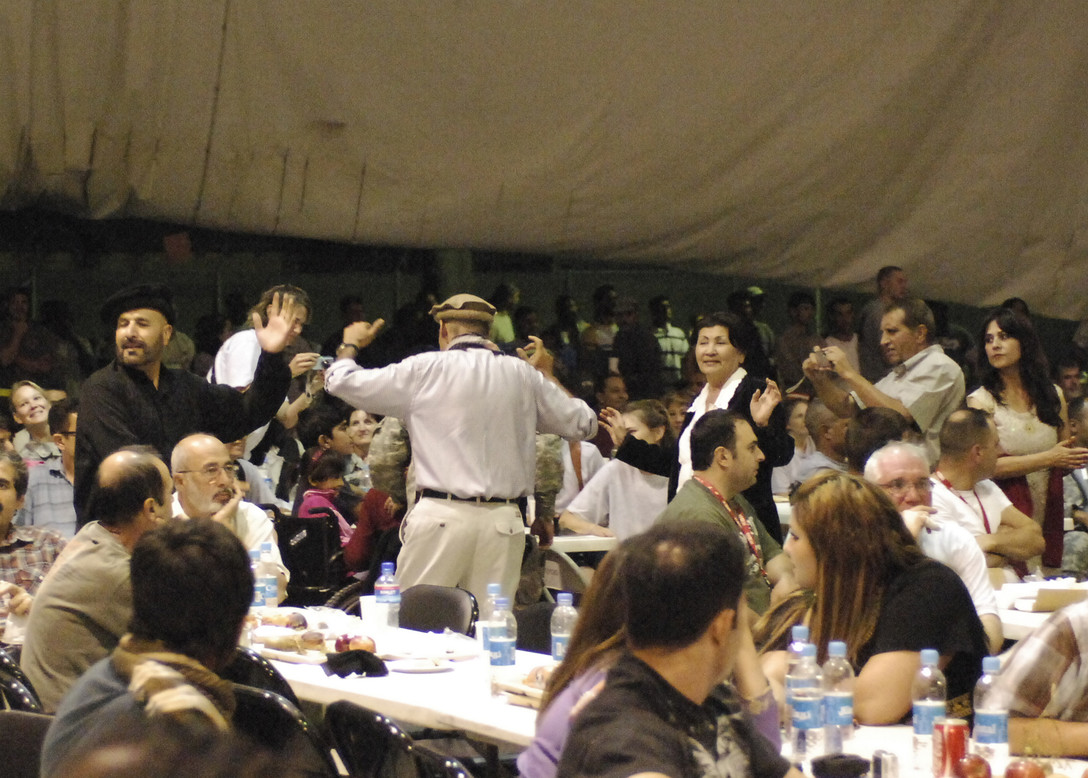 After asking Majid if he ever celebrated Eid in Germany, he expounded upon what a typical Eid would look like in Syria. “Usually I do [celebrate Eid], but here I don’t — I spent it this year at home, playing Playstation. Eid is traditionally about visiting your relatives, and about food. If you are the eldest in your family, all your relatives visit you first; the first day you go to visit your grandma and her eldest son or daughter, and the next day you go to visit your uncles and aunts. The third day is for the children to play and see their friends, and that’s when they are given Eidiyah (a gift given to the younger members of the family by their elders, usually in the form of some money).”

I asked him if he had felt particularly far away from his family during Eid this year.

“I’ve been an exiled person for 8 years, so I’ve been living outside of Syria for a long time. And I  don’t usually complain about missing things back home, I just adjust to the situation I’m in.”

But this year, I even wrote it on Facebook — Eid without visiting my grandma and grandpa is really just another day.

“I spent most of it playing PlayStation or biking outside, because there isn’t an atmosphere of celebration anyway thanks to Covid. People are depressed or staying inside, and I’m a bit tired myself, you know? At least I tried to amuse myself by cooking a proper Ramadan meal with all the traditional Syrian things, such as soup, salad, potatoes, bread, the main dish — and of course, something to drink.” 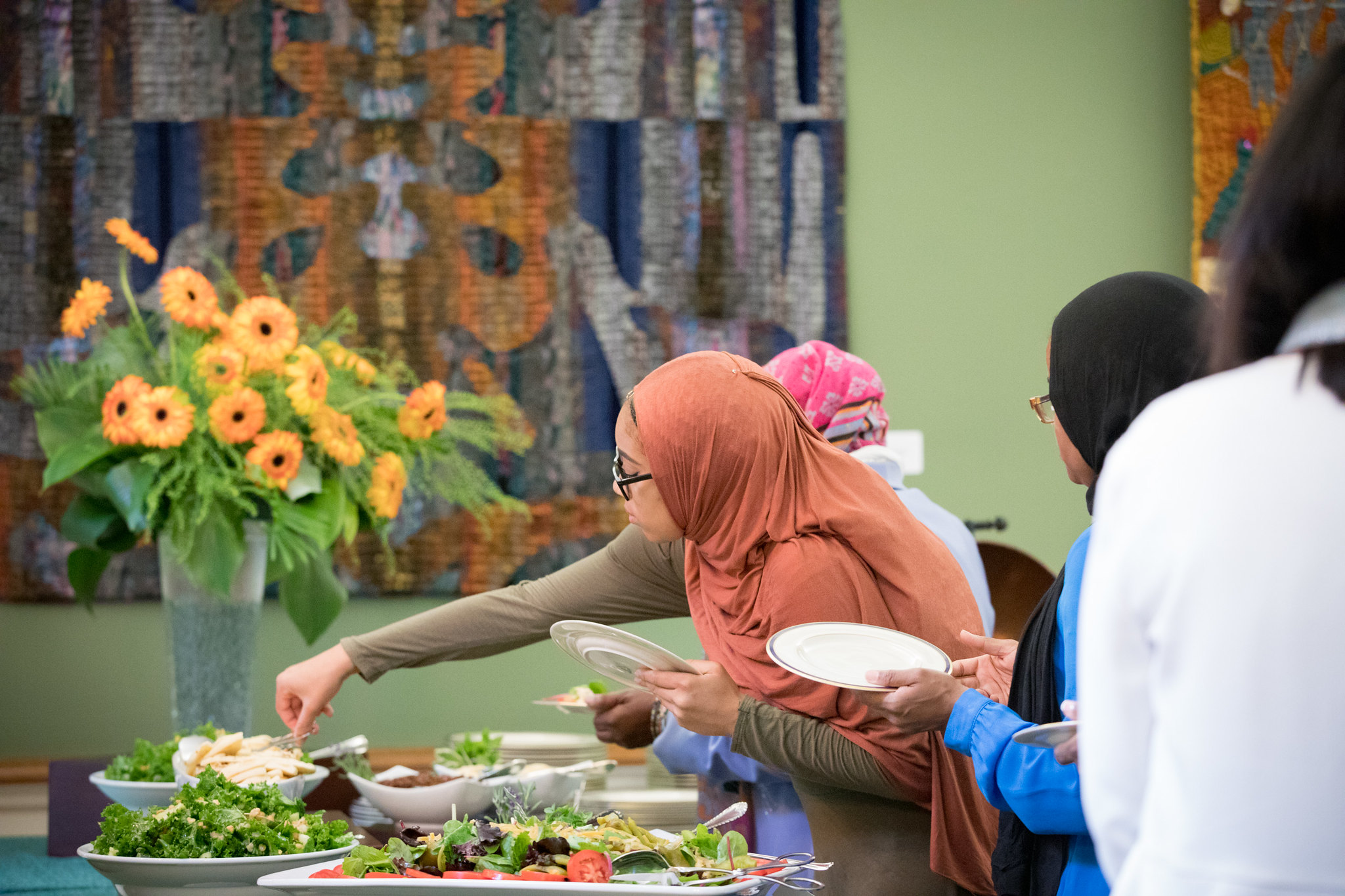 Amjad also gave me an insight on how most of his Eids used to look like, and how he had celebrated it this year. “The first day of Eid means you eat a meaty breakfast — after you haven’t really eaten a lot over the whole month, you eat meat as your first meal. I spent 24 hours with my sister and her husband this Eid, and we had breakfast and lunch together, and then some sweets.

When it comes to Eid, it’s all about the atmosphere of celebration among the people, and you don’t feel that in Berlin. Here, it’s just like every other day.

But he remarked on how he felt after the month was over. “The experience was positive for me at the end, because it was a big challenge. I felt like my mind and body were calm afterwards, and in a way, I feel completely re-energised and reoriented.”