On May 10th, the Open Music School offered its first online workshop on Arabic music or oriental music, as Oudai, the instructor and performer of the event, prefers calling it. Its origins can indeed be found in different world regions: from the Middle East to North Africa, to Eastern Asia and even China.

Oudai Amer is an architecture student in Potsdam and a long-time oud player. The combination of those two passions, designing things and playing music, brought Oudai to construct his own ouds. He built his first oud in 2017, and has, since then, only been playing self-made instruments.

The workshop participants had the chance to listen to Oudai perform on the oud while he was also giving various explanations on the theory and structure of Arabic music, such as the importance of the Maqām, the system of melodic modes, which represents the main difference with “western” music. The different Maqāmāt are techniques of improvisations “that define the pitches, patterns, and development of a piece of music”. “It’s a way of talking without talking,” explains Oudai. Each Maqām has a distinct character, and evokes a specific emotion and atmosphere. It is in this sense that Arabic music theory differs the most from western models. There are a wide number of maqāmāt, and Oudai performed some of the most common ones which are the the maqāmāt of rāst, sabā, nahāwand, hijāz, hijāz-kar, ʿajam, and sīkā.

Oudai performing on the oud

Oudai also mentioned some of the most famous oud players, such as Riad al Sunbati from Egypt and Munir Bashir from Iraq. But you don’t need to go this far to find talented oud players… Berlin is home to a couple of them. Only to mention a few: Nabil Hilaneh, Alaa Zouiten, Aktham Abou Fakher, Mohannad Nasser, Ghaitth al Shaar, Faleh Khaless, and Wassim Mukdad.

“Oud is one of the oldest instruments in the world and you can play every type of music on it!” It definitely seems that there are no limits to playing this instrument.  Searching for Berlin-based musicians, you can stumble upon some oud players playing Rock or Jazz on the Oud.

Alongside Oudai, Mohamed Khoudir, a Berlin-based oud builder joined the workshop from his atelier in Kreuzberg: https://khoudir-oud-boutique.com/. Mohamed introduced his atelier and explained the construction and history of the oud and the other instruments that usually accompany it, such as the bağlama and different percussions. 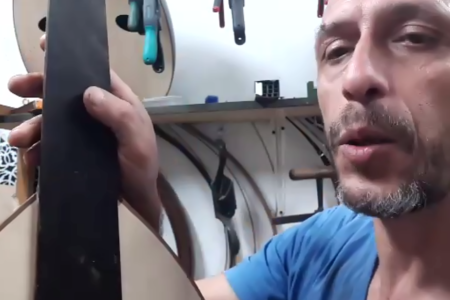 As also mentioned by Oudai, Mohamed explained how Arabic, Persian and Ottoman music influenced each other and are historically connected as they all go back to the spread and expansion of Islamic cultures until the 9th century where they reached the peak of their influence.

The second Arabic music event took place on the 7th of July, this time in person. The Berlin-based band Darawish was invited to perform on the rooftop of Refugio. The band was composed of Abbas who plays the percussion, his brother Hamza on the oud and Milad on the buzuq. Abbas and his brother Hamza started the band to keep a connection to their homeland, Syria, and to give more visibility to Arabic Music. After the performance, the three of them shared the origins and history of their instruments and answered the audience’s questions. 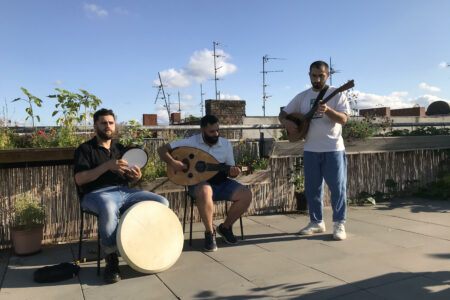 Abbas, Hamza, and Milad performing on the daf, the oud, and the buzuq

Give Something Back to Berlin highlights the diversity of Arabic culture and music. The Open Music School, we are planning to offer weekly oud, bağlama and Arabic percussion classes and the Open Language Cafés will include Arabic to their programme. We are currently looking for volunteers who are willing to share their skills with others.

Watch the recording of the first event on our Youtube Channel: