Interesting facts about the Arabic language

Alhag Ali is a Sudanese refugee based in Brandenburg and studies Industrial Management at Berliner Hochschule für Technik (BHT). As a native Arabic speaker he shares with us some interesting facts about the Arabic language. 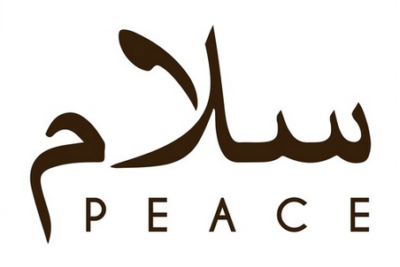 There are quite a few confusing things for language learners worldwide. It’s not a matter of bad or good, just strange. In this short blog post, I would like to tell you about some of the strange rules in Arabic – just to let others know about it. However, I wouldn’t judge the language. For me, even if Arabic is my mother tongue, some things in this language remain strange. One of them is, for example, the “tashkeel”. These are unwritten short vowels, at least in most Arabic texts except Quran and a few other texts. To explore that well, let us consider any word containing three consonants. Let’s take “krb”, in Arabic “كرب”. This word can be pronounced as: kurb, karb, kirb, kurib, kurab, kurub, kirib, kirub, kirab and more. Can you imagine how many possibilities of pronouncing can be if the word contains six or seven consonants? Those unwritten signs imply the vowel of the letter but, unfortunately, are always hidden. This can be one of the most confusing things for Arabic learners. Some people suggest writing the signs on the letter, so any reader can see it and read the letters correctly. However, this can let the writing take more time.

The second strange thing can be explained with the following example. In English, you can say: “I like the shoes of the Italian girls”. It is very understandable for everyone, and you don’t have to ask more. You have to ask every time you hear a sentence like that in Arabic. “Do you really like the shoes of the Italian girls, or do you like the Italian shoes worn by girls?” This confusion happens when the gender of two objects belonging are the same. In this example, girls and shoes have the same gender and form: female nouns and plural forms. This makes it very confusing!

Now we’re coming to the third one. Modern Standard Arabic exists only in religious and political speeches performed by one speaker in front of an audience. When it comes to discussion, you won’t find it anymore. Wikipedia says only 270 million out of 350 Arabic native speakers know Modern Standard Arabic. I have never spoken standard Arabic in my life. It would seem like I was speaking another language if I had to. I bet I would make as many grammatical mistakes as the learners do. Not only that, but I used for a long time to translate standard Arabic for the people in my village, even though Arabic is their mother tongue. So dear Arabic learners: Don’t worry about making grammatical mistakes. You’re not alone. Even native speakers do that. No need to be shy!

See the comparison of different Arabic dialects below. 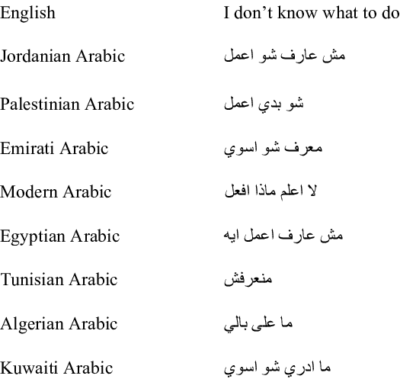 In my opinion, at least for European people, the most difficult letters to master in Arabic “abjad” are the letter “Ayin, ع” and “Ḥā, ح” like at the beginning of the words “Arab” itself and “Habibi”. As far as I know, those letters do not exist in any European language and can signal whether the speaker is a native speaker or not. Nevertheless, many of my friends mastered pronouncing those letters. I wonder how they got to do so! I’ve spent four years of my life just to pronounce the German letter “ü, ue” correctly, and I still fail.

Arabic has an extensive influence on other languages as well. You probably know that English words like alcohol, alkaline, algebra, and coffee come from Arabic. Did you also know sofa, cotton, lemon, hazard, magazine, and many more have Arabic roots? Thousands of years of interaction makes those borrows inevitable. So, why not learn some more of the Arabic language?

Give Something Back to Berlin would like to start Arabic Language Café in 2022 and is currently looking for volunteers. Would you like to join me in teaching (and also learning) Arabic? If so, please get in touch! Write to us at hello@gsbtb.org