December 16 is World Arabic Language Day, commemorating the day, 49 years ago, that Arabic became the sixth official language of the UN. Eva Hangartner, who helps lead the Arabic Sprachcafé at Give Something Back to Berlin (GSBTB), explores why she has continued to learn this poetic language.

When people find out that I speak  شوي شوي عربي, shway shway arabi, or a little Arabic, it is usually because an Arab friend has outed me. After the initial “wallah?!” and widened eyes, the gradual dawning that I have understood (at least part of) the conversation being had, and the occasional implication that I must be Arab – which boosts my speaking confidence and ego tremendously – they inevitably ask where and why I learned Arabic. There are so many layers to my answer, the simplest being that I simply love languages and wanted to learn a widely spoken, non-Western European, alphabetized one. Why I chose Arabic instead of Hindi, Russian or Indonesian is a bit of a mystery, even to me – and so I often flip the question. The more interesting conversation, in my opinion, is why I have stuck with the language, through moves across multiple continents, graduating college, non-Arabic speaking love interests, a job where Russian would objectively be more useful, and the sheer illegibility and difficulty of Arabic to a native English speaker. 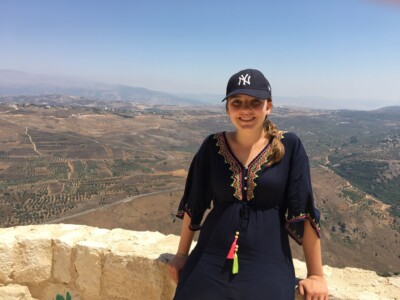 To be honest, some of the reasons are circumstantial. I met my best friend during my very first college class, which happened to be Arabic – at 11:30 AM on September 26th, 2016, to be specific. Having a partner in crime to pour over vocab lists and incomprehensible grammar rules made the initial thrill of learning a language all the more fun. I also loved my professor: he not only was a mentor and confidant as I transitioned into university 4000 kilometers from home, but his love of Arabic was infectious. As the host of a podcast on Arabic music, Arabology, he immediately brought the language to life: through student performances accompanied by the oud and qanun; through extensive appreciation for and analysis of Feiruz’s famous “حبيتك بالصيف” (“I Loved You in the Summer”); through native Arabic speakers who graciously subjected themselves to questions about their families and marital statuses, the few topics which our extremely limited vocabulary allowed us to discuss; and, most memorably, through a concert-cum-meet-and-greet with Emel Methlouthi, known as the voice of the Tunisian revolution and the Arab Spring writ large, and who performed at the Nobel Peace Prize ceremony the year before. I truly had a great first year learning the language.

My personality also drove me to commit to Arabic. I can be very literal, and the unflinching rules of Arabic appealed to me. Even though they were complicated, there are exceedingly few exceptions to the grammar structures, and I could build every sentence according to a formula. I must admit that I relished how unexpected and almost subversive the Arabic stickers on my keyboard felt, and how surprised and encouraging Arabic speakers were that I was interested in their language and culture. Moreover, once I decided to learn Arabic, I wasn’t going to stop until I could communicate to my satisfaction. Spending a summer in Lebanon challenged this doggedness, as I realized that the standard Arabic of my classes was risible in the streets of Beirut. Instead of giving up, I dug in and took colloquial Levantine Arabic, surprising myself when I felt freed of some of the most far-fetched and complicated grammar constructions. As my Arabic fluency increases, it is always externally validating when people ask if I have understood something complex or very quick – which I, perhaps conceitedly, prefer to interpret as faith in my Arabic abilities, and not, as some have jokingly pointed out, as skepticism or a test thereof.

Thirdly, my linguistic and political interests constantly reinforce one another. I joined a Palestinian activism group while in college, and felt that I could not be an advocate if I did not speak – or attempt to speak – the language. How could I understand the struggles in Palestine, let alone the beauty of Palestine, if I understood nothing about the language in which these are expressed? At the same time, I became more attuned to the conflicts and migration crises besetting the Arabic speaking world. As my involvement in Palestinian activism and immigration issues deepened, my commitment to using Arabic in my studies and in my career only increased. It felt like Arabic was opening up a window to so many groups of people, even beyond the Arab world: an Urdu speaking woman who came to the immigration clinic at which I was working started crying when I said that she would be reunited with her children soon, إن شاء الله (inshallah, or God willing).

But the most beautiful and addicting aspect of Arabic is its poetic aesthetic. Calligraphy is the glaring and obvious example, but I also relish the connections between words that the root system enables: the words قبول (qubool, acceptance), قبل (qabala, to consent), and قبلة (qubla, a kiss) are all tied together by the three letters ق-ب-ل (QBL). To welcome someone, you say أهلا وسهلا (ahlan wa sahlan), which literally greets the guest as the one among family and the one in his home, reflecting a much more holistic and entrenched hospitality. To greet someone, there is the common سلام عليكم (salaam aleikum, peace be upon you), but also صباح\مساء الخير (sabah/masa al kheir), morning/evening of goodness, depending on the time of day. Conversants can then build upon this at length, wishing their friend a morning or evening of light, of flowers, of jasmine. To wish someone a good night, تصبح على خير (tisbah ala kheir), you wish that their morning comes with goodness and peace; and the response, وانت من اهلو (wa anta min ahloo), is a wish that the person be among the good. Lastly, when someone compliments you on something physical (your hair, your style, your home), the response, عيونك الحلوين (oyoonak al helween), is that it is, in fact, their eyes that are beautiful or that see the thing beautifully, and not the thing itself. What could be more elegant? Even tongue-in-cheek, call-response insults, whether meant jokingly or seriously, and which I (unfortunately) won’t delve into here, can be so much more circuitous, unexpected, and interesting than those I know in any other language.

These endless sayings and phrases, and the access to so much cultural production and heritage, keep me entranced with Arabic. They motivated me to get involved with the Arabic Language Café at Give Something Back to Berlin, where I can practice the language with like-minded friends. I am grateful to have found a community, both in and outside of the organization, where people from all parts of the Arab world are excited to share their dialects, where Arabic learners are eager to soak in this information, and where everyone celebrates this crazy, beautiful language.