Risktakers: Commited to a World Worth Living In

The world has gone through radical changes over the last decade – climate crisis, wars, human mobility, a pandemic, rise of the far right, inflation, energy and food crisis, just to name a few. While some of these global challenges were felt less intensely in Europe, some of them had a decisive impact on people’s lives and on governments’ decision making.

Europe has numerous civil society actors who vividly respond to these challenges, trying to inform and influence decision making processes. The first report “Risktaker Pulse” of the new Allianz Foundation presents a detailed picture of the present struggles of the European civil society while highlighting some of the risktakers who dare to change the world around them. We spoke with Dr. Simon Morris-Lange, Head of Research, from the Allianz Foundation to learn more about the report.

AN INTERVIEW BY RAGIP ZIK
Communications and Partnerships Director

Ragıp: Hi Simon and welcome to Give Something Back to Berlin’s Magazine! Can you tell us about yourself a bit?

Simon: Thank you for having me. I am leading the research and knowledge-sharing activities at Allianz Foundation. We are taking a systematic look at civic engagement in Europe.

How about Allianz Foundation as a whole? What do you do?

At the Foundation we seek to strengthen those who show courage today to fight for generations, for a better tomorrow. We fund NGOs, artists, and other civil society actors through our grant programs. There are so many people out there doing great work fighting for climate justice and human rights and we want to support them. Not only financially, but also by amplifying their voices so that other activists can learn from them. This is where our research comes in. And this is what the new Risktaker Pulse report is about. Our findings lay the groundwork for additional forms of participation. We provide facts, which become insights, and insights get turned into actions.

Who are the risktakers? How do you identify them?

Risktakers are people and organizations who dare to commit to a world worth living in. They are dedicated to open and diverse societies and climate justice. They leave familiar paths and established ways of thinking to test new approaches for a sustainable future.

We define risktakers as those individuals and organisations who take on the big risks of our time, including climate change, racism, authoritarianism and the ongoing war in Ukraine. Their activism can take many shapes and forms, so in our new report, we decided to focus on one specific group, and that is the leaders of social movements. 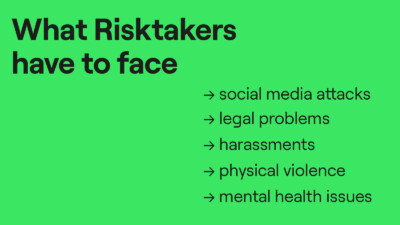 Where did the idea of reporting about the risktakers come from and why should we know about them?

All over Europe and beyond, we see shrinking spaces for civil society and artistic freedom, rising nationalism, more and more social divisions and a climate that is increasingly at risk. Governments alone are not able to cope with these challenges. Neither can corporations. We need a strong civil society to play a larger role here. And we need risktakers to lead the way, especially where governments fall short.

For example, during the early days of the war in Ukraine, the risktakers we interviewed did not hesitate to activate their networks to support people who had fallen through the cracks of official relief programs, such as Nigerians, Kenyans and other non-Europeans who were fleeing Ukraine and often did not get the same amount of help as those with a Ukrainian passport. Risktakers think and act outside the box and we can all learn from them.

How was the research process? Which contexts and cases did you look into?

The research team first identified close to 250 NGOs, social enterprises and other social movement organisations across Europe based on their geographical scope, their following and other criteria. Based on this list, the team conducted in-depth interviews with 59 social movement leaders, representing five countries – Germany, Greece, Italy, Poland and the UK – and working on a broad range of issue areas, including refugee rights, climate action, gender equality and freedom of speech.

Were there any unexpected results that came out of the study?

We were deeply impressed by risktakers’ ability to act fast. Their work in and for Ukraine highlights how much the impact of their networks and nimble structures has been underestimated up until now. Within one week of the Russian invasion, one risktaker and her NGO had already activated her network in Poland and Ukraine to launch an operation to help unaccompanied minors cross the border into Poland. Another interviewee reported how she and her team collected a total of one million euros in donations in only ten days, which they then passed on directly to Ukrainian aid organisations. 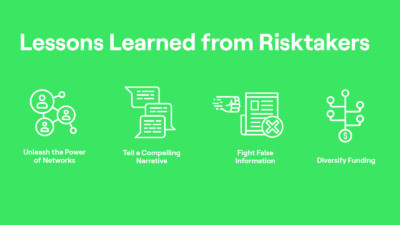 What does the report say to NGOs like Give Something Back to Berlin?

First, respect for the work that you are doing, despite the risks that you have to face! One of our key lessons learned from Risktakers was: Invest in your network, both in and outside of your country! And be sure to educate your funders about the value of a strong network so that they understand that building and maintaining partnerships is not a nice-to-have, but an integral part of active citizenship, which grants should also account for.

What kind of risks are there for migrant and refugee communities in Europe?

The interviewed risktakers warn that structural discrimination and open racism toward migrants, refugees and other marginalized groups could stoke further social division. They see controversial debates around this issue potentially contributing to creating deeper social splits based on identity and race. At the same time, there are many activists who are crafting new narratives and are building new alliances to shape more open and diverse communities all over Europe. Including your organisation.

How can Give Something Back to Berlin’s community be more involved with the risktakers?

Risktakers are not some sort of exclusive club. Yes, for research purposes we did focus on social movement leaders in our report, but our general idea of a risktaker is much more inclusive. Many of them are amongst yourselves, investing their time and talent to address the big societal risks of today and enable better living conditions for the next generations. So, I would say, invest in these committed individuals and the communities they represent, help them identify other activists and grow your network.

Thanks so much for joining us, Simon! It has been lovely talking to you. Before we finish this interview, can you tell our readers where to find the report and how to reach out to you if they have questions?

Much appreciated. The report and my contact info can be found at allianzfoundation.org/study. If you are interested in applying to one of our Grant-programmes check out allianzfoundation.org/apply. There you will also find more information about our Risktakers Fellowship. It aims to create spaces of hope and resilience while facing the multiple and complex crises of our time. Therefore, it supports individuals who meet these crises by developing ideas for desirable futures – in the digital space and beyond.