“A Europe for All without any If and But”

The project “A Europe for All without any If and But” is a social media campaign that promotes a culture of peace and tolerance towards migrants, refugees, and asylum seekers. It uses the power of digital communication to reach wider audiences and particularly young people by mobilising various media actors and influencers who can amplify the voice of the campaign. The project is part of a pan-European initiative called “I am European” led by N.G.O. Mondo based in Estonia. 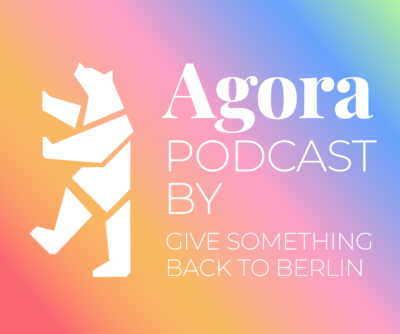 As part of the project, Give Something Back to Berlin is launching its first video podcast series Agora! In this series, we introduce you to some inspiring individuals that contribute to Berlin’s multicultural life. You will get to know some people from the GSBTB community, but also other Berliners such as international activists, politicians, influencers, change-makers, humanitarians, and philanthropists. Not only do these people make a difference in others’ lives, but also form the everyday urban scene of Berlin, the city we love and live in. They will join us to talk about their stories, struggles, concerns, talents, and aspirations. Discussions will provide insights into issues ranging from human rights, diversity, and education to migrant identity and belonging in relation to Europe. Let us take you through a journey to Berlin’s social and cultural life and beyond.

The Podcast is available on our Youtube Channel: https://www.youtube.com/channel/UCckQ52mXVS0ZIVC9843xiFg

Watch and/or listen to our first episode where we talked to the Berlin-based grassroots initiative Deutsche Wohnen & Co Enteignen, which aims at expropriating large housing corporations in order to give all Berliners access to fair housing. Tune in and find out how the current housing crisis has particularly affected vulnerable and migrant populations in Berlin, how the campaign started, its different demands and next steps, including the soon-to-come referendum.