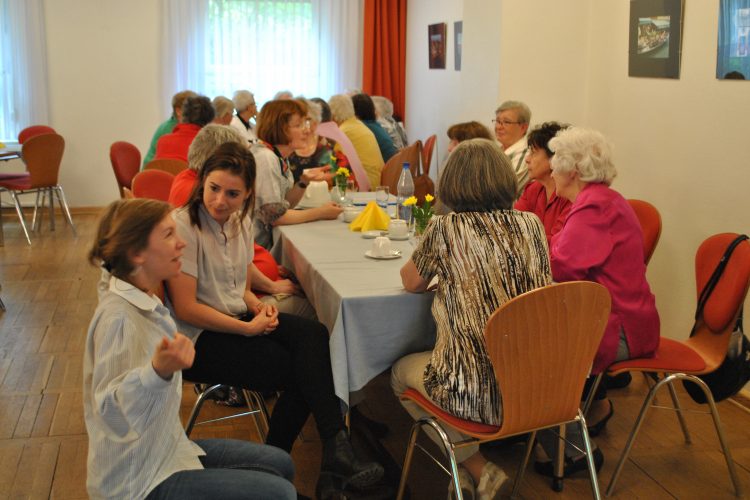 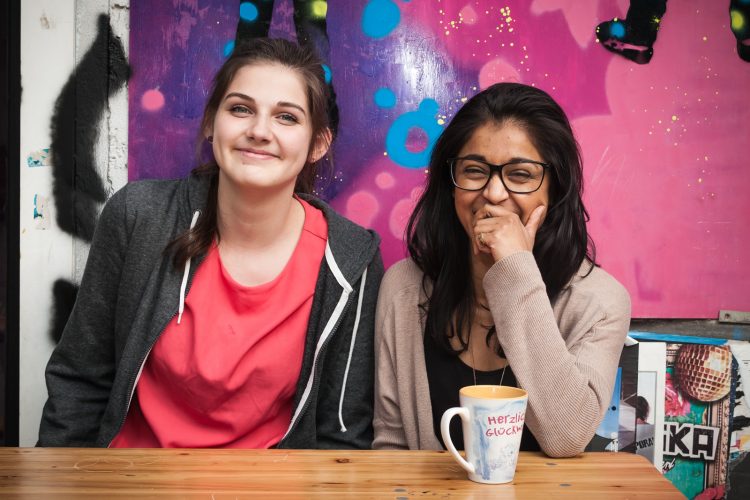 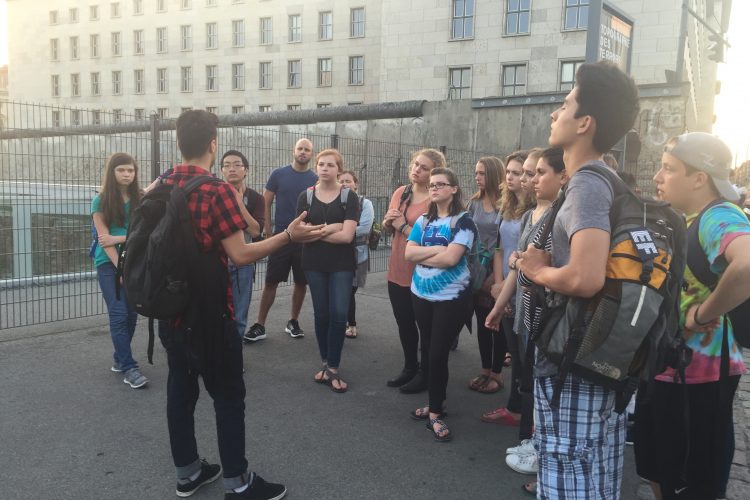 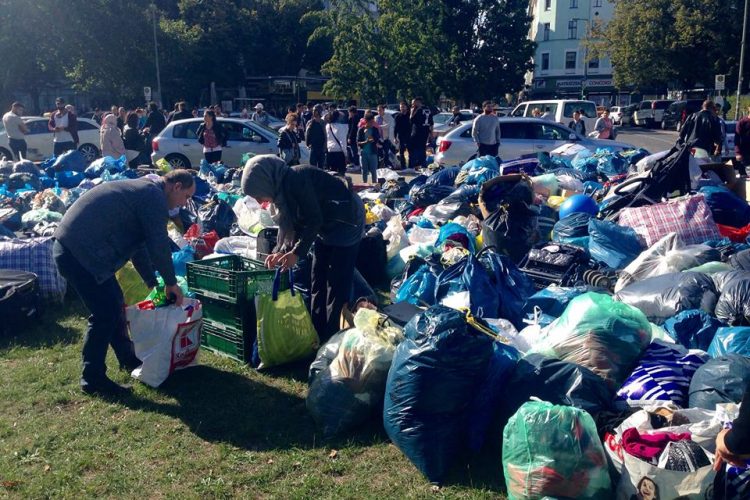 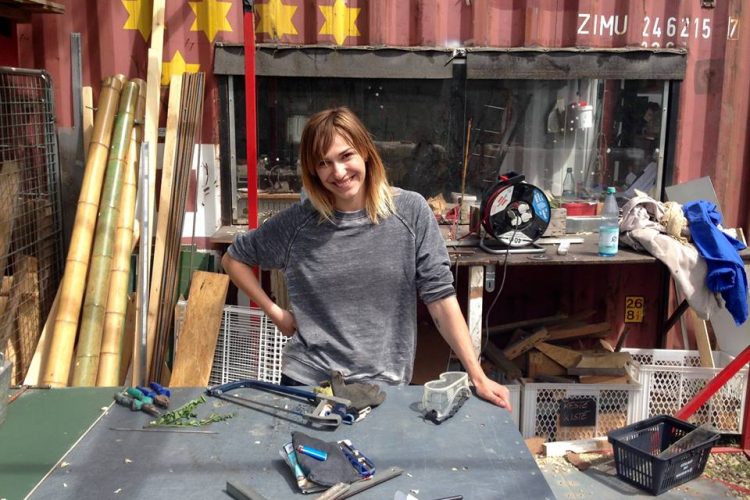 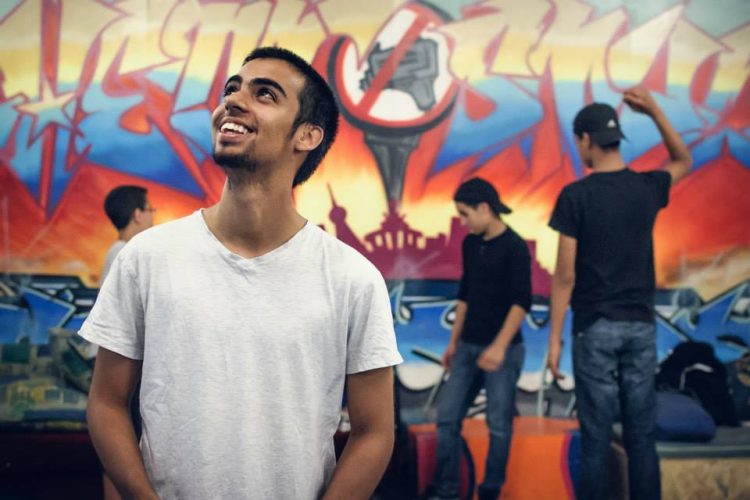 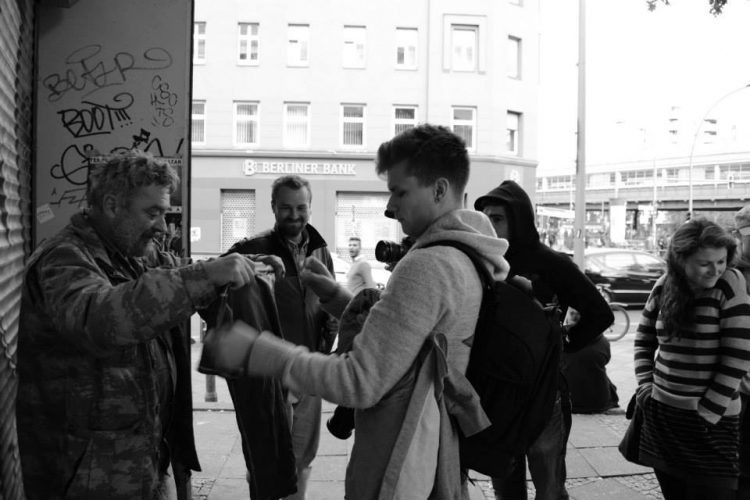 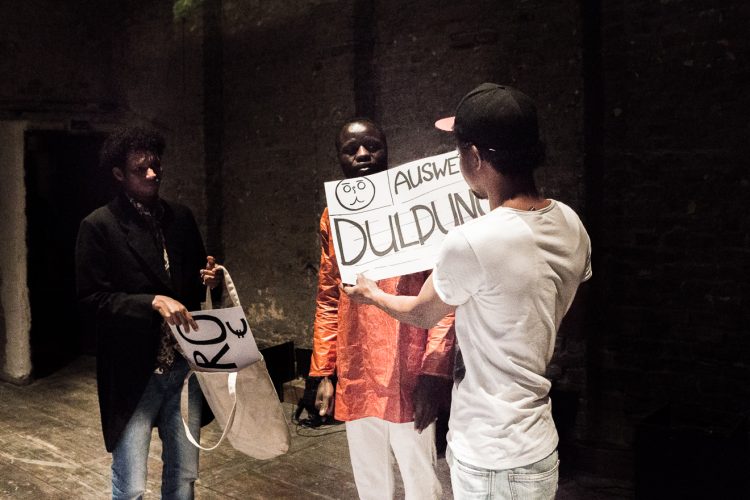 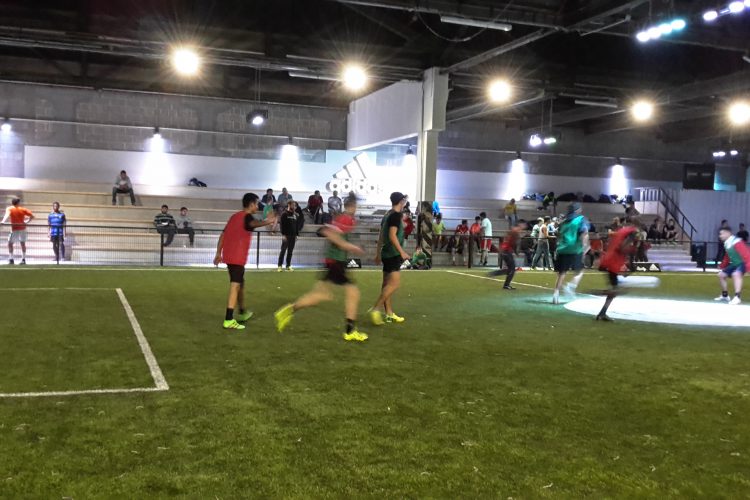 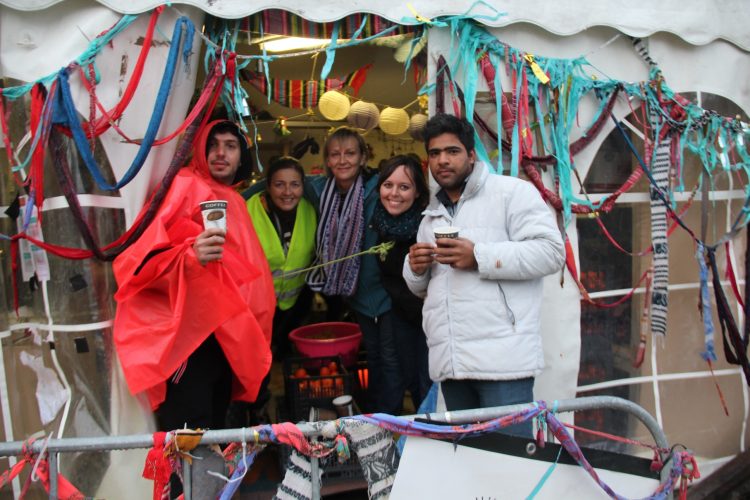 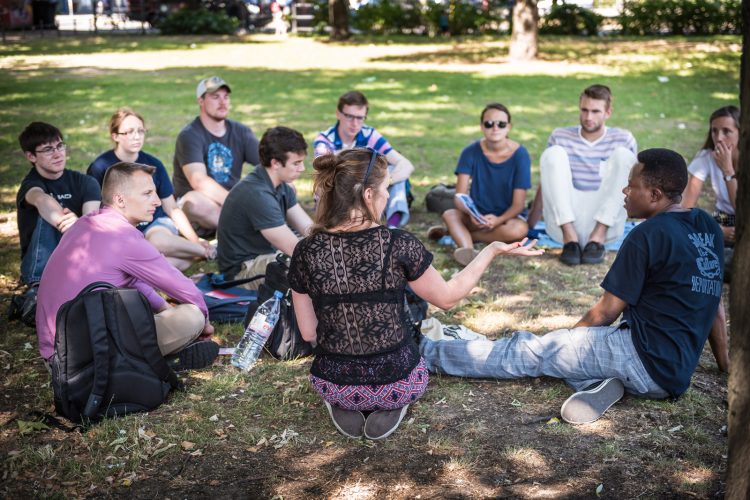 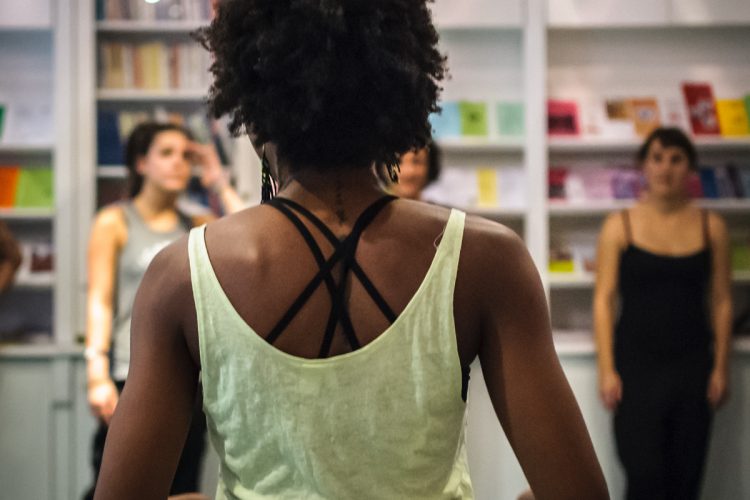 At a time when a lot of media attention is focused on refugees, we are always keen to maintain support for other organisations and people in need, such as the homeless. We are supporting the soup kitchen in Pankow and a shelter in Friedrichshain with GSBTB volunteers who make the visitors feel welcome and give them important basic social contact. The monastery also runs help services for the homeless; establishing positive social contact in the soup kitchen can help people make the next step to talk to these services.

We also support the Kälte Nothilfe, who provide food and clothing for the homeless, especially during the cold winter months. For our volunteers who hand out clothes and food, it can be a rewarding opportunity to talk to someone new. As one volunteer put it: “I would say it was a success. The majority of donations were clothing and blankets. However, there was a lot of food also. The reception from the homeless people was very good and most people started to have a chat.”

Creative workshops with the disabled

We supply volunteers to a number of projects working with people with disabilities in the city. For example, GSBTBers have been running workshops and organising activities for people with learning disabilities in Moabit for more than three years – one of our volunteers has been with then since the beginning! They have organised boat trips, watched football matches, cooked on a weekly basis and held art workshops.

Together with the Neukölln city council, GSBTB organised and hosted a ‘Neighbourhood Day’ in the famously diverse area of Neukölln. Focusing on the history of migration in Neukölln, it gave residents the opportunity to get to know different sides of migration and several of the great initiatives operating in their neighbourhood. The tour ended with a communal meal in a big Roma housing collective and offered the chance to make connections, learn, share and discuss our neighbourhood.

This project started with a request from migrant women to learn how to bike in Berlin and soon became an opportunity for women from all over the world to meet monthly, get to know each other and share a common interest. Since its start, GSBTB has been sending heaps of volunteers here who’ve been contributing to building up the project.

Many, many shifts in emergency shelters

We work closely with various emergency refugee shelters so that we are up-to-date with their needs and can quickly send volunteers to help out without getting held up by bureaucracy. We have matched lots of volunteers to help with signing in new arrivals, handing out clothes and generally supporting the stressful situation in the shelters. We’ve also found many Arabic speakers who help out at art workshops for refugee children in Wilmersdorf, translating for the art therapists. We did several creative workshops and social events for and together with the refugees there.

Through GSBTB’s refugee projects a lot of refugees and non-refugees met and got to know each other where worlds had previously been divided. They became friends, real friends, not just “refugee friends”. Friends that you hang out with casually, go to the club drinking with, call for help when you need it, drink tea with on your balcony and call when you are angry or have something exciting to say. Something so simple and yet so hard when worlds are kept apart.

SoliNaR is a project based in Neukölln that brings together neighbours from different cultures, age groups and social backgrounds. GSBTB supports them with a variety of projects, including a weekly cooking group, art and craft events for children, Berlin sightseeing tours and a refugee buddy program. With these diverse projects they pursue a similar goal to GSBTB: to offer opportunities to establish new connections and friendships in a multicultural surrounding.

Neuhardenberg is a small, isolated village in Brandenburg where refugees from different countries have unfortunately experienced anger and resentment from the locals; unlike in Berlin, there is almost no volunteer support and no activities to mitigate migrants’ loneliness. Thanks to the many GSBTB volunteers who provide car rides, decorations, food, clothes and presents, we are able to get there and spend one day each month with them, organising games, art and music activities.

Coking group for children at a social centre

A Greek PHD student learning German from German kids with all sorts of migrant backgrounds while teaching them healthy cooking? Why not?! The weekly cooking group at the lovely community centre Elele in Kreuzkölln made it happen. Every Friday they met to cook, learn and share. According to Christine, the woman running the organisation, it became some of the kids’ favourite day of the week.

The Feldfinders project works with children from different backgrounds, using the massive, beautiful Tempelhofer Feld as a place to do sports and fun outdoor activities together. Originally focusing on children with foreign parents who were brought up in the neighbourhood, more recently they have been working with newly arrived refugees and we’ve been helping them out. Our volunteers often bring their own skills to the project, whether it’s kite-flying, skateboarding or football.

During the Summers GSBTBers help out at several neighborhood summer parties. For example, the ‘Oldies and Goldies’ summer street party in Prenzlauer Berg celebrated the older residents of the neighbourhood and brought different generations together. GSBTB volunteers helped out with everything from setting up decorations for the party, playing music and cooking for the guests.

Theatre project with refugees and Per Aspera

The theatre group Per Aspera organised a refugee solidarity performance event. The performance provided a stage and an attentive audience for members of the refugee community to tell their stories through artistic expression in whatever form they chose, whether it be music, poetry, theatre, dance, film, or something else. GSBTBers cooked and catered for and together with the participants during the whole long week of rehearsals and the performance.

After school activities at a community centre

Since 2014, GSBTB has been involved at the community centre Martha Gemeinde in Kreuzkölln. The centre is open everyday for kids from the neighbourhood to come play, do sports, get help with homework and develop their own creative ideas! GSBTBers have been acting as mentors as well as doing activities for the afternoon programs. GSBTB has also run refugee cooking events there.

Mentoring and tutorial at a girls’ club

With some short breaks for holidays, mentors and girls from the girls club Schilleria in Neukölln met every week for over a year in a GSBTB English mentor co-operation. Initially the focus was on German-English language exchange and getting help with homework, but with time it developed into true friendships sharing stories, problems, hopes and ideas for the future.

Various projects for the elderly

We’re helping to combat the isolation and loneliness that a lot of old people in elderly homes can experience. For our young, international volunteers this an opportunity to improve their German or just spend time with an older generation they might not normally have contact with in Berlin. These are two groups who would not otherwise meet and can learn from another, gaining different perspectives. We work with various homes, for instance in Wedding and Treptow.

In our collaboration with the Nachbarschaftszentrum Neukölln, GSBTBers help to organise monthly excursions for elderly citizens in the area. For people from disadvantaged neighbourhoods, these trips are a unique opportunity to explore different areas of Berlin.

Streets of Berlin is a storytelling project whose participants interview homeless people all over Berlin giving them a voice and creating a platform for sharing their stories. GSBTB has been supporting the homeless project Streets of Berlin since early 2014 and helped build up the project with expertise from our volunteers and creative community. You can visit their Facebook page here.

Before the Gerhard Hauptmann Schule was evicted, GSBTB started up a weekly computer and internet class for the refugees living there. We also collected computers for them and installed wireless W-lan (wifi) in the whole building to enable them to stay connected with home and friends.

Building a sensory wall at an elderly home

Together with the Lutherheim elderly home we gathered a group of GSBTB creatives to build a sensory wall for people with dementia. The day became a kind of a social event and the golden Berlin oldies were excited about the helpers from all over the world coming to visit.

Where does our food come from? Not always the easiest question if you are a kid growing up in a big city. One way to ensure that our next generation of Berliners are eco-savvy and aware of where their veggies come from is to grow them together. The project GemüseAckerdemy is helping school kids grow one full cycle of delicious vegetable crops from start to finish in their gardens in Mitte. Since 2015 GSBTB has been involved in sending summer volunteers to help them out in their garden.

Dance workshops at a support centre

Sometimes GSBTB works as a catalyst for completely new projects and creative collaborations. Through our website and community team up events we connected three people with similar ideas and motivations. A choreographer, a dancer and a therapist got together and developed a concept for therapeutic dance workshops. They started offering them at our project partner Selbshilfezentrum Neukölln and are now running them in several organisations over Berlin. Recently they even received financial support from the EU to further develop the project!