Nowruz or a new beginning!

This Saturday, around 300 million people around the world will be celebrating Nowruz. We talked to one of them, Fayaz Ghaznavi, a member of our community, to know more about this important celebration that marks the beginning of spring and the Iranian calendar’s first day.

Nowruz comes from the word “Now”, which means new, and “Ruz”, which means ”day” in Farsi. As Fayaz explained it to us “all the old things should be put aside and it is time to start something new” on this day. An important ritual carried out before Nowruz is the khana takani practice which means “shaking the house” and is said to be at the origins of the spring cleaning practice that is common in many cultures. Fayaz was lucky this year, because his mum helped him with this task. This is so important for my mum, and she was already at my place a week ago to help me clean my whole apartment, he says. As it is the case with most of the other rituals guiding Nowruz, the idea of a new start is central.

Fayaz grew up in Afghanistan but also lived in Iran. He has been in Berlin since 2015. It is around the same time that he joined the English Language Café and that he became one of its most active members. He had such a positive experience: “I’ve always had a big interest in languages because I wanted to travel […] But I met a lot of people at the language café and made new friends from all over the world.” Nowadays, the meetings only take place online, but Fayaz still takes part every week: “I don’t enjoy it as much as before because I’m the kind of person who likes being outside and meeting people. But still, I’m not giving up”.

The new year is supposed to start at the exact moment of the spring equinox, which this year will happen on Saturday at 10:30 Berlin time and will mark the beginning of the year 1400 according to the Persian calendar. But often, the transition to the new year happens overnight. Fayaz recounts his mum ordering him to stay awake because, as the saying goes, “if you are sleeping at that time, you will be sleeping during the whole year. But if you are awake, you will be awake during the whole year!”

The origins of Nowruz go back to the religious tradition of Zoroastrianism, which was the dominant religion for much of the history of Ancient Persia. Besides Afghanistan, Nowruz is also celebrated in Iran, Iraq, Tajikistan, Uzbekistan, Azerbaijan, India, Pakistan, Turkey, the regions that have been under Persian influence. 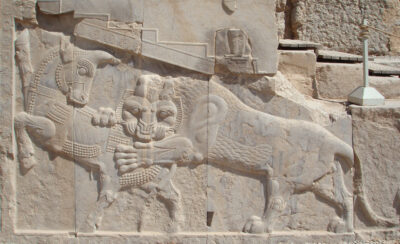 Lion and bull in combat (from Persepolis) / Wikipedia

Many rituals and traditions guide the celebration practices of Nowruz and they vary from one country to another. In Iran, the festival continues for the whole first month of the year. In Afghanistan, it lasts for the two first weeks. The preparations usually start several days beforehand, mostly on Charharshanbe Suri, the last Wednesday before the New Year, during which the fire jumping tradition takes place in Iran. It consists of jumping over small bonfires that people light in the streets shouting “Zardie man az to, sorkhier to az man” which means “May my sickly pallor be yours and your red glow be mine”. The ritual stands as a symbol for getting rid of all the unpleasant things that happened in the past.

The most famous tradition is the “Haft-Seen” and it, of course, involves food. It is about decorating a table with seven things that start with the “sin” letter of the alphabet. All the seven have a meaning. Haft-Seen mostly include Sumac (crushed spice of berries) which stands for sunrise and the spice of life, Senjed (sweet dry fruit of the lotus tree) for love and affection, Serkeh (vinegar) for patience and age, Seeb (apple) for health and beauty, Sir (garlic) for good health, Samanu (wheat pudding) for fertility and the sweetness of life, and Sabzeh (greens; usually sprouted wheat grass) for rebirth and renewal of nature.

Fayaz explains that in Afghanistan, there is “Haft-Miveh” tradition instead, which means seven fruits: “You have to leave the dry fruits (mostly walnuts, cardamon, raisins) in water during the two days before the new year starts. The water then usually becomes very sweet, which I really like”. 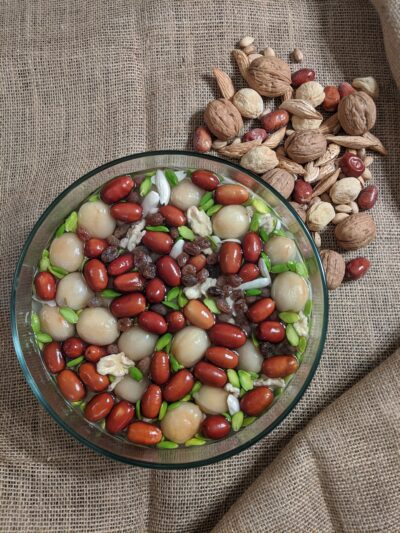 But most importantly, Nowruz, as it is the case with many celebrations, is about being with your loved ones: What I like the most about Nowruz is the atmosphere and spending time with my friends and family. Traditionally, we would invite a lot of people and cook a lot. This year, of course, it will be different, says Fayaz.

The youngest family members would visit their older relatives and wish them a happy new year. They usually wear new clothes for similar reasons Fayaz explained regarding cleaning and sleeping: “The way you enter the new year is how your whole year will look like”. The youngest family members would then also receive an envelope containing money: As a child, I would mostly look forward to Nowruz because I would receive money, admits Fayaz. “But it comes with the obligation for the younger ones to visit the older members of the family”.

Fayaz, during his stay in Turkey

It seems that Nowruz is taking on all its meaning this year. Around the same time a year ago, we were facing the outbreak of the pandemic, and our lives started shifting. Leaving the old and unpleasant behind and looking forward to something better seems to make sense. As GSBTB, we want to use this opportunity to wish everyone a happy Nowruz and a fresh start in the spring full of possibilities.

“The gentle breeze will blow a new
Vitality to the barren earth.
The old will become young.

Persian Lilacs will offer the white lily
Their fragrant red cup.
The narcissus eye will glimpse the anemone.

Because of the tyranny of separation endured
The nightingale shall speed
Into the rose garden bursting with song.”