The idea is simple: newcomers meet up with other Berliners to cook, eat, share and hang out. Since we started, in the summer of 2013, we’ve regularly enjoyed traditional dishes from Sudan, America, Syria, India and many other places all over the world. Our regular gatherings give newcomers the chance to make new friends, offering an escape from what can be a difficult life as the new person in town. The Open Kitchen takes people out of their isolation in a new city and gives newcomers a chance to get to know new people through relaxed but purposeful activity where everyone has something to contribute. 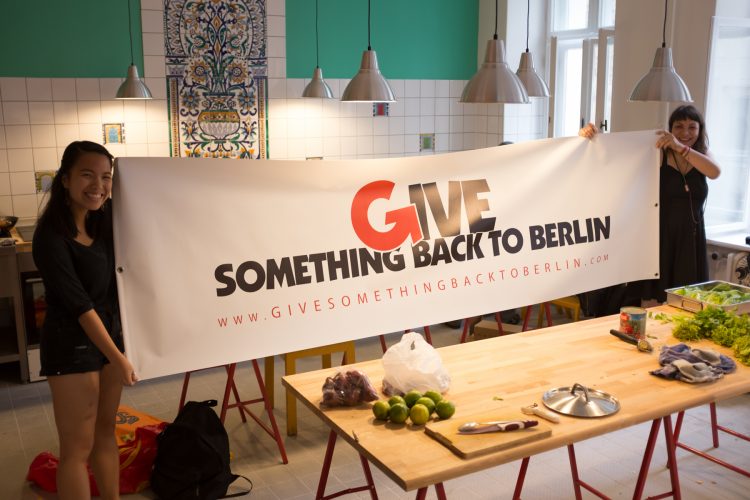 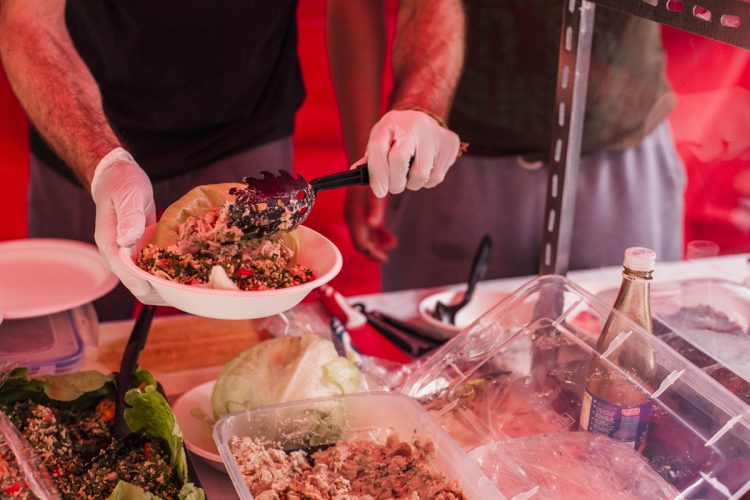 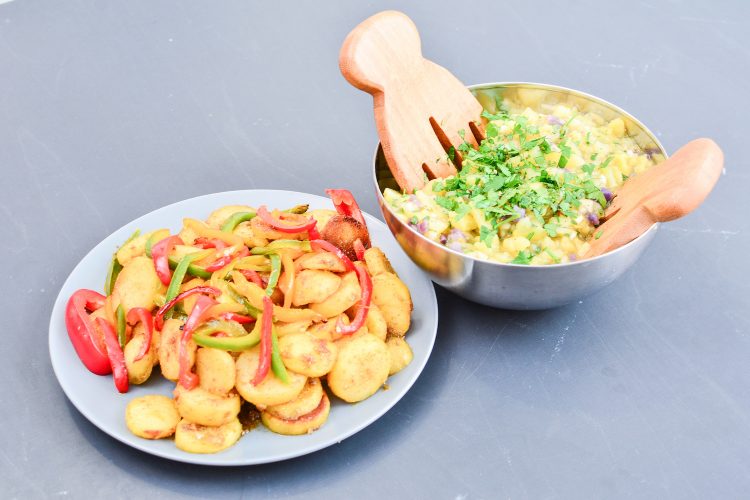 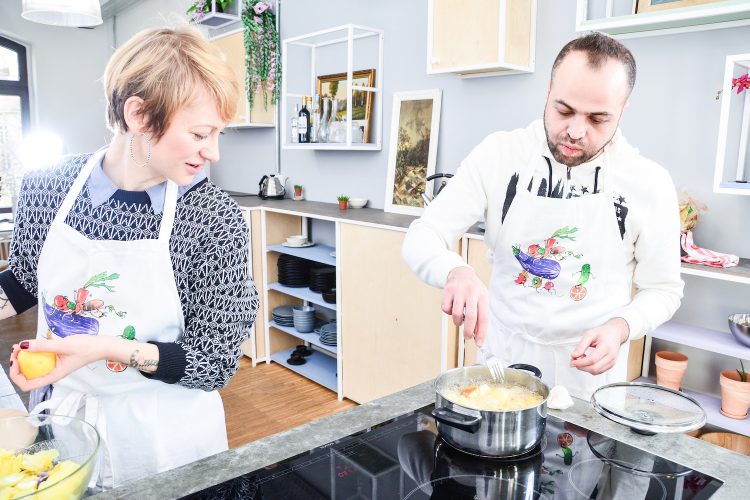 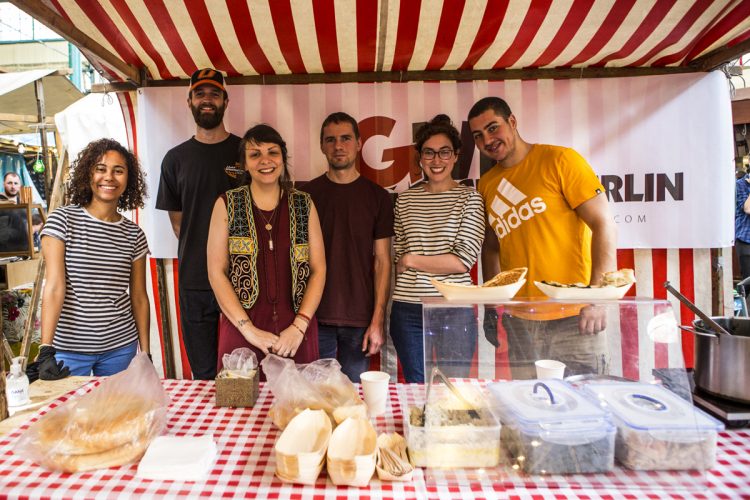 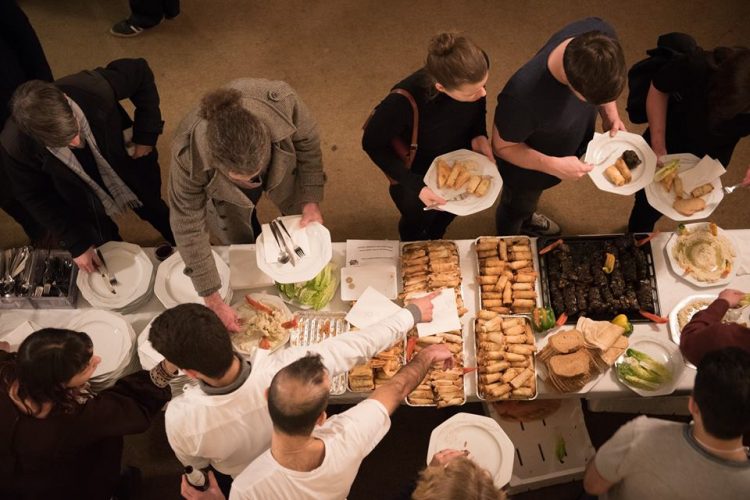 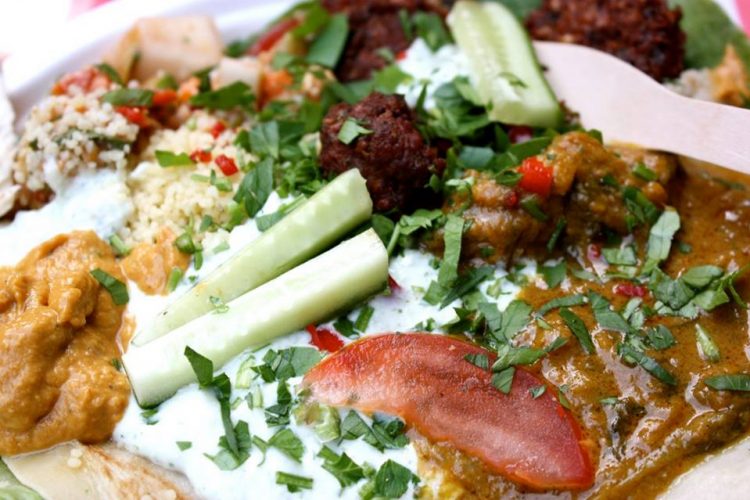 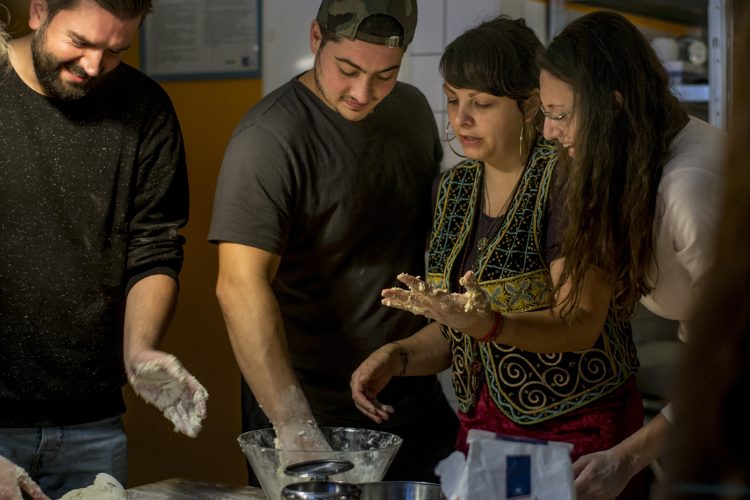 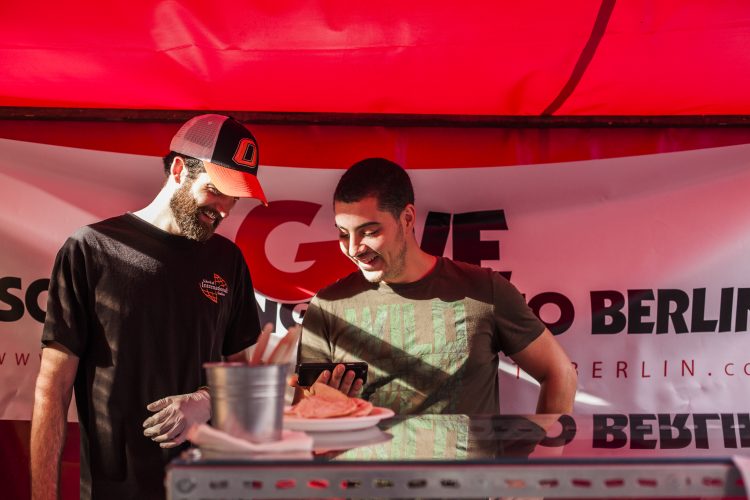 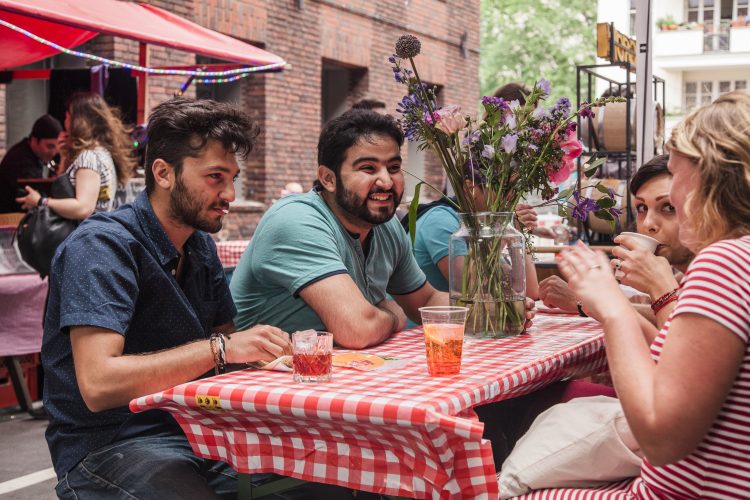 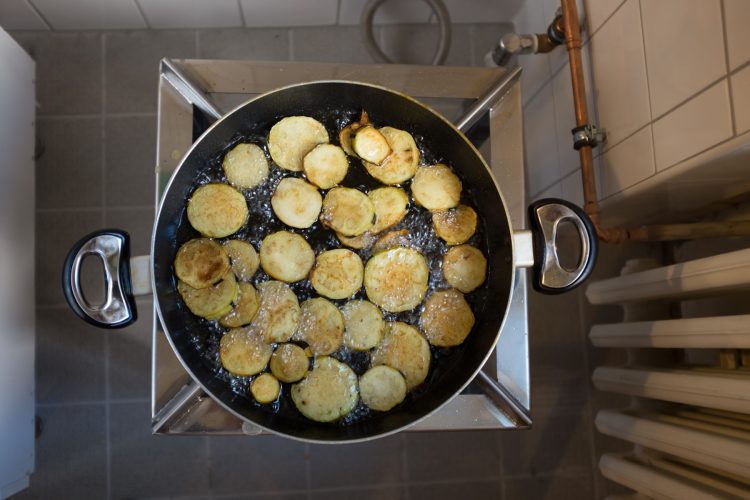 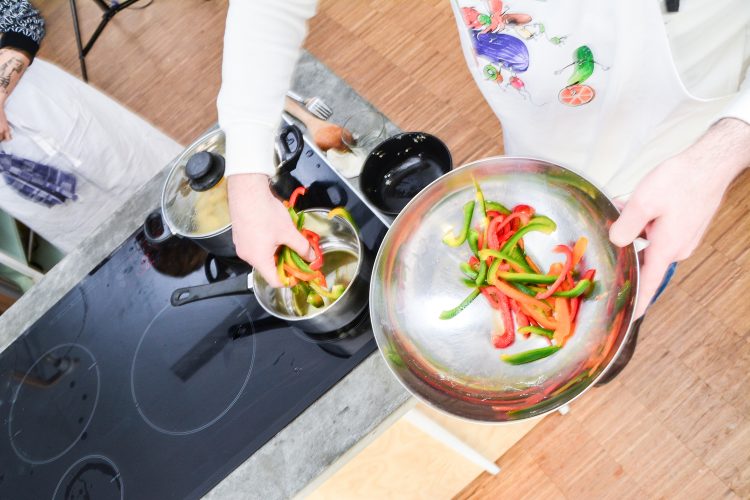 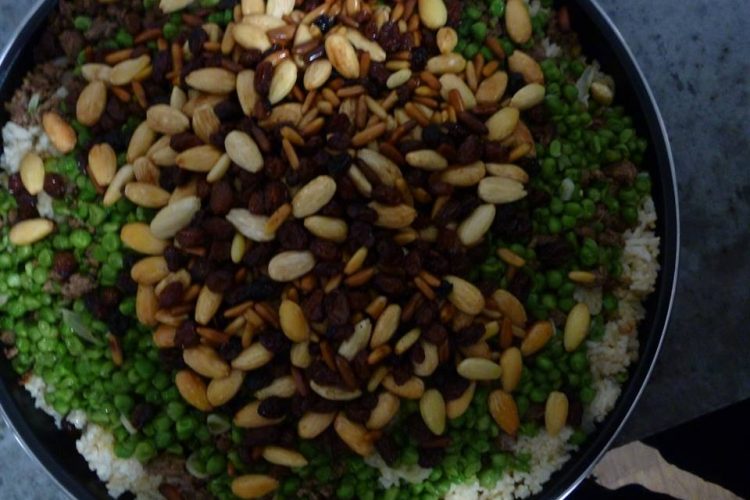 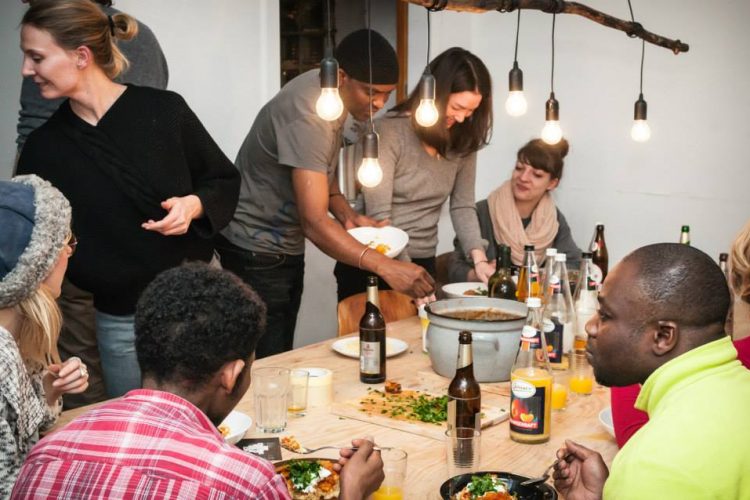 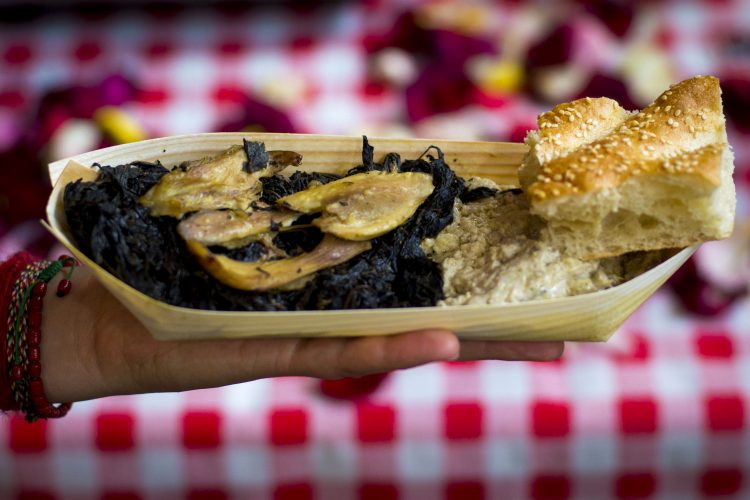 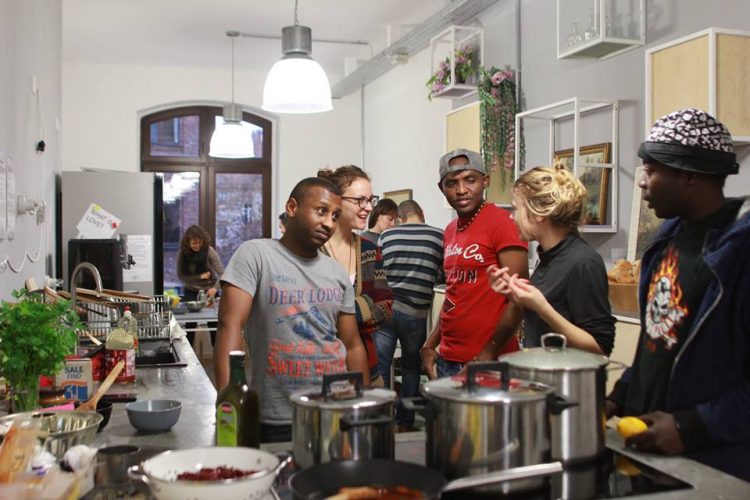 Originally called the Refugee Cooking Group, this was GSBTB’s first own project and was a close, joint effort with Berlin’s refugee community. The cooking group goes back to very humble beginnings on Oranienplatz. This Kreuzberg square was occupied by refugees in 2013 to draw attention to the appalling living conditions for refugees all over Germany, at a time when this was hardly discussed in the media. Berliners from all over met up at the square every week to cook in the tents and break down the walls created by terms like ‘refugee’.

Since then we’ve cooked at the Gerhard Hauptmann Schule – the site of refugee rights protests in 2014 – as well as in Görlitzer Park and at the Martha Gemeinde Church. We moved our weekly cooking sessions to creative co-working space Blogfabrik in 2015, just down the road from where it all began at Oranienplatz. Now, since the summer of 2017, we have a monthly meet up and other regular dates in the kitchen and café at Refugio and we’re really excited about sharing this space and the beautiful rooftop with our community.

Professional opportunities for our community

Ocassionally our group gets invited to serve up delicious international dishes at pop-up cooking events like Bite Club, United Street Food at Markthalle Neun, and has even catered at a Berliner Philharmonie event. Here we run with the big guns, dishing up delights alongside some of the city’s best-known street food vendors. In this way the Open Kitchen provides chefs with a refugee background the opportunity to lead a team of volunteers to set a menu, shop, cook and deliver delicious food to hundreds of people – an excellent opportunity for growth in their new home. In this way, several people in our community have trained to work in gastronomy, got their first work experience here in Germany in restaurants and one has even opened his own street food stall.

How do I become part of this project?

We rely on you, our wonderful partners and volunteers to help us make these events possible. You’re sure to pick up some sweet culinary knowledge along the way! Please join our Facebook group or look in our events calendar to see our upcoming events. Any questions? Email Ricarda Bochat.

Read more about some of our actions:

Huge thanks to Booking.com for your support!

The GSBTB Open Art Shelter builds community and shares skills, so together we can dive into the present moment, arrive into calmness, joy and safety, and enjoy sunbeams coming through the leaves.

GSBTB offers free language learning in German and English. As an addition or alternative to more traditional language classes, our meet-ups provide the chance for newcomers to practice their language skills in a social setting. Some partner off with regular tandem partners while others chat in groups targeted to their language level.

Through the GSBTB Open City-project we are creating concrete grassroots tools for more political advocacy for both migrants and refugees making them active contributors in their cities, creating strong networks for participation and inclusion.

Every month Give Something Back To Berlin organises a community event where refugees, newcomers and Berliners of all kinds – Germans, recently-settled, longtime neighbours – come together to meet, mix, learn and share. It's like Facebook and LinkedIn in real life!

This project offers you the chance to ask your questions and receive individual consultation about the German Job Market from GSBTB's professional job coach.

A series of workshops to make our volunteers more confident and more aware about what, how and why you volunteer. The workshops aim towards instilling a sense of self-growth and hands-on knowledge useful in both social work as well as everyday life.

Give Something Back To Berlin is an initiative that connects new Berliners with social organisations and is actively making it easier to give something back to a city we love.

We rely on the generosity of individuals and corporations to continue our existing projects and expand to reach a wider audience.

Read on to learn how you can make a donation and contribute to supporting our mission and work.